A senior member of Jay Weatherill’s cabinet quit this week, and urged voters in his crucial inner-suburban seat to vote for an Opposition party.

That sounds like it should be kind of a big deal but, because the cabinet minister in question is ‘Major’ Marty Hamilton-Smith (and because politics in SA is increasingly resembling some bizarre hellscape of random lunacy) it instead seems utterly par for the course.

So normal and reasonable, in fact, that Weatherill even put out a media release warmly endorsing his colleague’s “outstanding contribution” in government as a “tireless champion for South Australia’s small businesses and veterans”.

Curiouser still, Treasurer Tom Koutsantonis tweeted his own reflections, which read like one of those ‘pleasantly surprised’ reviews you read on TripAdvisor:

I wasn’t sure what to expect when @HamiltonSmith joined our Cabinet. But his talent & intellect shone through, a constant innovator, always curious for new ideas, offering alternative views true to his values & above all else, he tirelessly dedicated himself to South Australia.

It’s touching stuff – I wonder if they ever share a laugh over the cabinet table about that time Kouts sued Marty for defamation over the Dodgy Documents affair while they reminisce about the Good Old Days.

The fact that it’s now Labor Party insiders – as opposed to Marty’s ideological bedfellows in the Liberal fold or SA Best, which he’s avowedly backing in his seat of Waite – who are lining up to sing his praises and wish him well says much about Hamilton-Smith’s legacy.

And a muddled old legacy it is: as the Libs (and many neutral voters) would have it he is a partisan turncoat who betrayed his erstwhile colleagues to feather his own nest and/or indulge his gargantuan ego. For the man himself, and those who take him at his word, his defection was more about selflessly offering the state stability at a time of great upheaval, and forging some kind of New Politics transcending party affiliations.

As someone who has lately lamented the pernicious prevalence of hyper-partisanship in our politics, the MHS model might have some merit… but, of course, one can’t divorce it from his own will to power, the dogged self-insistence that saw him batter the proverbial door of government until someone let him in.

It’s a tenacity and drive his former Liberal colleagues could have done with more of over their 16 years in the wilderness – an unshakable confidence in the belief that he is Born to Rule.

Or, as it turned out, Born to Be A Minor One-Term Minister in a Handful of Relatively Uncontroversial Portfolios.

Still, the consensus is that he handled those portfolios – Investment and Trade, Small Business, Defence and Space Industries, Health Industries and Veterans’ Affairs – adeptly. Indeed, respected finance commentator Peter Switzer was recently so wowed by Marty’s ‘can-do’ drive, he held him up as something akin to the Second Coming (which, of course, broadly conforms with the minister’s own self-appraisal).

“When I look at an energetic and committed small business-oriented politician like Martin Hamilton-Smith, I dream about politicians we can be proud of… I’ve seen probably 100 small business ministers since I ran the Australian Small Business magazine in 1992 and then was Small Business Editor for The Australian newspaper, and the current SA Minister is an absolute bottler, compared to so many second rate pollies who’ve held a similar post,” Switzer enthused on his blog, breathlessly confessing that “getting inspired by a politician isn’t something that happens to me too often nowadays”.

But before we all drown in Marty’s magnificent aura, let’s not forget that in his home state the consensus is somewhat different.

In a measured and unhysterical response to his initial defection, The Advertiser labelled Marty “SA’s greatest ever political traitor” and insinuated that he should be taken out the back and metaphorically shot.

The stridency of the response – which seemed broadly echoed around the electorate – was not seen when, for instance, Kris Hanna left a minority Labor Government to join the Greens, or when former Liberal frontbencher Rob Brokenshire re-entered parliament for Family First (now Australian Conservatives), or indeed when former Xenophon affiliate John Darley jumped ship to form his own political start-up.

But if the response Marty has engendered is unique, it is because he has been a singular presence in the state’s political life. Liberals would fairly call him a wrecker, pointing out that in a brief few years he challenged three separate leaders – Kerin, Evans and Redmond – before walking out on a fourth, Steven Marshall. In her recent valedictory speech, Redmond revealed that after her near-miss election loss in 2010, her predecessor “came to my office and explained to me that clearly any electoral success we had enjoyed was because of his policies and had nothing to do with me at all” and that “now that the election was out of the way, it was time for me to step out of the way and allow him to resume his rightful place as leader”.

Needless to say, she said, she declined that “generous offer”.

(Marty told parliament after the speech Isobel’s version of events “misrepresented the truth” and the conversation was “actually more about the hissy fit that followed my election as deputy leader and the absolute pantomime… where it was pretty obvious she wanted me to resign”. Which he did.)

Yet while there’s a fair bit of justification for the revulsion with which he is held in the ranks of his former party, it’s also fair to point out that he was certainly their most pro-active leader, and may well have become Premier were it not for his impulsive bent to charge at political windmills in such a way that would get him sued by future Labor Treasurers.

But this is the Marty Conundrum: there is the very good, and the very bad – and I fear it is the latter that will mark his political tombstone.

Much as he may fervently wish for South Australians to love him as he loves himself, he will forever be defined not by his administrative achievements in government, but by the manner in which he got there.

And now, by the fact that he has broken yet another pledge to his jaded electorate.

“I remain a Liberal and I’ll contest the next election as a Liberal,” he told Channel 9 in a live interview on the night of his defection.

“And I will face the electorate, because I think I can make a small difference – maybe more than that – to making this Government a better government.”

The manner in which he broke that pledge, via a friendly drop to News Corp’s Sunday Mail – the same News Corp that happily declared him a “traitor” and spent the ensuing years treating him as such – is also telling.

Retiring Speaker Mick Atkinson noted MHS was probably “laughing at The Tiser”, having retired with a solid ministerial record despite “so much malice, hatred and unethical reporting directed at him”.

Martin Hamilton-Smith must be laughing at @theTiser. So much malice, hatred & unethical reporting directed at him by @theTiser, yet he had three good years as a Minister, concentrated on his portfolios and retired at a time when most people retire.

I somehow doubt it’s Marty doing the laughing, and it’s worth noting too that despite his recent bitter critiques of News Corp, Atkinson also chose to announce his own political retirement through a drop to the daily paper.

Perhaps the political ego, after all, yearns for one final front-page headline before the curtain falls.

The weekend’s coverage was not only notably uncritical, it also allowed MHS to opine about Steven Marshall – who, two months out from polling day, was not given recourse to respond – as “a puppet to Christopher Pyne” and “nowhere near [Jay] Weatherill in terms of ability”.

Given it was only four years ago that Marty declared Marshall – his one-time running mate in one of his many failed challenges – a “political soul-mate”, his latter-day observation should probably be taken as a reflection on someone other than the current Liberal leader.

As should the fact that since a Tiser poll showed him garnering a measly five per cent in the seat he’s held – as a Liberal – for two decades, I’ve asked either Marty or his long-time chief of staff and confidante Kevin Naughton several times whether he still intends to stand for election  – including as recently as Friday.

Initially, I was told that while the poll had rattled him and prompted him to consider his future, he had since decided to forge ahead with his promise to face the electorate. On Friday, the response was that there was “no change” in his intentions.

The Sunday Mail interview had already been conducted. 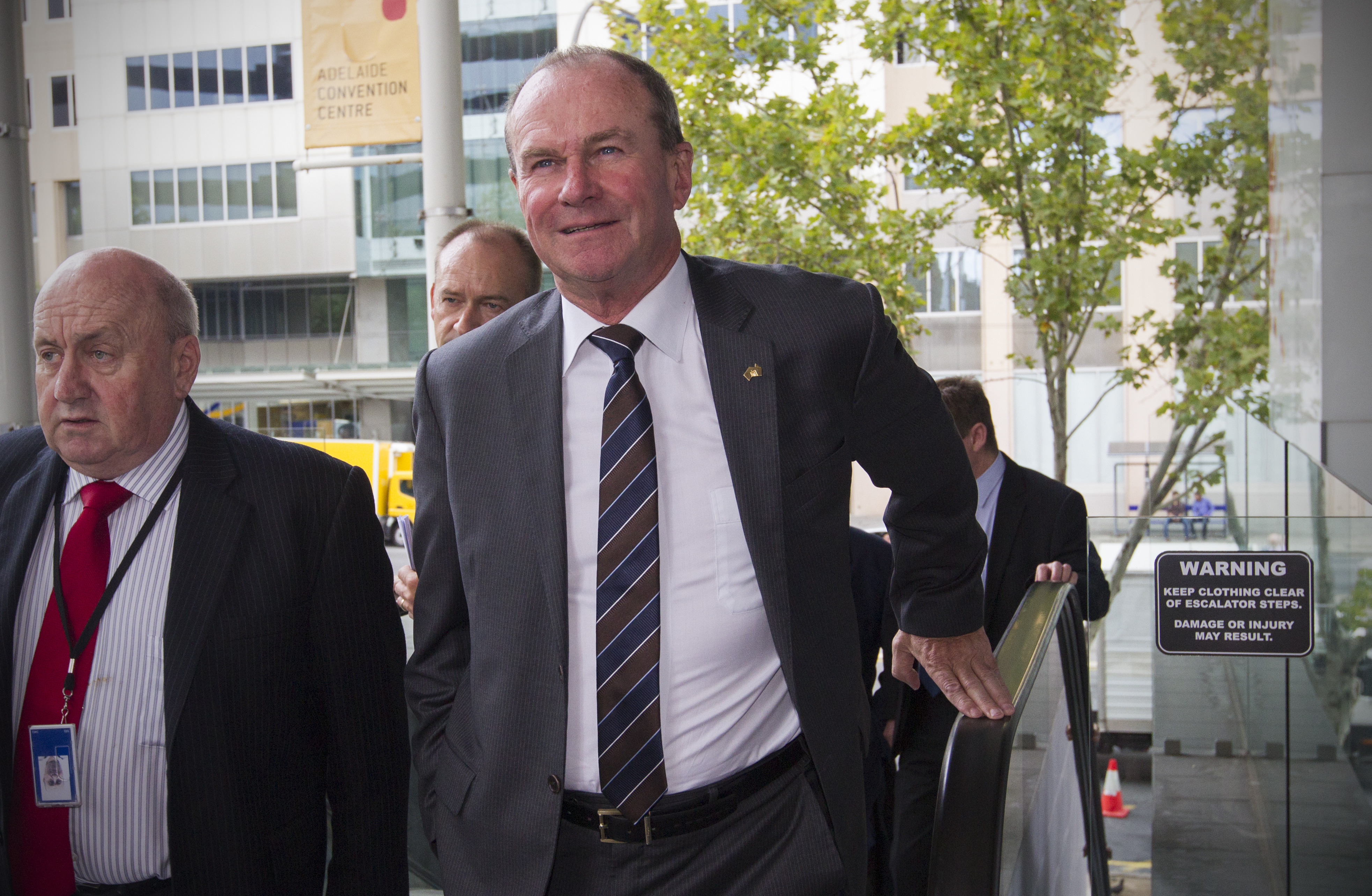 In hindsight, one might be tempted to use a certain word that would transgress defamation laws (or indeed several words), but perhaps it’s best to put it down to the unique peculiarity of MartyWorld, where statements of intent can mean different things on any given day.

It does, however, put a question-mark over his stated intention to retire because he wants to spend more time with his family, his mission finally complete.

Indeed, it seems clear the Tiser poll played a big part in formulating what turned out to be his final political gambit:

Which is a shame, and not merely because having pledged to face the voters of Waite, he has denied them the chance to formalise their verdict on his much-debated defection.

True, he had about as much chance of winning as “Eric the Eel” had of snaring Olympic gold in 2000. But, like the celebrated sort-of swimmer from Equatorial Guinea who sploshed through his Sydney heat in a record slow time of 1:52.72, there would have been a certain nobility in the inevitable defeat.

Less noble the path taken instead, wherein a self-proclaimed “Independent Liberal” pulls the pin and throws his support behind neither the government in which he served nor the Opposition he once led, but a fledgling party whose Waite candidate, consultant engineer Graham Davies, has been a trenchant critic of Hamilton-Smith’s own State Development Department!

Not that Xenophon himself is overly touched by the gesture.

“I’m sure he thinks he’s being helpful, but we’re ok – we can do this on our own,” he said today, in one of the more polite and passive-aggressive rebuffs state politics has seen of late.

But, as a response to his final political act, it’s a telling footnote to Hamilton-Smith’s legacy: that of an isolated figure searching for a platform that would hand him the power he craved, but destined to leave a political pariah, the Billy Hughes of SA politics.