It’s had a skinful.

It just can’t help itself.

At least last time it waited until election day to go on a lunatic bender.

This time round, it started early. The campaign hasn’t even started yet and already it’s making absolutely no sense whatsoever.

On the plus side, today’s Newspoll – which has Nick Xenophon’s SA Best outpolling both major parties on a 32 per cent primary vote, even before most candidates have been announced – pretty much confirms what we already knew.

Unfortunately, what we already knew is that we are heading for the most diabolically unpredictable, fraught and just plain batshit crazy election in living memory, and probably in SA history.

Which, considering how the last one panned out, is really saying something.

In case anyone’s banished it from memory, here’s a brief overview: what was broadly expected to be a Liberal walkover ended instead with a hung parliament, with Labor hanging on to a swag of marginals to fall just one seat short of an overall majority.

The Libs were mired two seats short, but were hopeful of convincing a pair of conservative-leaning independents to side with them – until one of the two was shockingly diagnosed with a brain tumour and took immediate leave. The second independent was convinced he had no choice but to throw his lot in with Labor.

A few months later, a former leader of the Liberal Party was also convinced to jump ship and back the Labor Government, before the ailing independent sadly succumbed to his disease, which forced a by-election at which the Libs were expected to regain their seat.

But another independent candidate, backed by the deceased MP’s widow, split the vote, allowing Labor to win the ballot – and an outright parliamentary majority – by a mere nine votes.

Seriously, you could not make this stuff up.

And here we are, three years on from the Fisher by-election at which the late Bob Such’s seat fell Labor’s way, in the shadow of another poll set to be pondered over for years to come.

No wonder SA politics has wandered off the proverbial reservation!

Indeed, what happened in Fisher is eerily prescient for what looms at the March general election.

Xenophon’s decision to enter the election fray with gusto – in, he says, at least 20 seats – makes each of those 20 seats effectively a ‘Fisher by-election’ scenario.

Simply put, the traditional ‘two-party preferred’ view of the world must be crudely extrapolated from what is effectively a three-cornered contest. In effect, with no party anywhere near the magical 50 per cent primary vote in their own right, the candidate that finishes second in any given electorate is a fair chance to snare the seat.

The Libs had a torrid time in Fisher, spending most of the final week having to pitch their campaign attack against the Lyn Such-backed independent, Dan Woodyatt (as well as having to deal with the fallout of their federal colleague, then Defence Minister David Johnston, shooting his mouth off about ASC’s ability, or lack thereof, to build a canoe). The equation was clear: if Woodyatt finished second, he won. If Labor finished second, they might win, depending on preference flows. Labor finished second, and won. By nine.

It’s one thing to navigate such an equation in a by-election, but try doing it in a general election where every seat is thrown into disarray. How do you pitch a consistent statewide message in such a scenario?

As one Labor MP said to me a while back: “It’s like getting 47 playing cards, chucking them all up in the air and trying to pick which way they land”.

To date, Xenophon has only announced candidates for Liberal-held seats, and would be a fair shot at snaring the likes of Heysen, Davenport or Finniss, all of which effectively have no incumbent after the retirement of a swag of Liberal veterans. But he would fancy his chances in Labor-held seats like Elizabeth, Taylor, Playford and Enfield too, if he can find credible candidates who can maintain some semblance of discipline throughout the campaign.

Throw into this mix the prospect of a range of credible former major-party candidates in a glut of seats – Frances Bedford in Florey, Duncan McFetridge in Morphett and Troy Bell, who retains strong support in Mount Gambier despite the charges he is contesting in court – and the outlook becomes ever murkier.

Perhaps the threat from these disgruntled ex-partisan candidates is overstated, given they are relatively unlikely to vote against their former colleagues if it comes to it.

But their prevalence is symbolic.

And, after all, if you’re seeking to send a protest vote against the political establishment without compromising your ideological outlook, what better way than to vote for a disgruntled major party refugee?

For the narrative of modern politics is far less about left and right than it is about insiders and outsiders.

Unaligned voters increasingly favour the anti-establishment: hence the triumph of Brexit, the rise of Trump, the resurgence of British Labour under Corbyn.

Their successes came, often, against all reason and despite broad media antipathy; the media, after all, are now considered part of the establishment, the insiders.

The response of the old guard – as I reflected recently – is to further retreat into hyper-partisanship, to barricade their principles and beliefs behind an impenetrable drawbridge of tribalism.

As of today, Nick Xenophon’s latest foray into state politics has already helped break down the fortress.

There was one suggestion today, reported in The Australian, that Labor and Liberal parties could end in up in some bizarre coalition with each other – formalising SA Best as the state’s main party of opposition.

This won’t happen, of course – but the very suggestion does at least trigger the process of rethinking what these respective parties stand for and why they are here.

And, of course, in a sense they have already formed a coalition of sorts – a campaigning coalition to neutralise the SA Best threat.

The Libs have already spent campaign resources attacking Xenophon – an extraordinary situation for a party that, after 16 years, should be on the cusp of government.

Moreover – and significantly – neither major party can categorically commit to putting Xenophon’s party ahead of their major party opponent in any given seat – including Hartley, where Xenophon himself is running.

“It’s too early to say what this will look like,” he added.

It’s a similar line from Liberal state director Sascha Meldrum, who said: “The party has not made any decision about preferences… we cannot make preference decisions when parties have not yet announced their candidates.”

All of which is fair enough. But you’d be hard pressed to find a historical precedent where either Labor or Liberal hasn’t put their major party opponent last, unless there is a minor party or candidate with an egregiously contentious worldview, such as One Nation, that demands a principled response.

For both parties to be unable to categorically commit to preference their major party opponent below Xenophon three months from polling day is significant.

Of course, any Lib/Lab preference deal would only help entrench the perception of Xenophon as the archetypal political outsider, which in the short term would probably only bolster his SA Best cause.

As will the refrain trotted out by Labor frontbencher and ALP machine man Peter Malinauskas at a media conference today, when he tried to force Xenophon to legitimise himself.

“Now he wants to be the party of government, which means he needs to meet some basic standards,” he insisted.

“These are all legitimate questions that I’m sure will be asked during an election campaign.”

Indeed they are, and indeed they will. But will they make a difference?

With Trump – as the mainstream media furrowed its collective brow and scratched its collective head that his outlandish policies (building a wall, jailing his opponent etc) seemed plucked from whim with no intention to deliver – the most persuasive analysis was that these ideas were never meant to be literal pledges.

They were symbols, pitched to a jaded electorate to persuade them that he represented a shift from politics as usual.

So does Xenophon, whose appeal – while unique and broadly centrist – is similarly emotional rather than cerebral. And demanding that he conform to a major party stereotype will be about as successful in neutralising his campaign as the mainstream media’s collective outrage was in cruelling Trump.

Malinauskas, incidentally, had the unfortunate privilege of attending a prearranged photo op this morning, during which he had to give blood for the TV cameras – on the day the first statewide Newspoll for two years was finally published. 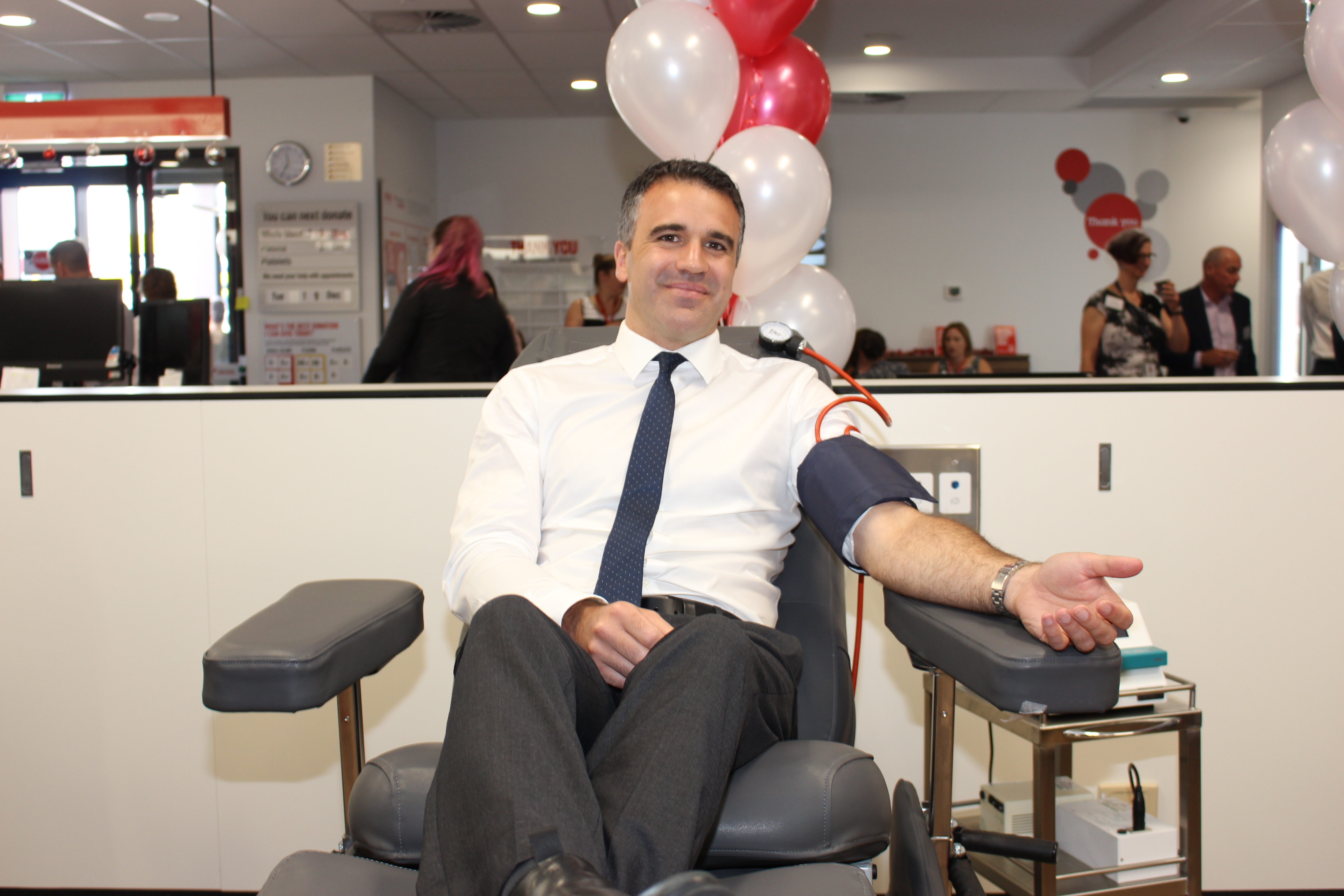 Labor’s primary vote is on life support, as SA Best gives the election campaign a shot in the arm. Photo: Supplied

It must be something about the time of year, because I recall a former Health Minister having another blood donation photo op that coincided awkwardly with a damning Newspoll a few years back, giving the TV news reporters endless fodder for puns about Labor heading towards a “bloodbath”, haemorrhaging votes and so forth.

Mali obligingly followed the script today, agreeing with the Dorothy Dixer that “every election gets the heart pumping”.

Perhaps the more apt imagery of the day would have been a photo op at an RBT.

Because SA politics is clearly, appallingly and mind-blowingly drunk. Again.