Over the term of the Weatherill Government, South Australia’s economic performance has been weak by comparison with Australia’s as a whole and the two leading economies of Victoria and New South Wales.

Any assessment of economic outcome should look over the whole term because annual South Australian economic growth figures have been subject to massive revisions. For example, the increase in South Australian Gross State Product in 2015-16 was announced in November 2016 as 1.9%. This has just been revised down to 0.3%.

The just-announced increase in South Australia’s GSP for 2016-17 of 2.2% is similarly unbelievable in the context of what we know generally about the South Australian economy.

There is no reason to suppose that this situation is changing. On the contrary, the Government’s resort to both employment and investment subsidies (“industry attraction”) reveals an emerging economic crisis. Private investment has crashed. The unemployment rate is only as low as it is because large numbers of South Australians have moved for work interstate.

This dire situation has been covered up by a very large increase in Government investment spending (the ubiquitous road works are supposed to give voters a feeling that things are moving forward). State debt has ballooned from $9 billion in 2013 to $14 billion in 2017, and is projected in the 2017-18 Budget Statement to rise to $15 billion by 2018 – 13% of projected Gross State Product. Nine years ago state debt was less than $2 billion – only 2% of GSP.

In the context of the persistent structural problems facing the advanced economies – resulting in low productivity growth and greater income inequality – inward-looking economic policies are becoming more popular, with adverse consequences for national and state, as well as global, economic growth.

Far from returning to the faster economic growth of the pre-GFC era, the world economy appears to be stuck in a slower trajectory, although there are some developing countries, such as India,  whose economic reform efforts are starting to bear significant fruit.

Hence, the international and national economic contexts for the South Australian economic outlook are also not encouraging.

Table 1, below, shows the rate of growth of Gross State Product for South Australia, New South Wales and Victoria, as well as the rate of growth of Gross Domestic Product for Australia as a whole, from 2013/14 – 2016/17, coinciding as well as the figures will allow with the term of the Weatherill Government to the present time.

What these data show is that SA has grown only very slowly over the term of the Weatherill Government and that, if we keep going at this rate, we will become much less productive, and ultimately poorer, than people in New South Wales and Victoria, notwithstanding the exodus of job-seeking South Australians, to those states, particularly.

Table 2, below, shows the difference in investment patterns between South Australia, New South Wales and Victoria, from 2013/14 – 2016/17, coinciding as well as the figures will allow with the term of the Weatherill Government to the present time.

The labour market outcome of these economic growth rate differences from October 2014 to October 2017 is shown in Table 3, below. 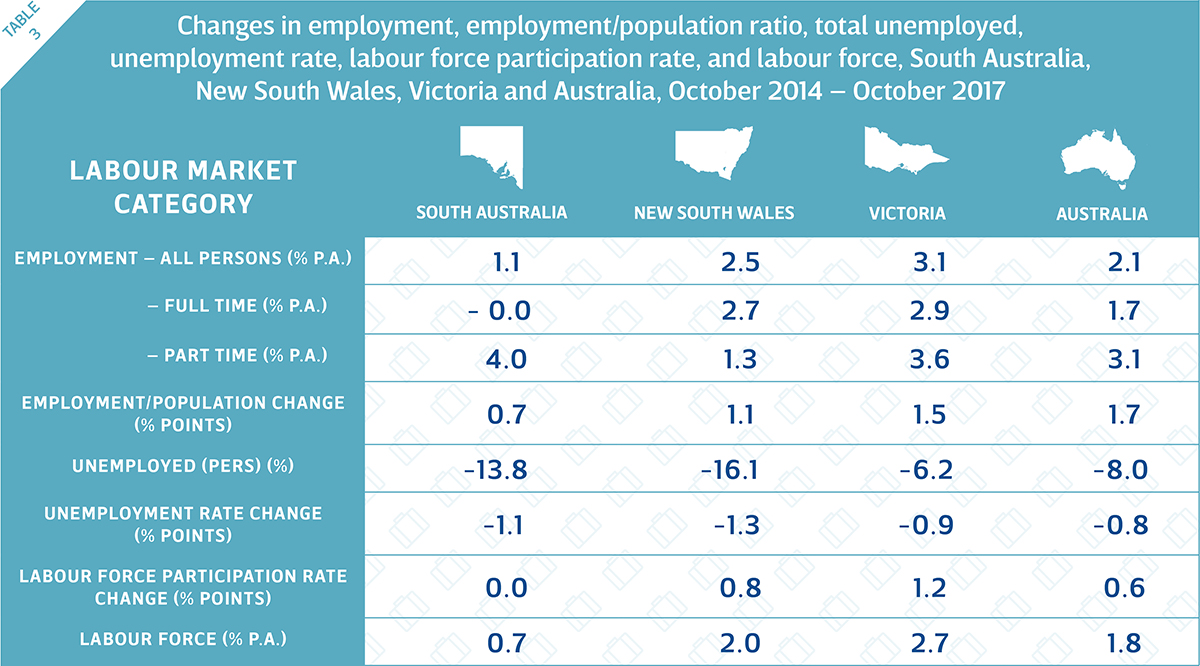 It is time for South Australians to demand a State Government that will set fast economic and employment growth parameters for the state that reward private sector initiative and investment without businesses kowtowing to the state.