Our wedding took place on a perfect sunny day in 2014 in New Zealand in front of around 50 close family and friends, and was confirmed with a marriage certificate issued by the New Zealand Government.

Ideally, the story would end here, with that fairy-tale phrase “and they all lived happily ever after”.

Now we and every other same-sex couple in Australia who wants to get married or have their overseas marriage recognised are being forced to ask the public for their approval.

If you think an unsolicited text message is an invasion of your privacy, imagine how intrusive it is to have your personal relationship subjected to public comment and a vote by the entire population.

Comedian Hannah Gadsby succinctly summed it up in a recent interview on the ABC’s 7.30:

“To make us subject to a majority vote means that we have to prove ourselves worthy, and that’s exhausting.

I was opposed to the idea of a plebiscite on same-sex marriage because I believe it’s the Government’s responsibility to change the Marriage Act and that a human rights issue shouldn’t be put to a public vote.

I also feared that if such a vote (or survey) occurred, the resulting campaigning would harm vulnerable LGBTI people, especially young people without a strong support network.

What I didn’t anticipate was the way in which the fracas would affect my own emotional state and wellbeing.

It’s been relentless and, yes, exhausting.

I feel frustrated every time a Coalition for Marriage commercial appears on prime-time TV, with lies and misleading claims that the postal survey is somehow related to school programs and parental rights.

I get distressed when I read social media comments from ‘No’ campaigners who refer to gay people using words such as “dyke”, “faggot” and “homo”; who liken loving someone of the same gender to loving a bridge, and who suggest homosexuality equals paedophilia.

I find myself looking around in public places – airport lounges, cafes, shopping malls – wondering how many of the people surrounding me agree with those sentiments.

I am confronted when I walk down the main street of a small regional town and encounter a large billboard shouting ‘No’, and fearful when I read that obscene homophobic graffiti has been scrawled on trains in Sydney and vandals have attacked Brisbane properties flying rainbow flags.

I am kept awake in the night, grappling with the fact that someone who thinks it’s okay to wear a Nazi outfit in a Facebook profile photo gets to have a say on my relationship status, and that organisations who claim to care about children ignore the harm their words can cause to young gay people (who are already at greater risk of committing suicide than their heterosexual peers) and the children of gay couples.

I am infuriated hearing privileged white middle-class conservatives complaining about being bullied for their views or having their freedom of expression curtailed, while LGBTI Australians are still being harassed, discriminated against and bashed on a daily basis.

I feel sick when I turn on the TV news and hear that someone wearing a ‘Yes’ sticker allegedly headbutted Tony Abbott, because I know it will be headline news across the country and used by the ‘No’ campaign to once again divert attention from the actual issue.

(The day after the Abbott incident, a transgender teenager was also assaulted in Hobart, but that barely caused a ripple in the media.)

Some would have you believe that many of those campaigning for marriage equality have a “gay agenda”; that they are rabid activists who want to destroy your family and rock the foundations of Australian society, force you to let your sons wear dresses to school, and make polygamy and gender-neutrality compulsory.

The truth is much less sinister.

They are a diverse and ordinary bunch, ranging from teenagers to grannies, fashion designers to farmers, religious ministers to government ministers.

All they are seeking is for same-sex couples to have the same right to marry as heterosexual couples.

All those other claims – about Safe Schools, families, freedom of speech, “rainbow Trojan horses”, etc – are red herrings.

The Coalition for Marriage has chosen not to campaign based on the actual question being asked in the postal survey because it knows polls have shown most Australians support same-sex marriage.

It has chosen to portray gay people as a threat, because it is aware that to acknowledge their shared humanity would encourage empathy and an expectation of equality. 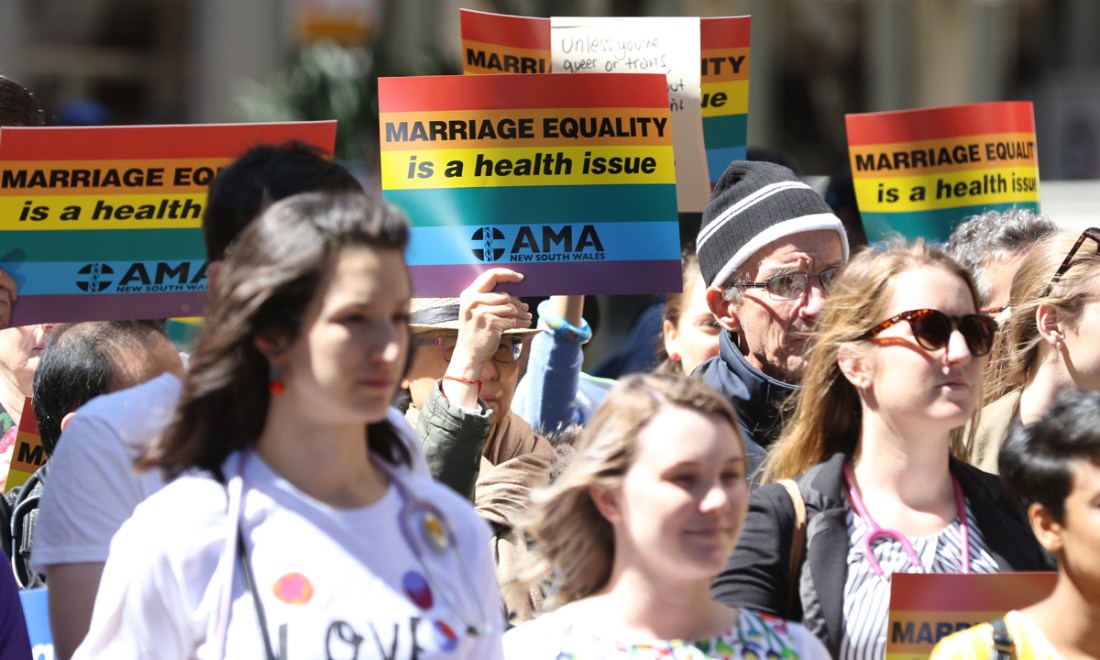 But it’s not okay to say ‘No’ – to deny someone the right to marry the person they love – simply because you got annoyed by a text message, you’re pissed off that some idiot allegedly headbutted Tony or you reckon a few Yes campaigners are being a bit too pushy.

It’s not okay to seek to deny someone else’s right to marry just because their sexuality makes you a bit uncomfortable (but if that is why you’re voting ‘No’, at least be honest).

And it’s not okay that LGBTI Australians are being made to feel marginalised and stigmatised.

Recognising same-sex marriage won’t affect anyone but same-sex people and those who love them.

However, this survey and the surrounding debate is having, and will continue to have, a lasting impact on LGBTI Australians, especially those who are young, isolated or vulnerable in other ways.

They need as much support as possible from those around them.

Personally, I’m going to try to follow the example of my wife, who has decided to take a temporary hiatus from social media after observing that, while she has little power to influence the postal survey result, she can take steps to limit the effect it has on her wellbeing.

Smart woman. That’s just one of the reasons I married her.