You’ve got to admire this State Government – they certainly know how to turn their glacier-paced decision-making processes into PR gold.

The Government has known since 2007 that the juicy development plum of the old RAH site – seven prime hectares – was going to need redevelopment.

After yesterday’s collapse of its deal with the favoured development consortium, we are back to square one.

After 10 years, the Government has almost nothing to show for its many and varied ideas for the land, apart from many years of “good news” stories, colourful images of the utopia it would become, vacuous yet somehow tortuous consultation processes, and countless “joint” statements and photo opportunities from the conga line of ministers who’ve got their PR mitts on the project.

The reality is the Government has been confused about how to manage the site from the beginning. Too many cooks.

It’s not surprising when you look at other city developments. The Government’s negotiations with the Walker Corporation over the redevelopment of the Festival Plaza took years to come to fruition after the developer was given exclusive rights to produce plans in 2012. Likewise, the Government must have bored SkyCity into submission during years of negotiations before it finalised a deal for the New Zealand company to redevelop the Adelaide Casino.

But while it displays Utopia-style decision-making skills, the Government is a world leader in producing glossy websites, fly-throughs, and media “product” (announcements), most of which come at a considerable cost to you and me – the taxpayer. 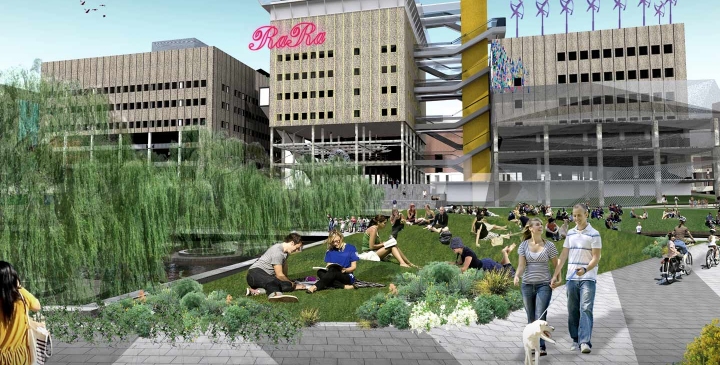 Back in 2013, the Government’s internal processes about how to manage the old RAH site’s future had become tangled in a blizzard of paper, competing agendas, and confusing meetings involving too many people with too many different ideas about how to proceed.

An embarrassing earlier thought bubble about returning most of the site to park lands or open space was ignored, along with another idea for a Federation Square-style square. The sensible thing might have been to let the Integrated Design Commissioner Tim Horton finish his work on a masterplan for the whole area, but his office was scrapped by Premier Jay Weatherill, probably because it was too closely identified with former leader Mike Rann.

In the face of such confusion, it came up with the cunning plan to run an “open ideas” competition, the cost of which included a $300,000 prize and much more in marketing and PR spend.

The Government then poured a pina colada, kicked off its loafers and basked in the glow of PR sunshine as the media ran countless images of competition entries for the site, from ludicrous multi-coloured renderings of futuristic neverlands to a giant artificial mountain. The Murdoch press, in partnership with the Government, facilitated a “people’s choice” vote.

Winners were announced with fanfare and, then, what came next was… well… absolutely nothing.

Last October – with the clock ticking on the old RAH as a hospital site – Adelaideans were stunned with more colour and movement. 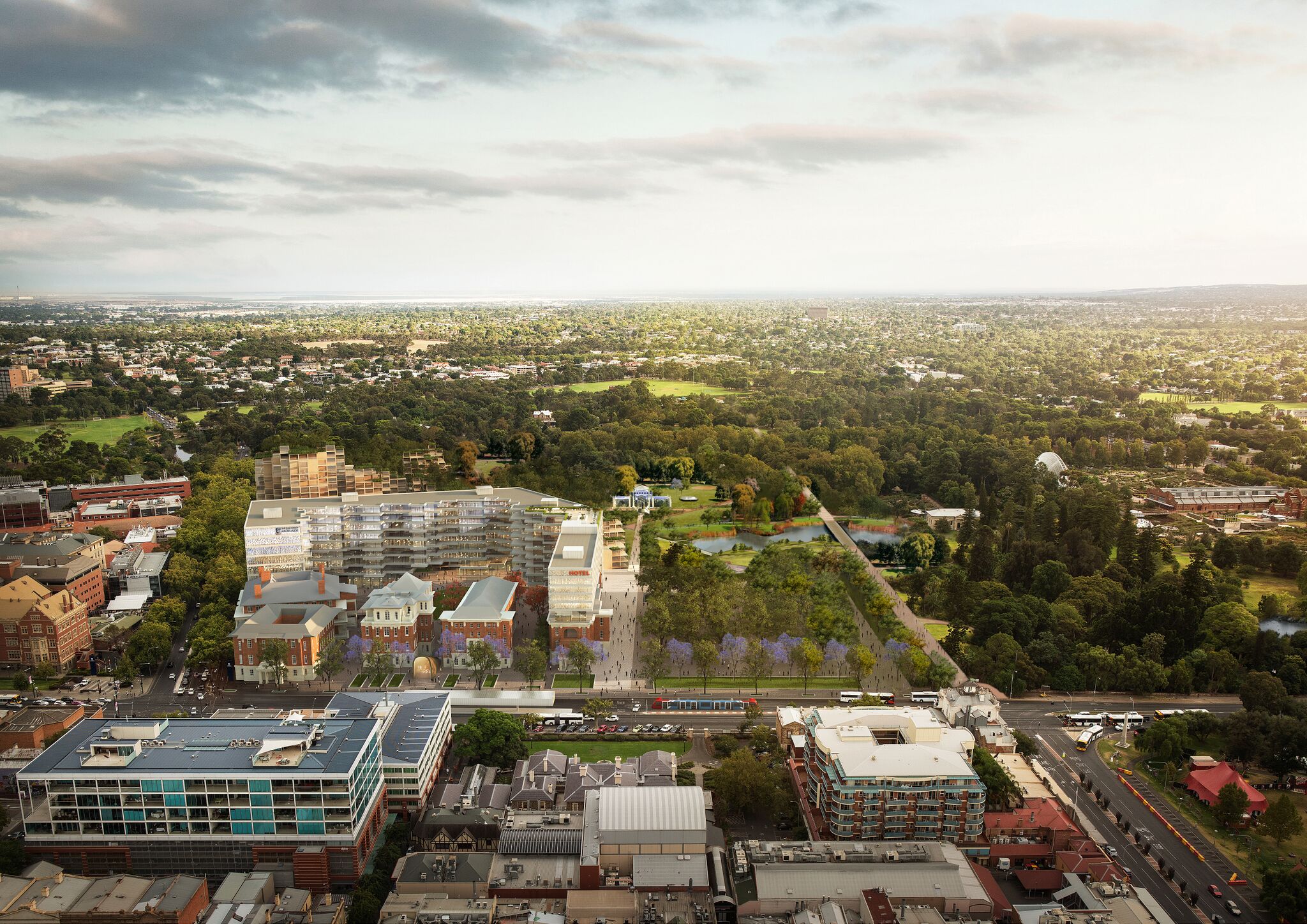 Concepts for the old RAH site released by the State Government in October 2016.

This time the announcement was a suspiciously round-numbered $1 billion redevelopment, to be overseen by a consortium of infrastructure giant John Holland and local developers, Commercial & General.

“We believe the proposal provided by the preferred proponent meets all of the expectations of the community and we look forward to revealing all of the details,” Weatherill said at the time.

Oh, the PR joy of it – not only a front-page with follow-up on the radio and TV, but also the prospect of more delicious “reveals” to come.

What came next was… well… absolutely nothing.

Somehow during the negotiating process the price from the developers turned out to be much less attractive than first thought, which raises serious questions about the evaluation process undertaken by the Government in the first place.

It also seems that the Government became reluctant to swing a deal with Commercial & General because it was cranky with the company for failing to follow through on an agreement to buy the Government’s State Administration Centre in Victoria Square. That deal fell through only weeks after the Government signed the company up to the old RAH negotiations, infuriating many in Cabinet. A cynic might assume that the writing was on the wall from that moment. Business in this town should know not to cross this Labor Government – payback is inevitable.

And now, the taxpayer will have to purchase the intellectual property from the developer, as well as face the real prospect of a multi-million-dollar compensation claim.

So what’s the plan now? It sounds remarkably similar to an idea floated by then Health Minister John Hill a decade ago – return a large portion of the site to the Botanic Gardens and open space, demolish the tired buildings, refurbish the heritage buildings. There won’t be any long-term residential, which sounds suspiciously similar to the Opposition’s policy announcement just a week or so ago. The Government will seek expressions of interest in a hotel, after – on the face of it – burning the international Marriott hotel group, which was part of the John Holland/Commercial & General bid.

A well-organised, prescient Government would have had these plans in place well ahead of this month’s closure, so that the city could benefit as soon as possible from a redevelopment. But just imagine the PR opportunities foregone if they had made a decision five years ago and stuck with it?

The only new idea has come from outside the Government’s inner huddle – the concept of a contemporary art gallery, championed by Art Gallery of SA director Nick Mitzevich (although his original favoured site was actually at the other end of town). That project will be subject to an international design competition, but the Government hasn’t given any commitment it will fund the building.

Overall, the redevelopment will be managed by the Government itself – an idea flagged early this month by Urban Development Minister Stephen Mullighan, the latest minister to oversee the Government’s spicy combo of spin and stasis on this project. As others have noted, Adelaide has became a “company town” where the State Government is the company.

For now, try to banish dull, grey thoughts about how this shemozzle might have damaged the state’s reputation as an investment destination. Give no heed to negative thoughts about wasted time, energy and money.

Rather, sit back, relax, and enjoy the colourful hoardings promising a bright new future that have been erected around the old RAH site.

Perhaps book yourself in for some rooftop “glamping” on the old RAH helipad (yes, that’s going to be a thing).

Catch the one-kilometre tram extension to the East End, to open in time for next year’s election – the only tram development to occur since the Government announced a rebuilt suburban tram network four years ago.

And, of course, prepare yourself for the next “joint” announcement of exciting new things coming to the old RAH site soon – with bonus fly-through.

The State Government might not be an exemplar of best practice in facilitating timely development, but it is a global leader in conjuring good news from torpor.