If the citizenship fiasco engulfing our federal Parliament is making the law an ass, it’s worthwhile finding the donkey that sired it.

This  “train wreck” was engineered by our politicians, one suspects, initially to provide bread and circuses, since political blood seems the only remaining commodity to have value in Canberra’s Colosseum.

The episode started as a sideshow that appealed to our traditional Aussie merriment at scything tall poppies, but it is increasingly infecting the body politic. Indeed, it is now threatening the fabric of the system, which the Constitution sought to protect.

I recently wrote in InDaily that I hoped the High Court would interpret the meaning of  “foreign power” in Section 44 as it was intended. Some readers made the point that the words of the law, since they have never been amended, must be read in their current context. While I consider that they have Shylock’s pedantry and motivations, I acknowledge that as a fair point.

Why do I then contend that the federal parliament is a donkey in this matter?

Donkeys are loud, raucous and undignified. In their frenzy to trample fallen colleagues, our pollies’ lack of empathy, hubris and overweening arrogance characterises their braying. When they find themselves similarly trapped, they ask for the understanding they did not extend to others. If they are so unfeeling and insensitive to the lives of people with whom they work, what does that say about their ability to govern us humanely?

Additionally, successive Parliaments have been aware that the Constitutional sections on qualifications and disqualifications posed potential difficulties.

If any good can come of Nick Xenophon’s predicament it is to highlight that this is about more than sloppy attention to detail. Nick is known for his work ethic, his pursuit of causes and for his integrity. He did what he felt was required. Is he the sort of member Australia can afford to lose on the technicality that he has an “entitlement” of which he was not aware? 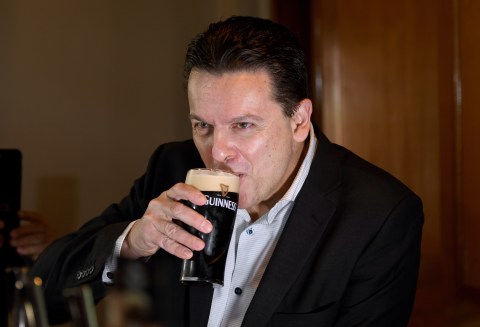 Nick Xenophon makes light of his citizenship debacle with a pint at The British Hotel in North Adelaide. Photo: Mark Brake / AAP

The government is pinning its hopes on the High Court. They hope that an MP might not be disallowed provided all “reasonable steps” had been taken to ensure compliance. However, a 1992 judgement argued that citizenship must be renounced through the law of the country granting it. Two of the respondents had become Australian citizens using an oath that renounced all foreign allegiances however, as they had failed to fulfil the legal requirements of their native lands, they not taken “reasonable steps.”

The court’s comments provide a clear indication that something needed to be done: nothing happened, despite the fact that this was their second public warning to the parliament.

In 1988 the Constitutional Commission reported. Its commissioners included Australia’s brightest and best legal and political brains: Whitlam, Hamer and Zines were among its members. They recommended change. They noted that the current provisions were “neither entirely clear nor altogether appropriate”.

At the subsequent referendum, no questions were put on that aspect. Neither did Parliament address those matters which were within its control.

Some of the Constitution can only be altered following a referendum. Section 44 falls into that category. However, the section dealing with “Qualifications“ (sec34) can be amended by Parliament. Despite Australian citizenship existing since 1948, the qualification remains “a subject of the Queen”. The inaction might be understood had Parliament not been prepared to radically amend powers related to this matter in other sections.

The founding fathers took foreign allegiance seriously. They provided draconian penalties: “ for every day on which he so sits,  (he) be liable to pay the sum of one hundred pounds ($200) to any person who sues for it in any court of competent jurisdiction.” (Sec 46). Until they were bankrupt, anybody could take them to court.

In more modern times, Parliament considers this matter so trifling that it’s now worth less than traffic fine. In 1975, they disallowed that section of the Constitution. They replaced it with penalties remaining at $200 per day, but no matter how long the person has sat, claims cannot be instituted that are more than 12 months old and they are effectively limited to $200.

Running away from this dilemma and handballing it to High Court is a symptom of a deeper-seated problem. We face a test of our system, our values, and our national identity.

If Barnaby Joyce is ruled ineligible, he will have been so for 71 days in this Parliament and many more in previous Parliaments. Should anyone choose to sue, they’d have to go to the High Court (the courts, which could hear the case, have been limited).  You’d be awarded $200 – maybe more if he continued sitting illegally AFTER you commenced your action. Nobody else can sue because Parliament has limited the number of actions that can be taken.

The lack of importance given to this issue is also reflected in the expectation that candidates must self-assess and declare their status. That’s a joke.

No ALP members have, so far, been caught up because the party uses professional expertise to assess candidates’ backgrounds. Outside the major political parties, potential candidates are not so well resourced.

Seven cases have come to light because of selective assessment. The calls of the Greens and Xenophon for an audit of all members make sense.

We know that Bill Shorten and Tony Abbott fall into the same category as Xenophon and Joyce. While both may have dealt with their situation appropriately, personal assurances should not be accepted. Caesar’s wife not only had to be pure, she had to be seen to be pure. The Electoral Commission should be mandated to check eligibility before accepting future candidates. After all, that’s their job.

The Parliament has exercised neither dignity nor authority in this matter. On legal advice a number of Senators resigned. Others, on different legal advice, have stayed. Their cases have not been tested in law.

Parliament is “Sovereign”. While the Constitution circumscribes it, the only law that applies are the rules, which it chooses to make for itself.

Politics has become a blood sport and everyone is to blame. Photo: AAP/Lukas Coch

We, too, must shoulder some responsibility. The media prey upon our baser instincts; politicians feel obliged to pander to us. Every group has been willing to feed the fires that have seen political debate degenerate into a polarised blood sport, where cheap point scoring and 24 hour solutions trump long-term interest and good governance.

“Statesmanship” used to be an ideal to which diligent politicians aspired. It was learned with mixed experience. Facebook and Twitter are unforgiving, critically judging even imaginary transgressions. We lap it up then criticize our pollies for being indecisive and timorous. We cannot have it both ways.

Running away from this dilemma and handballing it to High Court is a symptom of a deeper-seated problem. We face a test of our system, our values, and our national identity.

The Constitution disqualifies certain people. It is the responsibility of the Electoral Commission to ensure that those who don’t quality, can’t be elected. Parliament must mandate that.

The High Court may assist some or all of those before them. They will provide clarity for the future within the Constitution’s current wording. That’s not enough.

Informed by the High Court, the Parliament should, as Whitlam suggested, consider the provisions relating MP’s suitability in light of the realities of the world of today, not yesterday.

An amendment to the Constitution should be put at a referendum. The collective ability of Australians to exercise commonsense has never been in doubt.

The Inquisition and McCarthyism demonstrate the havoc a runaway train can cause. In handling this matter, every elected representative stands before Australia’s highest court – the people. If our MPs are found wanting, they should be sentenced accordingly.

Mark Brindal was a Member of the SA Parliament from 1989 to 2006, and a Minister during the Olsen and Kerin governments. He is now involved in academic writing and is a public policy consultant.