We used cartoons collected during the last days of the Paul Keating supremacy to chronicle how the wheels fell off during the 1996 election campaign and that serial failure John Howard (once written off in a Bulletin headline as “Mr Eighteen Percent. Why does this man bother?”) won in a landslide.

Howard found that the times did indeed now suit him, and he swept aside Keating’s “Big Picture” as Peter Nicholson so poignantly captured while asking what might be its replacement.

After a slow start, PM Howard captured the nation’s mood for a decade, and the cartoonists chronicled it all with their customary wit and insight. His demise was multifaceted but Herald Sun cartoonist Mark Knight’s memorable cartoon reminds us of Melbourne Cup day early on in campaign 2007, when he depicted the once invincible PM reduced to a poo sweeper, courtesy of the Reserve Bank’s decision to raise interest rates. 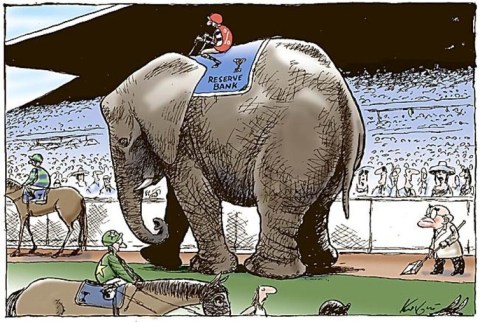 Mark Knight’s 2007 cartoon (with Howard on the right).

Back in the 1990s, writing about cartoons involved a budget for buying newspapers, scissors, and a good spatial memory. It also involved proud and liberal use of the phrase “our great black-and-white art tradition”. Metropolitan and national newspapers were big, prosperous things, only just beginning to come to terms with colour.

The house cartoonists (there were often several) were central to their paper’s ethos, often “the most read thing in the paper”. We never had any real empirical evidence for “the most read” assertion, but we made it often and no one ever demurred. Political cartoons were at the centre of a clearly defined media landscape.

When Howard defeated Keating, television set the daily political agenda, but the longer threads of debate were dominated by newspapers, especially the opinion-rich broadsheets.

One of Howard’s most effective innovations was to use talkback radio to avoid the filter of “elite” hostility he perceived as dominating newspapers and the ABC, but the internet was a fringe space, not yet more significant than community radio. The opinion pages of newspapers were the dominant forum for serious political discussion, and at their heart was the visual terrorism of cartoons and illustrations – attracting eyes, conflating issues, and distilling images of politicians and their policies.

Every day they provided comic commentary on the politicians we elect to rule us, and often they managed darker and more serious satire. The engagement was robust and sustained – for example, Bill Leak’s response to the GST policy that Howard took to the 1998 election was to draw him with 10% more lip, and that is largely how many remember him. Great comic artists spoke in sometimes savage shorthand to the major issues of the day, in the major crucible where those issues were thrashed out. They were uniformly powerful and humane in their response to the Howard Government’s asylum seeker policies, for example.

For the 2016 campaign, painful in so many ways, was also the last hurrah for four great cartoonists of our era. Bruce Petty, John Spooner and Peter Nicholson retired from regular cartooning and earlier this year, Bill Leak died suddenly. We write, therefore, in long-term appreciation of the wit they have brought to our public life. We also must comment on how radically the media landscape has changed around them.

Retirements and even death are in the natural order of things, and all these men leave substantial bodies of work. What makes their departures epochal is the fact that none has been fully replaced at their newspapers. They certainly haven’t been replaced by the group of female cartoonists whose eventual appearance we used to predict when asked “what about the women?”

It’s a good question but we, like cartoonist Fiona Katauskas, have no clear answer except to say, it’s a blokey world on the editorial floor . Katauskas puzzles over the matter in her New Matilda article A woman walks into a bar and in recent correspondence observed:

Another theory I have is that it’s the comedy thing. It’s not the politics thing- women are very well represented in political journalism. Comedy of all kinds- whether it be writing, performing or standup- is a different matter. These professions are also largely male-dominated and the myth that women aren’t funny helps to exclude them or discourage them from trying to break in. 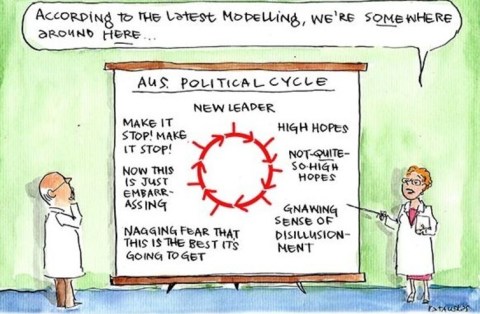 The last cartoons of the four greats at their long-term papers are a varied bunch. The two Age cartoonists left with reflective works during the phoney electoral war that marked the early months of 2016.

Petty shuffles off to the old cartoonists’ home with an evocation of the prime ministers back to Menzies that he had drawn, and a celebration of that scarcely balanced spaceship, democracy. Or is it, instead, a money-dominated plutocracy with the politicians owned by cigar-chomping money-men? With Petty things are always more complicated, never resolved. Since he first drew for Murdoch’s Daily Mirror in 1962, Petty has sustained a powerful and precise critical eye on our travails as a nation, ever sharp and avuncular. 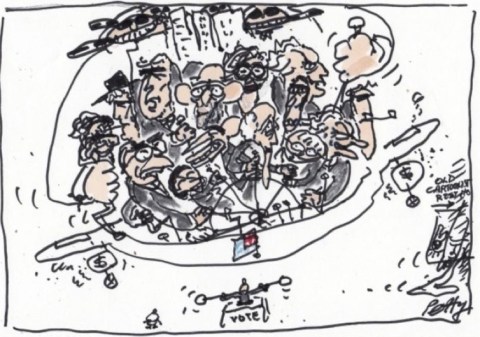 Spooner is, by contrast, blunter. He strands a menagerie of his bêtes noires – Turnbull, Shorten, Trump, trickle-down economics, climate alarmism, etc – on the island. He draws himself walking way in disgust, immodestly on top of the water. And the words remind us that cartoons tell truth to power in ways power would rather not hear. 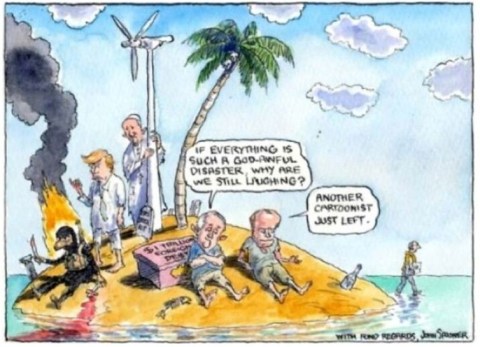 The two cartoonists at the Australian left in full flight. Peter Nicholson really has been the pre-eminent cartoon commentator on current events, perhaps with Geoff Pryor of the Canberra Times and now the Saturday Paper. He bowed out unobtrusively with this pre-publicity for a black-tie boxing night at Melbourne’s exclusive Australian Club. However, if you read his cartoons over time, you are wittily apprised of what has been going on, and get a brilliant first draft of history.

It’s easy to do at Nicholson’s immaculate archive of his work. Bill Leak was always much more the wild man than Nicholson, and his last cartoon would have caused a controversy had he lived long enough for the predictable outrage to build. 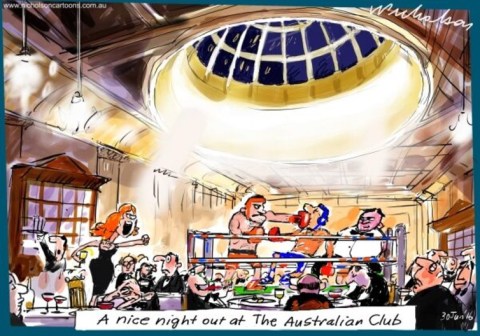 He was always after the harsh, prophetic laughter of satire, that moment of shock when you are made to see something you’d rather ignore. Here he presents the NSW Education Minister as cheerfully beheaded in a controversy over Islamicist radicalism at a Sydney High School. It is elegantly drawn and ruthless. 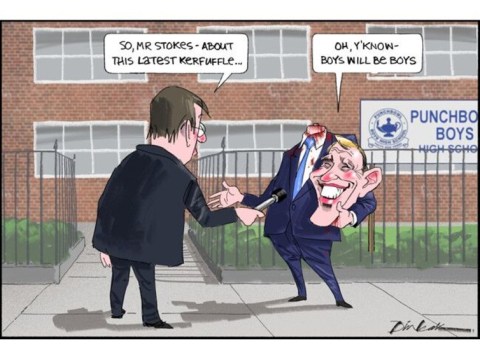 Much banality and pompous self-congratulation has been written about the “larrikin tradition” in Australia. Leak was the real thing, however, a much tougher thing than Paul Hogan throwing another shrimp on the barbie.

David Rowe’s contributions for the Australian Financial Review’s readership often enough reflect the cut through nature of the cartoon when set alongside the verbiage of so much political commentary. Here we find a wonderful evocation of Edvard Munch’s 1893 painting The Scream as a parody on our experience as citizen voters confronting the long campaign Prime Minister Turnbull figured would be good for him, and good for us. 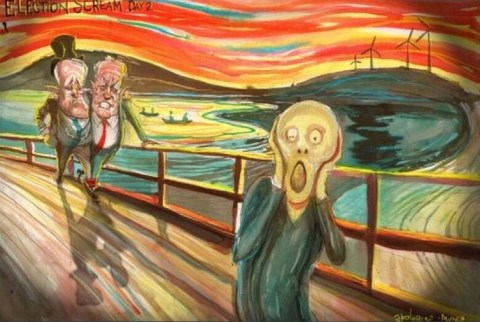 The more recent arrivals – David Pope, Jon Kudelka, Matt Golding, First Dog on the Moon and the like – are all fine and deserving artists in their own rights, but professional political cartooning is as blokey an activity as it ever was. 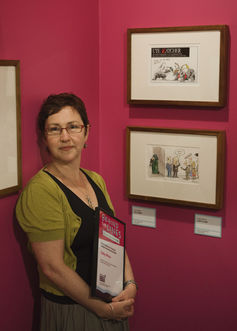 Cathy Wilcox pictured in 2009 when named the year’s best cartoonist at the Behind the Lines exhibition in Canberra. Lannon Harley, AAP/National Museum of Australia

The younger men are entering a tougher world. Cartoons are still being published, but there is more syndication and (we hear) piecework, so the number of artists with regular jobs is shrinking. It is a clear index of the fact that Australian newspapers are not what they were at the turn of the century, let alone what they were when the departed cartoonists joined them in the 1960s and 70s.

The Fairfax newspapers, the Sydney Morning Herald and the Melbourne Age, are no longer the essential forums for debate and investigative journalism. For the editorial cartoon in Australia and beyond, this is a problem. As a mode of critical and satirical art, it is particularly well-acclimatised to the printed newspaper, in a way that has not translated well online.

The cartoonists that held sway on newsprint opinion pages lack power and impact several clicks behind the first screen in the increasingly dominant web editions. They lack power because they lack the simultaneous visual context a reader gets in scanning a printed newspaper. While it would be ridiculous to assert that visual satire is disappearing in the digital age, one of the great satirical achievements of the mass media era especially in Australia, the editorial cartoon, is losing its centrality.

This is not a consequence of any waning of satirical power in the cartoons themselves. We are confident that we have demonstrated this strength again in the cartoon chronicle we’ve authored looking at the 2016 campaign. But it is a significant consequence of changing formal and economic models in media, changes that scarcely existed in embryo when we started looking at cartoons.

Two decades ago, we could validly treat the cartoons as an index of comic and satirical commentary on the campaign. Television and radio satire existed in some places, but were hard to capture and impossible to reproduce in our academic work; the cartoons told quite enough of the story and were seen by close enough to “everyone” to be representative of a dissenting view of the carnival of hypocrisy that parades during election campaigns.

The cartoons tell just as good and memorable a story now, but have become a niche in a multi-faceted media landscape rather than the public thing (res publica) they once were. Internet memes, Twitter, mash-ups, Facebook feeds, and a range of other social media make it impossible for students of political satire and comedy to consolidate a corpus for analysis. As a consequence, newspaper cartoons are no longer major components of the central forum that they were in the era of mass media.

As cartoon scholars, we experience this change as loss, though the spirit of caricature and satirical commentary is clearly healthy elsewhere in the media and finding modes of expression for the future. One major trend is the move to longer form caricature, either through animations and collages, or through strip cartooning like that of First Dog on the Moon in the Guardian.

The regular gigs still tend to focus on stationary images, however. Animations as political satire are proving a hard model to crack, as no-one seems willing to foot the bill to sustain high-quality, animated daily satire. Meanwhile, editorial cartoons inhabit an increasingly marginal place in an increasingly fragmented and fractious media landscape.

But their capacity to tell truth to power, demonstrate that the kings and queens of political life have no clothes, and to entertain the public remains undiminished. While this particular mode of satirical representation may be in retreat before the forces of digital media, graphic satire is not going to die while it has such fit meat to feed on.