When American Pie-neer Don McLean sang of “bad news on the doorstep”, he couldn’t take one more step.

By contrast, when the Weatherill Government encounters a problem, it serves as the catalyst for frenetic propulsion.

Indeed, a good deal of Labor’s political capital over its long shelf-life has been raised not by delivering good things but by ameliorating bad things.

There is a broad – and understandable – perception that emerging crises are generally an undesirable thing for governments of all tiers and colours.

But the truth is, and increasingly so in the modern age of information overload, problems are the making of a government.

There is, in fact, little to no political capital to be gained from merely providing dourly effective administration.

And there will always be intractable problems that no government is capable of solving – or at least, not without doling out some unpleasant medicine to the constituents from whom it will be seeking re-election before too long.

So when hot-button, soluble problems present themselves, it’s no bad thing. Because it provides a government not only with something to do… but with something they can be seen to do.

And for the Weatherill Government, that was becoming an imperative.

Labor had, until late, been slouching towards the end of four largely wasted years.

The term began (belatedly, after a pair of by-elections confirmed Labor as the party of majority rule) with what Jay Weatherill hoped would be a blaze of glory – a Governor’s speech laying out a self-described “bold” policy agenda.

But by the end of the term, the main tenets of this “new agenda for South Australia” have already been consigned to history.

Weatherill succinctly summarised his major points thus: there would be a Royal Commission into the nuclear fuel cycle, the Government would pursue a new taxation system, patient care would be put at the forefront of a broad-scale health revamp while education would flourish under a review of the public schools system, and the Government would lead a debate on shifting the state’s time zone.

We know the results: the first and the last of these pursuits have already come and gone with nothing to show but a bill.

The much-hyped systemic tax reform was little more than a tinker, while SA continued to lag the national average at every level in the latest NAPLAN survey. As for Transforming Health, the Government doggedly stuck to its guns – a rare case of constancy for which, ironically, it received no political advantage – until at the death it blinked and went on a system-wide spending spree that appeared entirely at odds with its brief of balancing sustainable healthcare with fiscal discipline.

And in the midst of all this policy failure, came the ultimate symbol of SA’s malaise: last September’s statewide blackout.

It was, predictably, portrayed as a body-blow for a Government that was scratching around for new ideas.

But, in fact, it provided exactly the new idea that this policy-bereft administration was looking for.

Not that it should have come to that, of course.

It was well-known from before Labor seized office that energy security and cost was awry in SA. This much was even acknowledged on the infamous ‘Pledge Card’ Mike Rann handed out in 2002, when he promised: “We will fix our electricity system and an interconnector to NSW will be built to bring in cheaper power.”

That pledge fell over in 2004, and electricity was never again a major feature in pre-election debate. Certainly not in 2006, when water security had overtaken it in public discourse, another unforeseeable problem that could have been foreseen that the Government could then be seen to be doing something about.

That was the election predicated on one simple motto: “Rann Gets Results”. Apart from the one about fixing the electricity system and bringing in cheaper power, of course.

By 2010, the debate had shifted to a new hospital and rebuilt Adelaide Oval, a narrative that Weatherill managed to ride out again four years later in 2014.

And then, three years on, energy security once again presented itself, unambiguously, as the key issue on SA’s agenda.

And far from Labor’s death knell, it could yet be its salvation.

If Rann had managed to deliver on his 2002 promise, we may not be having this conversation today, as it’s conceivable last year’s political turning-point would never have been reached.

The irony is, of course, governments are never credited for things going right – largely because the electorate remains blissfully unaware of just how badly wrong things could have gone. 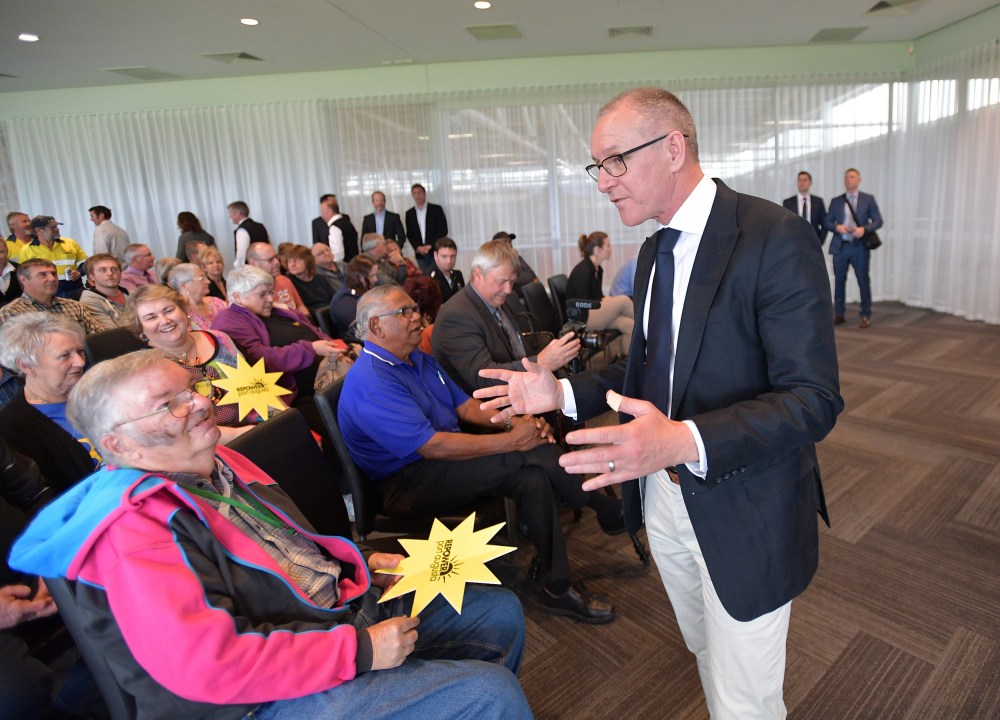 This much is true in a broad array of public policy areas: no-one lauds incumbents for the uncontroversial day-to-day management of agencies like Child Protection; rather, they rightly criticise when scandals are brought to light.

And successive (failed) inquiries and reviews are the Government’s way of showing that they’re dealing with the problems that arise.

Likewise, the fundamental problems that have arisen in energy security have given the Weatherill Government a platform on which to build a pre-election pitch.

All of a sudden, it is painting itself as progressive, proactive, world-leading and driven: all for attempting to solve a problem that has existed throughout its entire tenure without boiling over into a major political crisis.

Labor’s marketing throughout the forthcoming campaign will be replete with images of Elon Musk and sweeping statements about solar thermal salvation: none of this would have happened in this way had the state not plunged into darkness.

So, yes, problems are no bad thing in politics – as long as you manage to solve them.

The Weatherill Government, having failed to consolidate Labor’s fourth-term agenda, was only too eager to exploit the nexus between crisis and opportunity.

And Weatherill, avowedly “not a free market guy”, was happy to describe the deal to contract SolarReserve for all the Government’s power needs as one that would both “boost market competition and put downward pressure on power prices”.

He’d better hope these prescient words from a 2005 parliamentary debate don’t come back to haunt him: “Of course… the whole idea of competition in the electricity market is nonsense.”

“It is a triumph of ideology over commonsense – the delivery of electricity is a natural monopoly. The idea that you can have some competitive market for electricity that does not turn into a great rort for those people who are players in the game is nonsense.”

That observation was made by an outspoken backbencher named John Rau, now Weatherill’s deputy premier, in the midst of debate on an Opposition motion criticising Labor’s management of the energy market.

Twelve years on, and the fruits of that management have now given Labor what it craved the most: a problem to solve, an ideological wedge to exploit and the opportunity to double down on its existing green energy dogma.

Evidently for Labor, bad news on the doorstep is no bad thing.

Unless voters prefer the Sex Pistols to Don McLean, and send a very different message to the Weatherill Government next year: “You got a problem – the problem is you.”