This time last year, after announcing the launch of the Ramsay Art Prize, I wrote a column that argued for the art prize as a means of engaging artists, audiences, collectors and philanthropists alike.

One year on and the inaugural winner of the Ramsay Art Prize, supported in perpetuity by the James & Diana Ramsay Foundation, has just been announced.

Perth-born, Sydney-based artist Sarah Contos has been awarded $100,000 and her winning work will enter the gallery’s collection.

For Contos, this is a career, perhaps life-defining, moment. As she says:

“Obviously, I can use materials that I’ve always wanted to use, or I can take more risks. Sometimes when you’re a little bit poor, it’s harder to take risks, because mistakes cost.

“This will definitely enable more risky stuff. And travel – it’s really hard to travel when you’ve got no money, to just go and have a look at beautiful work… It just offers possibilities and I think that’s incredible.”

What is a career-defining win for Contos is, for the James & Diana Ramsay Foundation, so much more. The prize will impact on many lives – the lives of its winners, its finalists (21 in the case of the inaugural 2017 prize), its audiences and its benefactors.

In what is an increasingly competitive environment for government resources, philanthropy has never been more important. In fact, all the gallery’s new programs are being driven by dynamic and active philanthropists.

In addition to the James & Diana Ramsay Foundation’s support of this new art prize, we have a partnership with The Balnaves Foundation, which also invests in the next generation, and therefore the future.

Established in 2006 by Neil Balnaves AO, The Balnaves Foundation supports philanthropic causes in education, medicine and the arts. Since inception, it has provided more than $20 million.

The foundation’s relationship with the gallery began in 2009, enabling a new program for those aged three to 12 called START. In 2016, the partnership was restructured to enable the presentation of a new program for 13 to 17-year-olds. Called NEO, the year-round series of events bring teenagers into the gallery to engage with art in a social setting enlivened with live music, film screenings, food and beverages, art-making activities, conversations with artists and much more.

In late March this year, more than 660 teenagers attended the NEO Teen Takeover, an event that launched national youth week and involved more than 20 local arts and youth-led organisations.

Passionate philanthropists Andrew and Nicola Forrest’s recently publicised philanthropic announcement – made at Parliament House in Canberra alongside the Prime Minister and Opposition Leader – is one of the biggest in the country to date (a $400 million contribution to support culture, the arts, the environment and small organisations that positively impact on the lives of under-privileged communities). There is much hope that this announcement will encourage others to be as generous and instill a greater and broader culture of giving nationally.

Meaning to “do well”, the word benefactor only hints at the riches that benefaction brings. James and Diana Ramsay shared a lifelong passion for the arts. As the state’s leading cultural philanthropists, they have helped to build careers and collections. They have helped artists and audiences to “do well”. 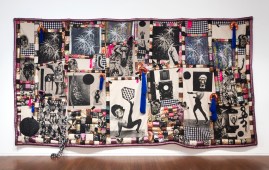 Helping others to “do well” comes in many shapes and forms. Last month we celebrated National Volunteers’ Week in acknowledgement of the work of more than six million Australians who “do well” for others.

More than 300 people volunteer at the Art Gallery of South Australia. Without them, we could not meet our charter to serve the South Australian and wider communities by providing access to original works of art of the highest quality.

In the words of the philanthropic Forrests, “We all have something to give” – an ethos with which Diana Ramsay whole-heartedly agrees.