Why ageing is the real elephant in the room

The latest Budget was greeted some with relief by older South Australians. After all, there were no moves to cut pensions and no major superannuation changes this time.

And yet, a very large problem has once again been left in the “too hard” basket.

Ultimately, the issue is whether we can establish a workable system that can support the aged, while managing the rest of the economy.

How we manage our public spending, taxation system, health services and labour market will be the real test of government in years to come.

According to figures from the Australian Institute of Health and Welfare, around one third of Australians are now aged over 50, around 77 per cent of those aged over 65 years are on the pension in some form, while only 76 per cent of seniors now own their homes outright (down from previous years).

While we’ve been concentrating on balancing the budget, the real issue at hand is how we will handle our demographic Armageddon over the next 10 years. 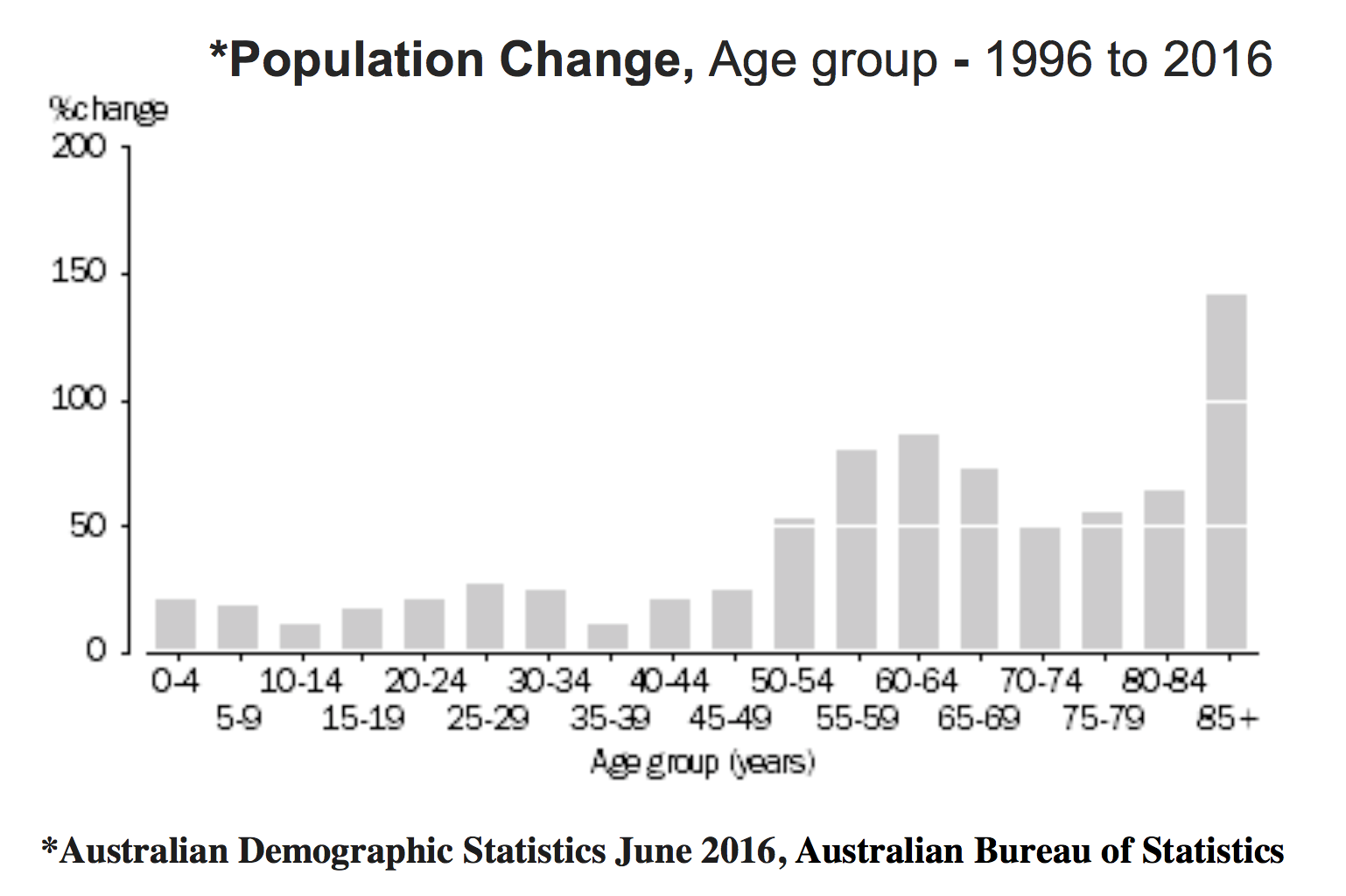 The Budget didn’t have the answers

A succession of governments seems unable to find the courage to undertake the kind of major tax reform that is needed, preferring to tinker around the edges with little real impact.

The announcement of a policy to “free up housing supply” by encouraging seniors to sell their homes and put an extra contribution of $300,000 ($600,000 for a couple) into super is one example of this.

Research shows most older Australians don’t want to move from their homes or neighbourhoods, and selling the benefits of extra superannuation is unlikely to change this – they’d prefer to age in the comfort of their own living rooms.

Even when they do move, it’s often to a retirement village. The cost of buying into this kind of facility is not cheap. Unless you live in the wealthiest suburbs of Adelaide, there’s unlikely to be much change from the sale of an average house. And this policy does nothing to encourage downsizing if you are on the aged pension.

While it’s good to see the government trying to assist our ageing population, we need to put serious thought into what might be effective.

Finding a way to help those who are getting older while holding onto the purse strings isn’t easy.

The first issue is the fact that we can access our super earlier than we can access the aged pension. It may be tempting for some to take to the caravan for a trip around Australia, spending the savings before returning home a few years later to live partly off the pension. This situation can’t continue. Changes to the rules around lump sum super withdrawals or maximum pension amounts will no doubt be raised in future Budgets.

Then there’s pressure to increase the compulsory super contribution rate. But this is risky given high levels may be unsustainable for employers, particularly in this low growth environment.

The other issue is how we help older people stay in the workforce longer and help them build wealth to fund at least some of their own retirement.

Surely people aged over 50 should be encouraged to contribute more to superannuation once they free themselves from the expenses of bringing up children and paying the mortgage. Yet from July this year the concessional threshold will be capped at $25,000 per year, irrespective of age.

We should also examine what kinds of benefits we can provide to those aged over 55 who are suddenly made redundant.

It’s extremely hard to regain full-time employment after a certain age. In addition, there are no additional concessions in the tax treatment of genuine redundancy payouts for older workers and generally no facility to roll any of those funds into much needed superannuation.

The situation is particularly bad for older women. If they are still lucky enough to be employed at 60 plus, their superannuation balance is likely much lower than the average man’s due to time taken out to care for children and the pay gap they face throughout their working lives. Earlier this year the Senate inquiry into women’s economic security in retirement found one in three women retired with no savings in old age.

With tax concessions still favouring those who have money to plan for retirement, more needs to be done to rebalance superannuation incentives for those on low and middle incomes to help them in retirement.

The decisions facing policy-makers on both sides of politics now are not easy. But they are decisions likely to affect our lifestyles, and those of our children.

While avoiding the issues might be easier for politicians in the short term, ultimately our debts keep piling up and our working population is shrinking. Although the popular choice has always been to raise taxes for those that can afford to pay, this won’t be sustainable in the longer term.

We need to find ways to help people save more for their golden years and to build an agile and cost-effective health system that can service the needs of future generations.