Emmanuel Macron’s decisive victory – 65 per cent to 35 per cent – over Marine Le Pen has calmed fears of a Eurozone crisis and boosted the hopes of centrists and of business in Europe that the momentum for populist parties has been stalled, at least for now.

German Chancellor Angela Merkel’s spokesman was quick to describe Macron’s win as a “victory for a strong, united Europe”.

With Theresa May’s victory in the UK election in June now seemingly assured, attention will soon turn to Germany where Merkel’s Christian Democrats will face a serious challenge from the Social Democrats in late September, and to Italy where the populist Five Star Movement is currently leading the polls ahead of elections due between October and February 2018.

One of Macron’s first visitors to the Elysee Palace after his inauguration parade in mid May is likely to be former Italian Prime Minister Matteo Renzi. Their high-profile meeting will be designed to seal a winning image of young, dynamic moderate leaders of a rejuvenated Europe rather than one that is falling apart. They will be critical of the Brussels bureaucracy and ECB constraints but will fight for both EU reform and its survival.

Echoing both Tony Blair and Justin Trudeau, the two self styled “Radical Centrists” will try to forge a way forward to outflank populists to their left and right. This will not be easy and their rhetoric must be matched by policies capable of producing real results, particularly for both countries’ flagging economies.

For the first time in France neither major party, the Republicans or the Socialists, won enough votes to be listed on the second-round Presidential ballot paper, such is the disenchantment with the political establishment. However, Macron and his “En Marche!” movement do not yet have any members in the 577 seat National Assembly and have no experienced party machinery embedded nationwide. This could pose real problems for the new President in June’s parliamentary elections and in the choosing of his Prime Minister.

The inevitable and necessary horse trading that is likely to follow could well take the shine off Macron’s and the Centrists’ momentum and reinforce fears of “politics as usual” to a cynical electorate.

Meanwhile in Italy, Renzi has just been re-elected leader of Partito Democratico (PD) – the centre left party that is the dominant grouping in Italy’s coalition government. Renzi resigned as Prime Minister last December following the defeat of his referendum on constitutional reform.

At the time, he vowed to leave elected politics forever although few commentators or colleagues believed his pledge would stick. It certainly didn’t last long.

Summer is coming and for Italians that means migration will again become a key issue: 181,000 migrants arrived in Italy in 2016, and more are expected this year.

In February Renzi resigned as PD Party Secretary but immediately announced he would seek re-election and a new mandate as party leader and, if successful, would again be a candidate for the Prime Ministership.

In the PD primaries Renzi was overwhelmingly re-elected. It was a significant victory for several reasons:

The geography of the party vote demonstrated Renzi’s strength in the centre but also in the south and in the northern region of Veneto, areas of Italy which voted massively against the referendum last December.

While the PD vote assures Renzi’s comeback into national politics leading up to the elections, he remains a polarising rather than uniting figure with the broader electorate.

He damaged his chances of securing a majority in last year’s referendum by promising to quit if it failed. The referendum quickly became a vote of confidence on him, a gift for populists on the right and left.

Now Renzi has assured party loyalists that after his primary win, PD will return to first place in the polls by the end of May, replacing the surging Five Star Movement which has been narrowly leading in opinion polls for some month, terrifying business. 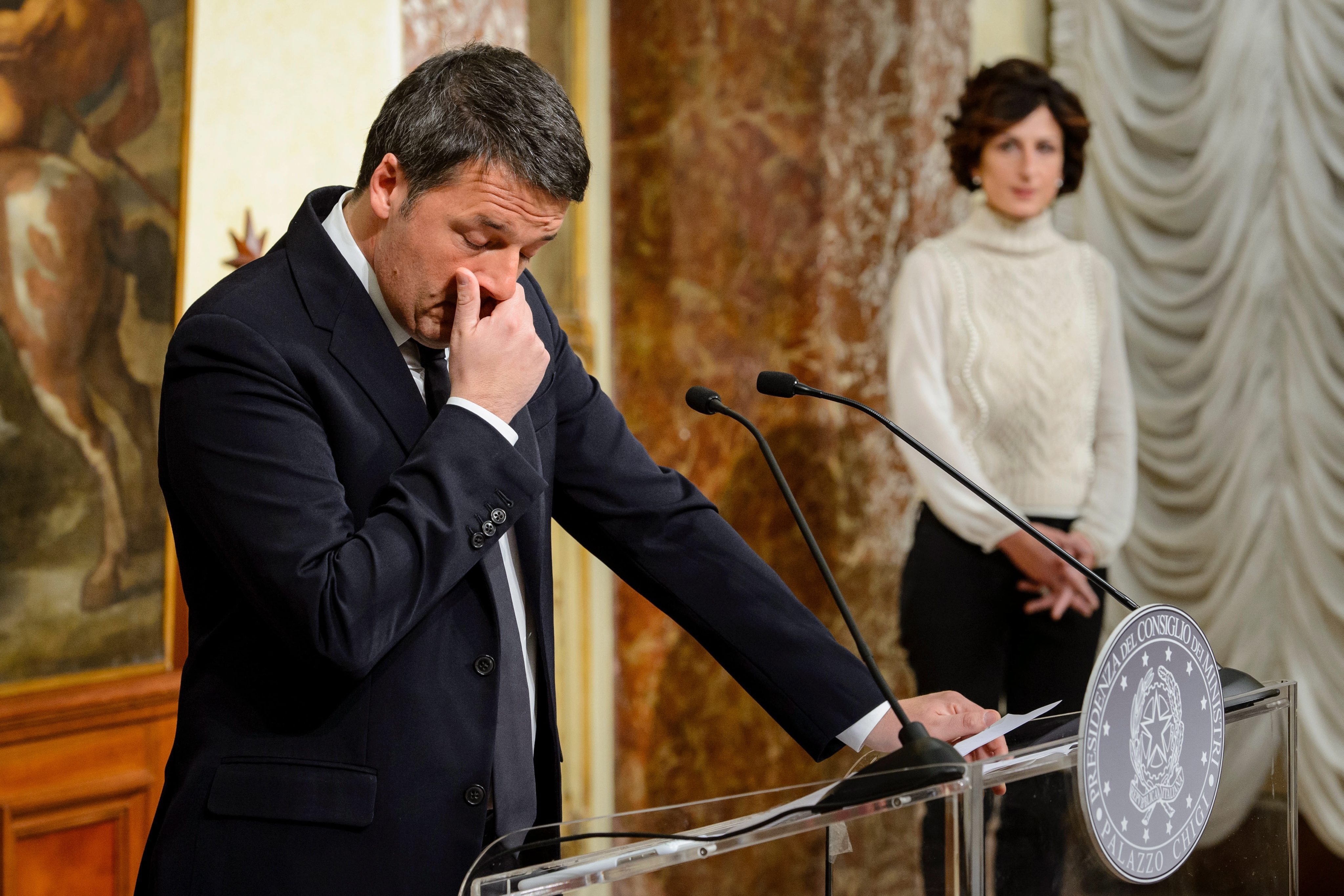 Matteo Renzi speaks at the Palazzo Chigi in Rome, after the referendum on constitutional reform, with his wife Agnese Landini in the background. Photo: EPA/Gregor Fischer

So what is likely to happen during the next few months?

Last year Italian politics was dominated by the referendum campaign. Since then Renzi’s comeback bid has consumed PD and media commentary. Soon the build-up to the election will take over, once again side-lining much needed reforms. However, in the immediate future, the main topic of contention will be proposed changes to Italy’s complex electoral laws which will require prolonged and, no doubt, bitter negotiations with other parties.

Despite this, Renzi will continue to push for the earliest possible election, which will be resisted by not only the President but also by many of the ministers in the government he previously led. This will weaken and destabilise the government now led by his mentor Paolo Gentiloni. Gentiloni will remain as PM until the election while Renzi barnstorms the country as party leader. Southern Italy will become a campaign and policy focus given that there Five Star is currently attracting 40 per cent of the vote.

Internationally, there will be complications for the government given that Renzi is keen to regain a high profile in international as well as domestic politics. Renzi and Gentiloni are, however, likely to coordinate their foreign policy positions, except in statements about the EU where Renzi will take a harder and more critical line. Domestically every crisis, such as the current financial black hole faced by Alitalia, will be used by Renzi to push for elections.

To compete with the Five Star movement, Renzi will at times attack the government his own party leads to distance himself from unpopular decisions and from coalition partners, including leftists who recently quit PD faced with the prospect of Renzi’s return. In doing so, he will have to walk a tightrope of looking like a populist opposition leader one day and a prime minister the next. For instance, he is likely to challenge the government with alternative proposals on fiscal policy and on other economic issues. By doing so, PD insiders say he will hope to cause a parliamentary rupture in order to trigger an election. His preference will be to engineer an incident caused by the left or by centre right groupings in the coalition. Renzi will want others, not PD, to be blamed for the coalition break up.

Ironically, Forza Italia’s Silvio Berlusconi, now 80 years old and sidelined by serious health and protracted legal problems, could also be heading for a comeback. The European Court of Human Rights last week announced it will examine Berlusconi’s case. A decision is expected during the summer. A positive ruling by the ECHR would enable Berlusconi to seek re-election for public office, and this could accelerate the centre right’s support for snap elections in October 2017. However, this support also depends on an agreement between Berlusconi and the Northern League on who will lead the combined centre right opposition parties into the election.

Most pundits, however, do not predict that a Five Star government will be sworn in after the next election…

Despite Renzi’s comeback, the Five Star Movement remains the favorite to come first in national elections. Summer is coming and for Italians that means migration will again become a key issue: 181,000 migrants arrived in Italy in 2016, and more are expected this year.

Carmelo Zuccaro, a judge in Catania, has made several statements likely to inflame the debate. According to Zuccaro, there is proof of direct contacts between African people smugglers and drug traffickers and some NGOs patrolling the Mediterranean. Zuccaro believes that in 2017 more than 250,000 migrants will come to Italy, most crossing the Mediterranean during the summer.

While his claims, already much disputed, will be scrutinised further during coming months, they have already generated heated debate among Italian politicians with the controversy likely to favour the populist Five Star Movement and the hardline Northern League. Within PD, the Minister of Internal Affairs Marco Minniti tops confidence ratings among ministers for his tough, law-and-order approach to security issues. His profile is likely to rise further during the summer in an attempt to quell a Five Star surge.

There are other leadership rumblings. The young Mayor of Turin, Chiara Appendino, is the rising star of the Five Star Movement. According to Italian journalists, Davide Casaleggio (the owner of Beppe Grillo’s web platform, and de facto party co-chairman with the comedian) favors her candidacy as the national leader of the party over the lacklustre Luigi di Maio. If Appendino is elevated to the national leadership, the Five Star’s electoral appeal will no doubt be strengthened.

Most pundits, however, do not predict that a Five Star government will be sworn in after the next election even if the party wins more votes than PD. Most predict another ‘grand coalition’ government.

If the election is close, Forza Italia could well be part of the new mix which means Silvio Berlusconi could play an important role in the formation of the next government even if his own party polls poorly. If that happens it is no means certain that Matteo Renzi’s dominance of PD will mean he will resume the Prime Ministership. There’s even a chance, in the event of an impasse, that a continuation of the consensus style of Gentiloni could be preferred.

Mike Rann is CEO of the Rann Strategy Group. He was Premier of South Australia from 2002 to 2011 and is a former Australian ambassador to Italy.