I’m told that I have more number-one albums in Australia than even The Beatles, but just like many other people, my path in life to this point has been a turbulent one.

I grew up in poverty in the outer suburbs of Adelaide. My parents, who were Scottish immigrants, came from worse poverty than I did. I’ve written about the hardships and trauma of my childhood and teenage years recently in my memoir Working Class Boy.

I’ve also been lucky. And I don’t just mean incredibly lucky to get picked as a teenager to join a band called Orange that became a much bigger band that we called Cold Chisel.

The only thing I can remember anyone telling me was to leave school as quickly as possible to get a job in a factory.

At my high school, in the early 1970s, there were supposed to be people who came around and gave career guidance to students but they never came near me. The only thing I can remember anyone telling me was to leave school as quickly as possible to get a job in a factory.

No talk of university or extra study for a wild kid like me. Didn’t matter what it was, just “get a job”.

And the thing was, unlike today, when big employers like those in the car manufacturing industry have raced out of this country, there were many more opportunities for kids without skills who did not come from middle-class families.

Back in the day, even if your family was disadvantaged, you could leave school without a Year 12 qualification and no skills to speak of and still find a job and build a future.

I’m told by the data-crunchers at the Brotherhood of St Laurence that youth unemployment rates when I was a teen in the early 1970s were around 3 per cent. What a difference the decades make. Today, the youth unemployment rate is over 13 per cent across Australia, and to our shame is much higher in some suburbs and rural areas.

In the 21st century, for young people growing up in suburbs like Elizabeth in northern Adelaide, or Frankston in south-eastern Melbourne, or Logan in Brisbane, or anywhere in outer-western Sydney, it’s that much tougher.

From parents to governments, we owe it to the next generation to do better on this, don’t we?

I didn’t look very hard for work in 1973 when I was 16 and looking for my first full-time job.

At my step-dad Reg’s insistence, I did send out applications for a bunch of apprenticeships and, lo and behold, actually landed a gig with the South Australian Railways as an apprentice moulder in their foundry (the job, among other things, included pouring hot molten metals at about 2000 degrees Centigrade).

I found a mentor in one particularly gnarly old guy, Tony, who took me under his wing and taught me what he knew. Tony had been working at that foundry for most of his life and before he retired he wanted to pass on his knowledge to me.

While I did not last the distance of that apprenticeship – I was determined to chase my rock ’n’ roll dream – I do think about those days in the foundry from time to time.

That job I did is now long gone, and if it exists anywhere is being done somewhere offshore. There are no manufacturing jobs for life like the one Tony had, either. The world of work has become that much more complicated.

Yet too often we keep blaming the victims of these huge economic changes rather than addressing the challenge of helping people into working life.

At the human level, whether you live in Elizabeth or somewhere more flash like Point Piper in Sydney, I think we basically all have dreams for a happy life, however we define it.

Take it from a working-class man – we all do deserve some hope that we can achieve our dreams.

Jimmy Barnes is a musician and author. This column was written for the Brotherhood of St Laurence’s Youth Unemployment Monitor, out today. His first children’s book, Och Aye the G’Nu will be released on April 1, with the companion CD, featuring The Wiggles, to be released by ABC Music on March 31. More information here.

Barnes writes about the hardships of his youth in his memoir Working Class Boy, published late last year. 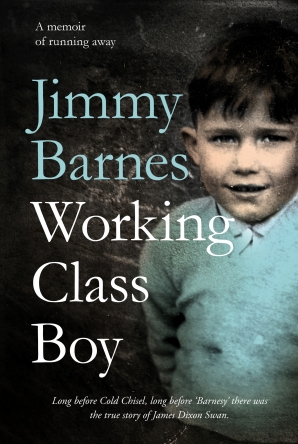