Jack Klemich lost his life to meningococcal disease in May 2009. He was 18 years old. Jack was a fit and healthy young man. He played football for his school on Saturday and went to an 18th birthday party that night. On Sunday morning, he woke up with a headache, which steadily grew worse throughout the day. A doctor was called, but was unable to make a diagnosis. In the early hours of Monday, Jack was rushed to hospital, unconscious. Later that day, our gorgeous boy was pronounced dead and his life support was switched off.

Everyone misses Jack terribly –his sisters, his cousins, his school mates, his fellow sportsmen and his friends – but for us, his parents, it has been seven years of pain which is hard to bear. We love our three children beyond belief and to lose one of them has created indescribable agony.

Meningococcal B is a killer. However, there is a vaccine commercially available and more than 10 million doses of Bexsero® have been administered worldwide. Our daughters have been vaccinated – it’s not unlike a flu or tetanus jab – and thankfully, they are now safe from this horrific disease.

This year, the University of Adelaide and SA Health are conducting a study for school children across the state enrolled in Years 10, 11 and 12. The study – “B Part of It” – will examine into the impact of immunising large community groups against Meningococcal B.

If all schools and all eligible children partake in B Part of It, more than 60,000 South Australian kids will receive a free – and potentially life-saving – vaccine. To have it administered through your GP would cost around $300.

For all 60,000 children to be included in the study, first, the schools must agree to participate. Thankfully, nearly every school in the state has signed up.

But now, urgently, parents and eligible children have until the end of this month – just a few more precious days – to sign and return their B Part of It consent forms.

If you are a parent, please find out if your child’s school is participating in this groundbreaking study. Make sure you have those consent forms signed and back to the school by the end of February – or your child will miss out. Most schools throughout the state have joined the study, but your child cannot be vaccinated without your signed consent – and theirs.

As a family, sit down and discuss B Part of It and why it is so very important to get on board. Share our story, let Jack help you and your family. We can think of no greater legacy for our wonderful boy.

Today, Jack’s seat at our dinner table remains empty, but Meningococcal B seems ever present in our home.

South Australia has had the highest rate of meningococcal disease in Australia since 2012, with more cases in adolescents than infants. B Part of It will study what is known as “herd immunity” – that is, if enough people in a community are vaccinated against a disease (just like measles and mumps), does their immunity protect their families, friends and those they are in close contact with?

Jack was in Year 12 and, had he not died, he probably would have suffered irreversible brain damage from this devastating disease. Others who contract Meningococcal B lose limbs from a bacterium that is often virtually undetectable until it is too late.

As Jack’s Mum and Dad, we support vaccinations for whatever diseases may adversely affect children – measles, mumps, polio – and meningococcal disease is no different.

After what we’ve been through, we find it hard to comprehend how any parent could roll the dice with their child’s life by not vaccinating. We see immunisations as just as essential as strapping a seat belt on our kids before setting off on a car journey – to us, it is a no-brainer. 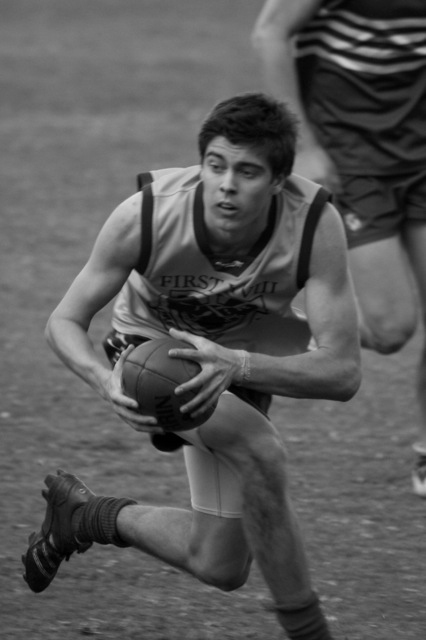 Jack Klemich playing his final game of football, only days before he died. Photo courtesy the Klemich family.

As a family, we only wish this study had been conducted 10 years ago. Back then, Jack was in Year 11 and – had this option been available to us – he would have been alive today and would turn 27 years old in September.

If Jack was with us now, we wonder what he would be achieving. He would have, not so long ago, been to a great mate’s wedding and would attend a gym owned and operated by his best mate. He would be watching another lifelong friend playing AFL for Greater Western Sydney, and be proud of some friends who have just qualified as doctors. We would enjoy our evening meal together as a family of five, and he would have developed his relationship with each of his sisters, from one of teasing, to becoming friends as adults. We would talk about Taylor Walker being appointed captain of the Crows and wonder if Eddie Betts would kick goal of the year once again. Going to the footy is not the same without Jack, and he would have loved the new Adelaide Oval.

We miss him. Today, Jack’s seat at our dinner table remains empty, but Meningococcal B seems ever present in our home.

The results of this nation leading study will provide a valuable insight into this dreadful disease. The conclusions will be shared with medical professionals worldwide and will, hopefully, assist to one day eradicate Meningococcal B. Most importantly, however, this research could save your child’s life.

Please, for your own benefit and the benefit of your children, support B Part of It and return the consent forms to your child’s school today.