What were you thinking Adelaide?

Stumping up what was no doubt a sizeable chunk of cash to watch a couple of old pugs clash zimmer frames for 10 rounds.

Ten years after they first met, Danny Green and Anthony Mundine have nothing left but manufactured animosity, and a deep, burning desire to make money.

The South Australian government, in a move that has astounded many, put up the funds to lure the heavily-hyped rematch to the Adelaide Oval on Friday, February 3.

As Australian boxing goes, it’s about as audacious as Don King’s decision to ask a Zaire dictator to put up $5 million for the Rumble in the Jungle.

But they’re taking us for mugs.

Green is 43, and his last meaningful fight was five years ago when he was knocked into next week by Krzysztof Wlodarczyk.

Mundine, 41, last took on a world class opponent in 2014, when he was brushed aside by Joshua Clottey, himself a few years past his best.

It was almost comical to hear Mundine moaning about the old hip injury that has plagued him for several years.

You could be forgiven for confusing him with a grizzled retiree on the golf course, cursing a wayward swing.

It horrifies to think that this could be the richest, most attended fight in Australian boxing history, because it means absolutely nothing.

It’s about as relevant as the night Jeff Fenech and Azumah Nelson squared off for the third time – both men so far past their prime they might have been offered a seniors’ discount on the ticket price.

Let’s not forget, it was hardly a classic the first time Green and Mundine met. 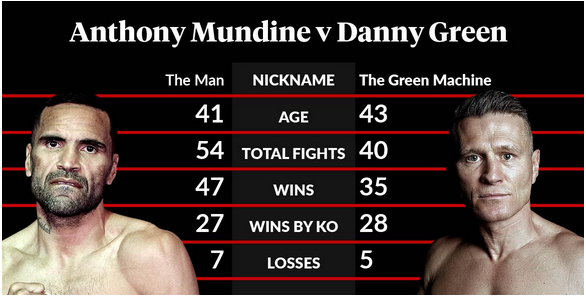 Mundine danced his way past a weight-drained Green en route to a unanimous decision win that was only marginally more exciting than watching grass grow.

The weight is again an issue, with Mundine agreeing to a catchweight of 83kg.

In Green’s last fight he weighed in at 86.85kg, while Mundine was only 69.8 before his last bout (a TKO loss to Charles Hatley).

Mundine must really like money if he’s willing to forgo all that weight to take on Green.

Especially given how vulnerable he’s looked in his past few fights.

Green’s heavy hands could spell big trouble for Mundine if his legs don’t have the energy to carry him away from those bombs.

At the announcement of the fight on Tuesday, South Australian sports minister Leon Bignell – clearly a man with a good sense of humour – said he had recently re-watched the first bout.

“These guys are supreme athletes,” he said.

“Last night I went on YouTube and watched their fight from 2006.

“They just hit each other all night.”

Mr Bignell, who’s never been to a fight before, got Green-Mundine confused with Rocky Balboa’s first tussle with Apollo Creed.

The South Australian government could not reveal how much taxpayer money was used to lure the fight to Adelaide.

However much they paid, it was too much.

"They hate each other": Bignell channels Don King

As far as adverts for your city go, this is about as bad as it gets.

If you know boxing you already know this fight stinks.

And if you’re a casual fan who’s read the barbs in the press and has taken a side in Australian boxing’s biggest con, do yourself a favour and save your money.

Whoever’s hand gets raised on February 3, this thing will have no winners.

This story was first published at Thenewdaily.com.au