Adelaide-based artist Jason Sims works in glass, mostly. More important than his choice of materials, however, is his choice of ideas – he employs trickery and illusionism to captivate his audience. Sims is an entertainer.

Sims learnt the art of entertainment not at art school nor in the studio, but on the stage.

In a previous life he was a comedian, performing at local haunts including Adelaide’s home of comedy, the Rhino Room. As Sims says: “Nothing compares with getting a laugh up on stage but I think I chose the right career. And you never know, if this art thing doesn’t work out, I might just make a comeback some day!”

Practising artists Julia Robinson and Roy Ananda met at art school in Adelaide in 2000. Robinson recently won the SALA 2016 Advertiser Contemporary Art Award while Ananda currently has an exhibition, How to write a fan letter, at Hugo Michell Gallery in Beulah Park. Teaching together at Adelaide Central School of Art, their lives are intertwined in more ways than one.

They also share a passion for Dungeons & Dragons, the fantasy role-playing game that can occupy them both “in role” for hours at a time. It’s a pastime whose influence seeps into their work – Robinson’s folkloric objects and Ananda’s take on the cult of fandom (with a particular focus on Star Wars) have undoubtedly been inspired by their shared love of fictive and imaginary realms. I wrote about Ananda’s tribute to Star Wars, titled Slow crawl into infinity,
in one of my columns last year.) 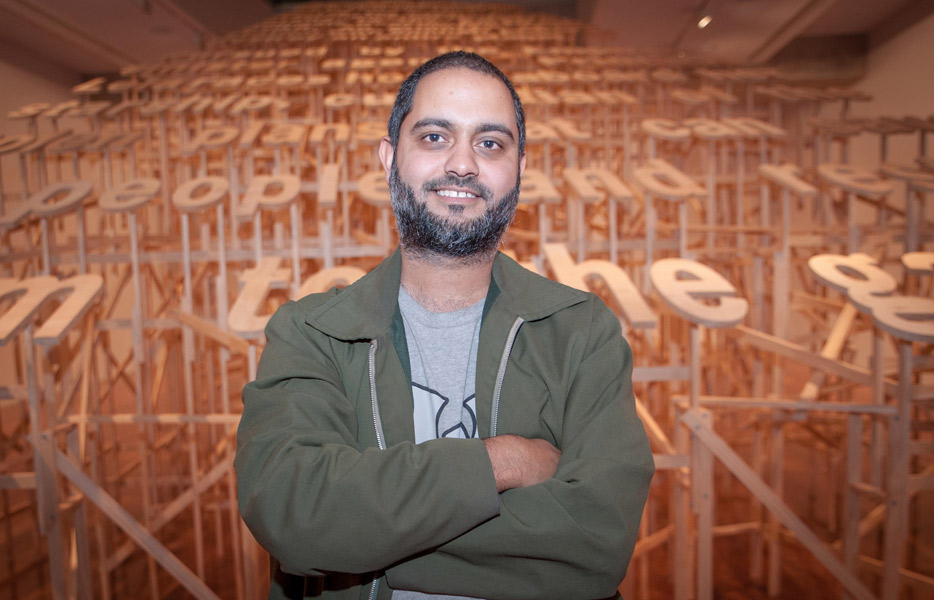 Inspired by imaginary realms: Roy Ananda with ‘Slow crawl into infinity’ at the Samstag Museum of Art.

Ananda recently told me about the origins and impact of his love of the game: “My parents bought me my first D&D rules set when I was 10. I have no doubt that a childhood and early adolescence spent devising and inhabiting imaginary spaces (castles, dungeons, forests, etc) laid important groundwork for my later sculptural endeavours.”

After taking a hiatus from D&D, Ananda returned to it in his 30s and invited his partner along to see for herself what all the fuss was about. Robinson was promptly hooked.

“Once the unfortunate misconceptions about the game were dispelled – for example, that it is the domain of dysfunctional social misfits – Julia immediately saw the resonances with her research into, and extrapolations of, folklore and mythology,” says Ananda.

Further, he adds, D&D’s fusion of improvised theatre and recreational maths addresses the “deep-seated need human beings have to create myths and tell each other stories”.

For multimedia-savvy Ray Harris, roller derby is where it’s at. The Adelaide artist’s love affair with the no-holds-barred contact sport began only last year but is already offering her a creative outlet with an edge. Harris’s alternative identity is Polka Dodge and her team is Dames of Hazard. Like a character drawn straight from her video work, she’s dressed head-to-toe in red and white polka dots while weaving her way around the track with fierce finesse.

Passionate about plants: Robert Hannaford with Nick Mitzevich at the Art Gallery of SA exhibition of his work.

Thanks to his very public profile, Robert Hannaford’s secret life is no longer much of a secret. The prolific painter loves to propagate local native plants behind his farmhouse near Riverton. It’s a delicate and difficult craft.

Hannaford’s love of plants and his care for the environment has inspired The Greenhouse at the Art Gallery of South Australia. This interactive verdant space has been created with the help of Honest Earth to complement the Robert Hannaford exhibition, now in its last days.

The secret and not-so-secret lives of artists remind us that there is an art to everything. Our passions and peccadilloes define us.