Every single day, dozens of new articles appear stating that Donald Trump is unqualified and/or unfit to become president of the United States.

Some of these articles are based on Trump’s character and personal record, others focus on his unclear policy proposals.

Unfortunately, the truth is that Trump is almost as qualified as some other successful presidential candidates, and his policy proposals are just as vague as those of several others who ran for the presidency before him.

Looking back in time shows that a focus on issues and character has always been present in US presidential races.

When the race is mostly focused on character, Americans usually get an array of sweeping statements and hyperbolic one-liner slogans. But even when the race prominently features policy proposals, they seldom are well-crafted and coherent, and often take the form of cryptic empty promises.

The most famous cryptic empty promise ever sold to the American electorate was Franklin D. Roosevelt’s “New Deal”.

In 1932, during the presidential campaign, Roosevelt had no actual idea of what this New Deal was going to be.

Only way after his electoral victory, when he began to put Keynesian economics into action, did the New Deal become a clear strategy on how to take the country out of economic recession through government intervention.

Similarly, Richard Nixon in 1968 was elected by convincing the American people that he had a “secret plan” to end the war in Vietnam.

Needless to say, such a plan never existed and if anything Nixon actually escalated the war after the election.

Several years later, in 2000, George W. Bush won his first of two terms as US president with a proposal to enact policies that he liked to define as “compassionate conservative”.

Compassionate conservatism is a school of thought built on thin air that no one ever heard of before or after that election. Clearly, these cryptic empty promises made by presidential candidates had different results.

The New Deal was extremely successful. Nixon’s secret plan for peace was the opposite of what he actually did, and compassionate conservatism never really came into existence.

Nonetheless, it is clear that even when issues are front-and-centre during a campaign, often there is no actual well-developed policy proposal behind them.

Even more often, however, presidential races are won almost exclusively on the character of the contender. This includes an incredible array of instances when people were elected without any real qualification.

Dwight Eisenhower in 1952 had considerable experience as a military leader, but no experience when it came to politics and public policy.

John Kennedy, eight years later, won a presidential election after accomplishing very little as a congressman and boasting one of the worst attendance records in the history of the US Congress.

Ronald Reagan, arguably one of the least-qualified people to ever head the executive branch of a Western democracy, was catapulted from General Electric host and mid-fame actor to governor of California and presidential candidate in only nine years.

Bill Clinton, in 1992, preferred talking about his humble origins in “a little town called Hope” rather than about policy, and spent most of his campaign defending himself against allegations of marital infidelity, playing his saxophone, and explaining that he did smoke marijuana, but without inhaling.

Finally, Barack Obama won in 2008 with an array of sweeping statements and hyperbolic one-liners: “Yes we can” and “change you can believe in” are great political slogans, but I am yet to understand their exact meaning.

Yet, Obama’s vagueness convinced not only American voters, but also the Nobel Committee — although we now know that the latter regretted giving away a Nobel Peace Prize in 2009 on the promise of unspecified accomplishment.

The point is that this year’s election is not different from past elections.

However, some of the tendencies we can clearly see throughout past elections are extremely heightened in the present contest.

There has never been a presidential candidate in American history who has made a wider and less-restrained use of hyperbolic one-liner slogans than Donald Trump.

While “Winter is Trumping” and other parodies found around the internet are funny and entertaining, it is concerning that they are built utilising actual statements by the Republican candidate.

At the same time, it is unclear what “America first” actually means in terms of policy, beyond the bite-sized general information we can gather from Trump’s speeches.

Accusing Donald Trump of being unqualified for the office, or trying to “bring back the issues” into the electoral campaign have the potential to fail miserably as a political strategy.

Demonising an opponent has worked only once in modern American elections. The year was 1964, and incumbent president Lyndon B Johnson was running for re-election, soon after taking office due to Kennedy’s assassination. 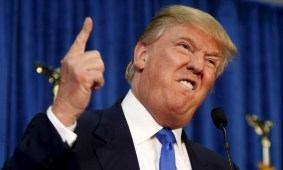 Trump unleashed, but it’s still the Republicans running for cover

The Republican nominee, Barry Goldwater, was certainly a right-wing Republican, but he was a successful career politician with a sizeable congressional record.

Yet, the Johnson campaign depicted him as a crazy extremist, ready to begin a nuclear war. The campaign was successful, thanks also to the famous “daisy ad” aired in 1964.

So far, the Clinton campaign has yet to find its own “daisy ad”.

It should understand, however, that this particular road to victory is a very difficult one.

Dr Rodrigo Praino is lecturer in Politics and Public Policy at Flinders University’s School of Social and Policy Studies and director of the Graduate Program in Public Administration online. He is an expert in American politics and elections and has published extensively in the field. His works appeared in journals such as American Politics Research, Social Science Quarterly and Congress and the Presidency. His academic work has featured prominently in the international media, including the Washington Post, Politico, the Huffington Post, the Pew Research Centre and the Discovery Channel.