This week’s wild weather is bringing equally wild claims about South Australian electricity, prices and renewables. And it is just the latest battle in a longer war over changes to how we generate our power.

Remember when Tony Abbott famously said that Whyalla would be “wiped off the map” with a carbon price? It wasn’t. But if you’ve followed reporting of electricity prices in South Australia lately, you could be forgiven for thinking that the entire state was about to fall into the Great Australian Bight.

Hardly a week goes by without a headline like Electric shock: SA business fears being stuck with high costs for years, in which we learn that “the culprit [is] the Weatherill government’s obsession with leading the nation in renewable energy.”

And statements like this, where we almost lose Whyalla. Again.

And in case you didn’t remember, “South Australia’s wind and solar power are among the main culprits.”

Groups such as the South Australian Council for Social Services are also worried about households’ rising power bills.

Before we re-start coal mining or go nuclear, let’s take a closer look at what’s going on.

Are electricity prices higher in South Australia? Yes, as they are right across the National Electricity Market (NEM) right now.

Are prices higher in SA than other states? Yes, but not by more than the small amount they have been for most of the history of the NEM (and before that, too).

And are renewables to blame for either of these effects? No.

The real reason that wholesale electricity prices are higher in SA than in the three eastern states is that the cost of conventional generation is higher. This is because SA does not have access to large, low-cost coal resources. SA’s coal is low-quality and expensive compared to coal in Victoria, NSW and Queensland.

Let’s look at electricity prices in the NEM states: 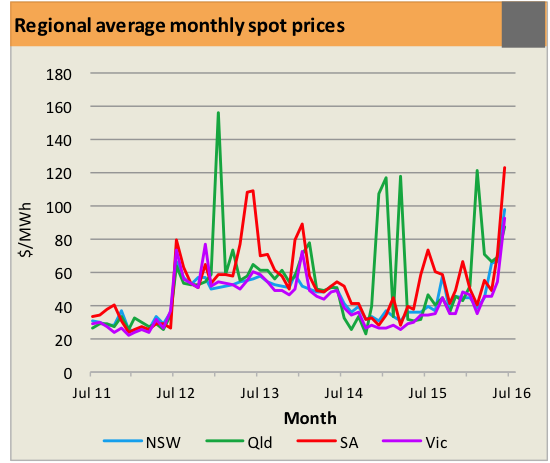 Source: Cedex July 2016, by pitt&sherry and The Australia Institute

We see that historically, SA prices have been mostly just a bit higher than the other mainland NEM states, particularly NSW and Victoria, while Queensland has also seen several price spikes.

That relationship has not changed. Average spot wholesale prices in each of the four mainland NEM regions (states) during June 2016 were higher than at any time during the carbon price period, with the sole exception of January 2013 in Queensland. 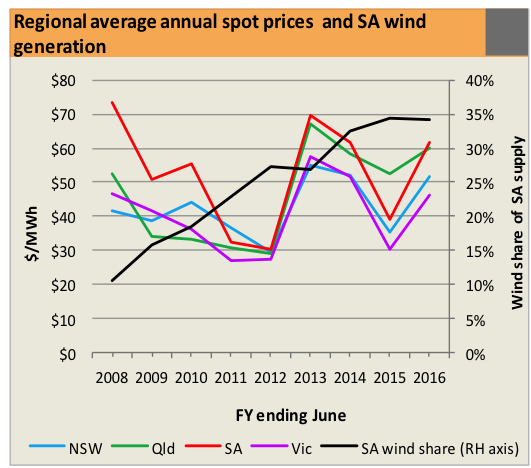 Source: Cedex July 2016, by pitt&sherry and The Australia Institute

In the graph above, the black line shows a steadily increasing portion of SA power coming from wind. The other lines show the average annual spot price in each state. The average annual price in SA in 2007-08, when wind supplied only about 10 per cent of total demand, was higher than in 2015-16, when it supplied nearly 35 per cent.

So what is driving higher prices in South Australia and the other states? The two most important factors appear to be higher wholesale gas prices, partly caused by the fact that the east of Australia is now linked to Asian gas prices via new gas export terminals at Gladstone in Queensland, and lack of competition between non-wind generators.

SA is particularly exposed to both factors. Following the closure of the Northern power station, it has become heavily dependent, during low wind periods, on gas generation, and almost all the gas generation is controlled by the two large “gentailers”, AGL and Origin.

So what can be done about this?

Unfortunately, the gas export genie will not go back into the bottle. There is now no breaking the link between Australian gas prices and world gas prices, ensuring prices will rise.

More constructively we can work to make the electricity market more efficient.

One change that would help is changing the way electricity prices are set in the NEM. Prices are currently set in half-hour blocks, based on the average of the five-minute intervals in those blocks. If this was changed so that prices were settled every five minutes, it would increase competition, and assist smelters that can manage their power demand as well as battery storage. This change would reduce prices and emissions.

This change is currently being considered by the Australian Energy Market Commission.

It will be interesting to see if the South Australian businesses, social service organisations and commentators so eager to blame renewables for high prices are prepared to support a change which would increase competition and reduce dependence on gas.

Hugh Saddler is the senior energy analyst at infrastructure consultancy Pitt & Sherry and Rod Campbell is the research director at think-tank The Australia Institute.