The Xenophon brand actually saw its Senate vote decline by 3 per cent and, with one Lower House seat (Mayo) claimed and a slim chance in another (Grey), the outcome – despite much hype – is merely a good start.

The Nick Xenophon Team will still have to overcome some huge political tests if it is to successfully rival the major parties in the long term.

The immediate challenge for NXT lies with how it handles intense national scrutiny when the responses no longer simply rest with the nation’s best “retail politician”. Xenophon will no longer solely control the message, even the stunts, and herein lies both high risk and large opportunity.

We do not know the political acumen of the newly elected NXT MPs, as the key players were sheltered by their leader during the campaign.

From team Xenophon to a fully fledged party

As Xenophon endeavours to transform his team into a fully fledged party, this will change the “Xenophon phenomenon” from a bunch of volunteers and supporters to one with members who will be keen to participate in policy debate.

They will also play a role in that rather vital practice of pre-selecting candidates. It would be laughable if Senator Xenophon sought to deny such involvement, but it will no doubt be a worry for him as he will no longer control the art of political compromise and deal-making that has been his forte.

It is impossible to imagine a docile membership happy to sit back and let Xenophon and his parliamentary crew dictate the policy platform.

As the platform stands today on the NXT website, it is little more than an array of principles, with little detail and little that might allow one to make much sense of what the leader means by describing it as a “party of the sensible centre”.

The most immediate challenge, however, will arise in the coming days if the election results in a hung parliament.

The new NXT member for Mayo, Rebekha Sharkie, will have her political mettle tested. Xenophon will still be his team’s “kingmaker”, but Sharkie and his likely two fellow senators will now face a quizzical media keen to know what makes this “sensible centre” tick.

To correct one fallacy, NXT will not be the Senate’s balance-of-power party; rather, it will be a player on a truly motley field. However, it is fair to postulate that Xenophon may garner kudos as a mentor to a number of newly elected senators. A loose “block” led by Xenophon is a viable option and someone as savvy as him no doubt knows this is worth fostering, as it would raise his emerging party’s profile.

What about unity within the NXT ranks? Those elected alongside Xenophon are his long-term allies and a trusted political advisor, so there is no analogy with the Palmer United Party experience because Clive Palmer appointed acolytes and simply spent loads of money to win seats. Mind you, one of those acolytes, Jackie Lambie, is forging a name using a political instinct and populist ideology not all that different in style from Xenophon’s.

What is the electoral landscape for NXT today?

With 20 per cent of the vote remaining to be counted, NXT banks one House of Representative seat and a likely two additional senators. Surely that is a modest outcome, or am I missing something more fundamental?

Yes, there was a strong vote in Barker and Grey, and the statewide average vote is currently around 21 per cent – comfortably double that of the Greens. However, electoral politics is about winning seats, and a double dissolution election simply opens up the electoral turf for minor parties; witness the return of Pauline Hanson’s One Nation. 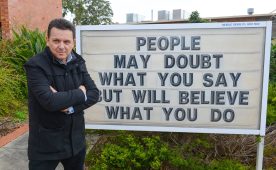 A rejection of political advisors, and their ill-advised leaders

Given the hype surrounding NXT and the largely positive reporting in local media, it is perhaps surprising that Xenophon’s Senate vote has declined by 3 per cent since 2013.

A “decline” was not part the conversation as it related to NXT over the past eight weeks, when one constantly read of the team’s challenge in seats such as Adelaide, Sturt, Port Adelaide and even Kingston. NXT candidates in these seats all fell well short of what might constitute that “new dawn”.

There is much more to say about the Xenophon political phenomenon, but I will conclude by noting that should Xenophon succeed with transforming his Team into a Party (with a new name), and should it remain united with some better definition of its policies, then it follows that the next SA election, due in March 2018, will be a fascinating affair.

There are many individual state electorates within the federal electorates where NXT candidates polled well on Saturday.