In 1974, the American originator of the Citizens’ Jury, Ned Crosby, convened the first pilot Jury in Minneapolis, Minnesota, to discuss national health care reform. Since then, the Citizens’ Jury model of democratic decision-making has spread to six continents and addressed hundreds of issues, ranging from health care and climate change to infrastructure and local agriculture practices.

As executive director of Minnesota’s Jefferson Center, an organisation founded to pioneer the use of the Citizens’ Jury on a wide range of policy challenges, one of my responsibilities is to ensure the juries are fair, legitimate and conducted with integrity.

We are currently using the Citizens’ Jury to tackle difficult challenges such as how to improve diagnostic quality and reduce patient harm in the US health care system, to determine conditions under which patients in the United Kingdom feel their health records should be shared for research and commercial purposes, and to revitalise the relationship between voters and media in the 2016 United States presidential campaign in Ohio – one of the most contentious electoral battlegrounds in the nation.

Like many, I am eager to see the Jury process unfold in South Australia and to listen, along with the State Government, to the voice of residents on the important question of the state’s nuclear future. I will be in Adelaide to observe the first component of this Jury process and to witness your citizens and government embark on a critical examination of the issue.

The decision in question – whether to accept the world’s nuclear waste in South Australia – is, to put it most simply, complex.

The Government must assess the potential environmental and health risks of nuclear waste, as well as the potential economic benefits of storing that waste. The report of the Nuclear Fuel Cycle Royal Commission (NFCRC) thoroughly lays out these technical details. This decision, however, is much broader than the ledger of costs and benefits as identified by a group of dedicated technical experts.

The final decision will affect generations of South Australians. The Government must therefore account for the public’s tolerance of risk now and into the future, a determination deeply informed by the cultural and ethical values held by South Australians.

Such an account cannot be captured in a technical report, uncovered in a poll, or revealed through a referendum. Even with the NFCRC report available, it is unrealistic to assume that many voters will have the time to sort through the enormous body of background information and technical data related to this issue.

So how might the Government fairly and justly determine the public’s stance on the nuclear question?

Premier Jay Weatherill has begun exploring that question by committing to Citizens’ Juries as part of the public consultation process.

This model is not inherently well suited for every public issue or challenge, particularly those that are less complicated or those with fewer potential fiscal and environmental ramifications than the current nuclear question. While this model of citizen deliberation is undoubtedly more resource-intensive than a series of surveys or town hall meetings, it is aptly suited for examining the complex technical elements of this issue.

It will allow South Australian participants to develop a deeper understanding of the information, while providing ample opportunity for reflection, deliberation, and examination of the underlying values that will ultimately influence the decision-making process for those involved and the state as a whole.

A Citizens’ Jury begins with a closely representative group of citizens selected at random to reflect the demographic and political diversity of the population. This diversity is the essential principle of the Jury, ensuring that its discussion and recommendations reflect the perspectives, attitudes, and values of the population from which they are drawn.

Once selected, the Jury is given the time and resources to study an issue in detail, question experts and advocates, consider the trade-offs of any potential decision, and deliberate together to identify critical questions, clarify information for the public and decision-makers, and offer other input as determined by their particular charge. A Citizens’ Jury may also recommend a specific decision, although recommendation need not be unanimous.

The Nuclear Citizens’ Jury gives everyday South Australians the opportunity to guide government decision-making directly, steering SA on a course that reflects the spirit of an informed and engaged public. The report of the first Jury will help South Australians further understand and scrutinise the technical information from the Royal Commission’s report in terms of both the values and concerns of everyday citizens. 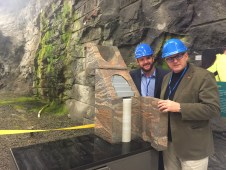 A businessman, an environmentalist and an oncologist walked into a citizens' jury...

I commend the Premier, the SA Government, project organisers, and advocates on every side of this question for ensuring citizens are able to shape the decision-making process on this challenging, contentious issue.

Furthermore, I am hopeful that the process will be conducted with fairness and integrity so that participants will have a meaningful opportunity to shape South Australia’s future on this critical question. Direct citizen engagement in the most challenging issues we face is the most effective strategy to ensure decisions are just and our democracies continue to thrive well into the future.

Kyle Bozentko is executive director of the Jefferson Center. Based in the United States, the centre conducts Citizens’ Juries and other participatory processes to ensure public decisions and policies are informed by citizens.