On Friday, the Federal Government announced that the Flinders Ranges has been selected as the preferred site for a national nuclear waste dump. The land was nominated by former Liberal Party Senator Grant Chapman and his nomination has been endorsed by the Liberal government in Canberra.

The area is Adnyamathanha land. It is Arngurla Yarta (spiritual land). The proposed dump site has springs. It also has remnant ancient mound springs. It has countless thousands of Aboriginal artifacts. Our ancestors are buried there.

The nominated site is a significant women’s site. Throughout the area are registered cultural heritage sites and places of huge importance to our people.

The site is an ancient trade route. It is a very important archeological site for Adnyamathanha traditional owners and also for non-Aboriginal people.

There are frequent yarta ngurra-ngurrandha (earthquakes and tremors). At least half a dozen times each year, we see and feel the ground move.

It is flood land. The water comes from the hills and floods the plains, including the proposed dump site. Sometimes there are massive floods, the last one in 2006. The massive floods uproot trees − you can come out here now and see huge trees uprooted by the 2006 flood. Ten foot tall, lying on their sides! In 1956 a massive flood destroyed Cotabena homestead and all the houses in Hookina township. 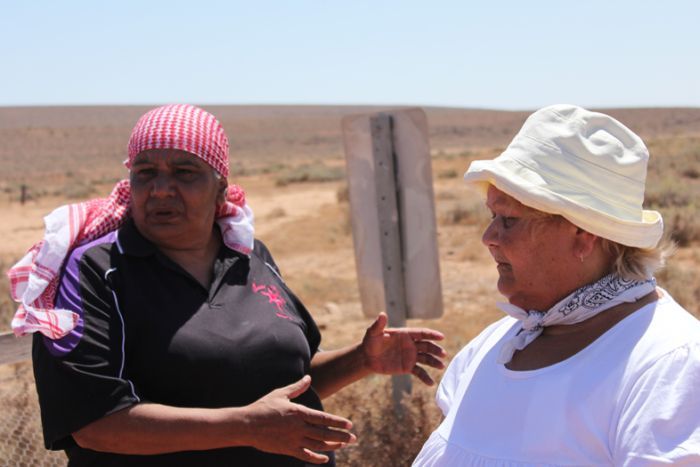 We don’t want a nuclear waste dump here on our country and worry that if the waste comes here it will harm our environment and muda (our lore, our creation).

We call on the federal government to withdraw the nomination of the site and to show more respect in future. We call on all South Australians − all Australians − to support us in our struggle. Adnyamathanha Traditional Owners and Viliwarinha Yura Aboriginal Corporation will fight the proposal for a nuclear waste dump on our land for as long as it takes to stop it.

Last year I was awarded the SA Premier’s Natural Resource Management Award in the category of ‘Aboriginal Leadership − Female’ for working to protect land that is now being threatened with a nuclear waste dump.

But Premier Jay Weatherill has been silent since the announcement of six short-listed dump sites last year, three of them in SA. Now the Flinders Ranges has been chosen as the preferred site and Mr Weatherill must speak up.

The Premier can either support us ‒ just as the SA government supported the Kupa Piti Kungka Tjuta when their land was targeted for a national nuclear waste dump from 1998-2004 ‒ or he can support the federal government’s attack on us by maintaining his silence. He can’t sit on the fence.