Who among us, watching Joe Hockey deliver his “lifters and leaners” budget speech just one year, 11 months and 21 days ago, would have thought that this first-term Coalition government would so proudly hand down a budget so light on ideology?

There is ideology in the 2016-17 budget, to be sure. Perhaps the best example of that is the redefinition of a small business, up from A$2 million in annual turnover to $10 million, and the cut in the tax rate to the businesses that will populate that dramatically expanded sector. That’s all part of a 10-year tax plan that ultimately promises an across-the-board company tax cut.

But 10-year promises in a country with a volatile three-year electoral cycle aren’t worth much, and there’s also a slug on the superannuation perks enjoyed by the very wealthy and a harder crackdown than last year’s on tax avoidance by big international companies.

It’s a heavy contrast with where this government started.

Back when Hockey thought he had a happy future as treasurer, and was taking on the “age of entitlement” in the Abbott government’s first budget, the “budget emergency” created by Labor necessitated drastic action. Industry assistance was killed. University fees were to be deregulated. Pensions and family payments were to be squeezed. People going to the GP were to be slugged with a co-payment designed in part to discourage them from going to see their doctors so frequently.

And then there were the young unemployed. They were told that if they were under 30 and found themselves out of work they would have to wait six months before being able to get the dole.

It was harsh and unexpected, and it was about remaking the nation, reducing the role and the size of government. Australia would be recast as a nation of self-reliant, self-starting types. Voters weren’t interested.

Government spending in 2016-17 will be the highest as a proportion of GDP outside a recession.

Last year’s budget, which was fashioned in the wake of Tony Abbott’s (and, by implication, Hockey’s) near-death experience in the Liberal partyroom, was the transitional document to this one. It abandoned the deficit hysteria. It had to, if only to lessen the embarrassment to the then prime minister and treasurer, caught out as they were by their previous budget pronouncements.

It trialled the jobs and growth mantra that is central to Scott Morrison’s 2016-17 budget. It set the pattern for this budget. It was big-spending, big-taxing. The wild predictions of a budget surplus inside this term had been well and truly abandoned.

And it decided to be nice to the young jobless, who have come to act as the canary in the budget coalmine for this government. In this budget, young people who are out of work get even more love and attention, with an expanded work-for-the-dole type program offering them internships that purportedly train them to be job-ready.

There is a clear rhetorical gap in Morrison’s message. On the one hand he is saying that Australians – employers, employees, government – must live within their means. On the other, he is delivering a budget program that, far from eliminating the deficit as promised at the 2013 election, is built on an even higher level of spending than the expenditures associated with the previous Labor government.

Government spending in 2016-17 will be the highest as a proportion of GDP outside a recession. The last budget deficit was $33 billion. In this budget it is predicted to be $37.1 billion.

In an interview soon after delivering the budget, Morrison acknowledged that the economy was “difficult” and it had proved to be hard to stimulate investment.

Clearly, it is not a radical budget. The hair shirt has well and truly been cast off. It definitely contains the key characteristics of traditional pre-election budgets. It is not a spending spree, full of big handouts. But there are some for middle-income earners and small businesses, and it has the optimistic settings that any government looking to be re-elected has to take up. 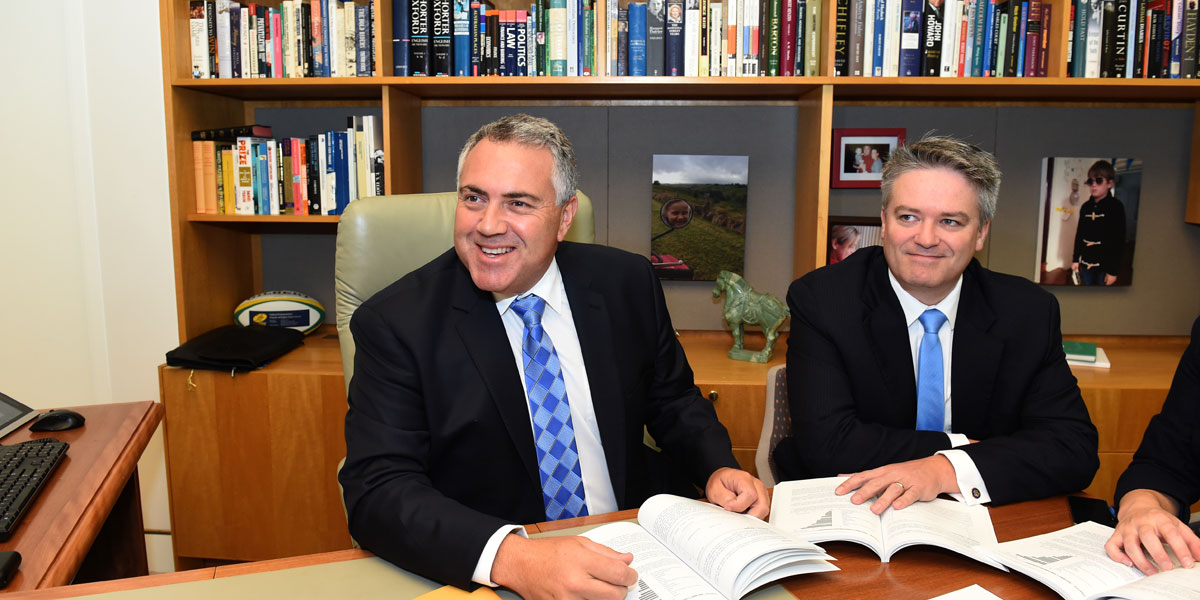 The Budget is a long way from the “lifters and leaners” ideology of former Treasurer Joe Hockey, pictured (left) with Finance Minister Mathias Cormann.

The message is that everything’s OK, the transition from the mining boom is underway, all will be well, your kids will get jobs. Don’t worry. No-one is being robbed by the government – not anyone that most of you would know, anyway.

Is the optimism justified? Growth is predicted to stay at 2.5% in this budget period, rising to 3% next year and the year after that.

It seems a bold assertion given that while the budget lock-up was going on the Reserve Bank cut the cash rate to 1.75%. Interests rate are at an historic low, which suggests that deflation is a danger.

Every treasurer believes their budget is the game-changer. Morrison repeatedly characterised his first budget as “not a typical budget, not an ordinary budget”. Instead, he insisted, it was “a plan”.

Australia has seen a lot of plans in recent years. It has also seen quite a few treasurers of late; Morrison is the fourth inside three years. Hockey’s first budget was a plan but that plan crashed. This was a don’t-frighten-the-horses pre-election budget that will probably be subsumed into the campaign a week from now.

Politically, it could have been worse for a government that hasn’t had a good election year so far.

Shaun Carney is an Adjunct Associate Professor in the School of Social Sciences at Monash University.