In his InDaily review of my book, On Being a Minister, Matt Abraham suggests that a ministerial life is a life in a bubble; when Matt put this to me on his and David Bevan’s morning ABC radio program, I was quick to agree.

I understood what he meant. Ministers do lead privileged existences: they are well paid, they have chauffeurs and plenty of other staff, people stand up when they enter rooms and what I particularly liked was the fact that in question time only ministers and the Leader of the Opposition have glasses of water continually refilled by attendants; shadow ministers and backbenchers have to get their own. Then there are the overseas trips, invitations to lunches, sporting and arts events, hanging out with important and cool people, media attention, being recognised in the street. Ah the glamour!

However, on reflection I am not sure that the bubble metaphor works – a bubble keeps you at a a sanitary distance from the germs and dirt of real life. The famous boy in the bubble, for example.

While it is true that ministers have unique and quite privileged positions – very few ministers are not exposed, on a daily basis, to the very real world.

Let me explain from my own experience:

As well as being a minister I was a member of parliament, representing the outer southern suburbs electorate of Kaurna, stretching from Christies Beach to Aldinga. In the course of my 16 years in parliament, including my 11 years as minister, I was up close and personal with my electors both informally as a local resident doing normal things like shopping, walking on the beach, going to the movies, and formally meeting electors in my office or in their homes or work places.

Mostly these informal interactions were pleasant – a quick ‘how are you’, and a hand shake; but they could be abusive too. Once when buying rolled oats in a local health food shop I was yelled at and threatened by another organic food purchaser about something I had done or not done. No bubble protected me that day. Then there was the night when a drunk bloke with a mental illness banged on my front door demanding help (which I gave him next day when he was sober). I have written in my book about how our wheelie bin was set alight and pushed up against our brush fence – a very scary experience.

But as a local member I visited, over the years, most of the homes in my electorate on several occasions; was yelled at by some of their occupants, but usually welcomed and thanked. I visited every school and church and most work places; I knew the sporting clubs and social groups, the libraries and theatre groups. Very few people (police and priests perhaps) know their communities as well as a member of parliament.

And in my electorate office my staff and I tried as hard as we could to help constituents in trouble. I met people who had been sexually abused, the parents of children who had been abused, parents whose children had life threatening conditions or were so unwell mentally that they were frightened of living with them. I helped an elderly man whose phone had been disconnected because he couldn’t pay an enormous bill created by his adult son, who had subsequently suicided, and who had earlier been ringing sex chat lines in the US after his marriage had broken down.

I met people in tears, in pain, people who were dying, mothers with sons in jail or gangs or on drugs or whose daughters were living with older men. I met with a group who carried a dead and defrosted echidna into my office in protest about land development (the dead echidna spent most of its time in the freezer and was brought out for special occasions]; I met the “nude olympics” organising committee who left me with dozens of photographs of their favourite leisure activity.

To these non-ministerial experiences can be added what happens to you as a minister. Mostly it’s brilliant and a real privilege – you get to meet some of the most wonderful people doing the most extraordinary things. I certainly did in my areas of responsibility – arts, environment and health. These are passionate, committed and determined people in and out of government trying to make our world work better and who want you to help them. 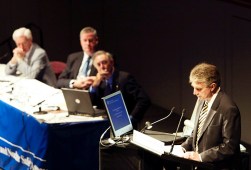 Abraham on Hill: Insights from the political bubble

The final point I’d make about the bubble metaphor is how our community treats ministers and pretty well anyone in positions of authority. If you take yourself too seriously you are quickly brought down a peg or too – that’s the Australian way. If media scrutiny, question time and public meetings where you are yelled at don’t prick the bubble, your friends and family certainly will.

John Hill’s book, On Being a Minister: Behind the Mask, is published by Wakefield Press.