Is occasional gambling safe? Our study found that gambling is like smoking: the more you gamble, the greater your risk of developing problems. There is no safe level of gambling, only risks that increase as you lose more money – even at relatively low levels of losses.

We examined large, nationally representative surveys in Australia, Canada, Finland and Norway, and found that no amount of gambling was safe.

In the graph below, we show the average relationship between money lost and problem gambling index scores in the four surveys. Gambling losses are shown on the x-axes, with problem gambling risk on the y-axes.

Crucially, there is no safe region on these curves where problems do not increase as you lose more money. This is different to alcohol, where moderate consumption may reduce your risk of mortality. 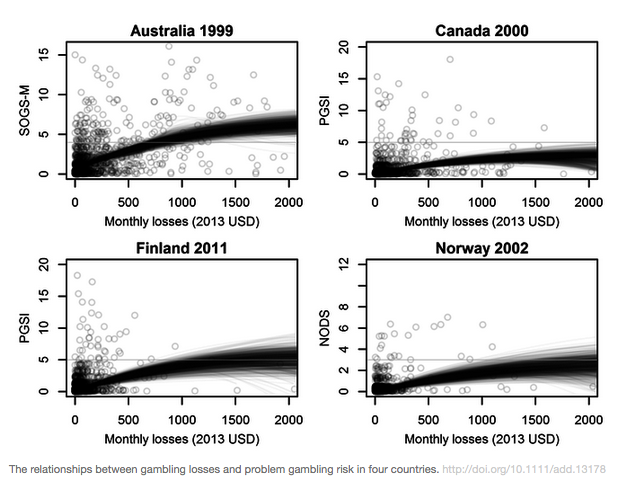 We have known for some time that some forms of gambling are more risky than others. Therefore, we also examined the relationships between losses and risk for different gambling activities.

Electronic gaming machines – known as pokies in Australia, video lottery terminals in Canada and slot machines in the US – were the most strongly associated with problem gambling in every country in our study.

These findings are important because they contradict the conventional wisdom that there is a threshold below which gambling is safe. According to this view, gambling is much like alcohol, in that only after a particular consumption level has been reached does risk mount. It is only after heavy consumption (or losses) that problems supposedly occur.

As a case in point, the axiom that “safe levels of gambling participation are possible” is one of the six fundamental assumptions of the influential Reno Model, which describes itself as “a science-based framework for responsible gambling”.

This claim that safe levels of gambling are possible turns out to rest on two erroneous arguments. The first is an empirical case that supposedly documents low-risk thresholds for gambling.

The most prominent study of this kind found evidence for a “J-shaped” relationship between problem gambling risk and gambling expenditure. A J-shaped curve describes the situation where risk starts off very low and increases significantly only at higher levels of gambling losses (see panel A in the the graph below).

Unfortunately, this conclusion was based on an incorrectly scaled graph. In panel A, the range of money represented by each data point widens from $50 to $500, but the dots are still placed with equal distances apart. When the x-axis is correctly rescaled, a linear rather than J-shaped relationship emerges (see panel B).

The second argument sometimes made to support the idea of safe gambling is based on the anecdotal observation that some people do gamble large amounts without becoming problem gamblers. By extension, the argument goes, problem gamblers need to become like these responsible gamblers who can gamble without adverse impacts.

However, the existence of such individuals does not imply that gambling at that intensity is safe at the population level. For example, while some regular smokers may live to 100, this does not mean that smoking is safe or that we should promote “responsible smoking”. Such an argument fundamentally misunderstands the concept of risk.

Our findings have two important implications for regulation.

First, public information about gambling should not imply that moderate gambling is risk-free. Guidelines and other forms of public awareness campaigning should make it clear that, for poker machine gambling in particular, every increase in consumption increases the level of risk.

As a recent article in the Journal of the American Medical Association put it:

Traditional messaging oriented around “reduce, restrict, limit, ban” may make sense for determinants that have a linear relationship with health outcomes, as with tobacco and mortality.

Our research suggests that this kind of public health messaging should also apply to poker machine gambling.

The second implication relates to the “responsible gambling” model of regulation. This model rests on the notion that gambling in moderation is safe. In contrast, our research suggests that gambling at any level can be associated with harm. And the more money lost, the greater the risk of harm.

There is no threshold below which consumption does not increase the risk of harm. Harm-minimisation policies should seek to reduce the poker machine gambling of everyone, not just problem gamblers.

Francis Markham is a PhD candidate at the Fenner School of Environment and Society, Australian National University.

Bruce Doran is a senior lecturer (Geographic Information Systems) at the Fenner School of Environment and Society, Australian National University.

Martin Young an associate professor at the Centre for Gambling Education and Research, Southern Cross University.