After the success of this week’s ‘Tele Town Hall’, with a Jay Weatherill ‘bot’ cold-calling thousands of voters ahead of a mega-phone-forum, the State Government decided to repeat the process, with its three most senior ministers stationed in a call centre taking questions from electors. Here is a transcript of the event:

JAYBOT: All right. Welcome to my Tele Town Hall. There are 100,000 of you on the line with me right now waiting to ask me questions.

JAYBOT: 6000, is it? Exactly the same number of jobs we’ve created at our oil and gas hub at Gillman.

CALLER: Hi, Jaybot. Does the Treasurer always swear like that?

JAYBOT: Oh, sure, it’s pretty routine, really. But it’s usually directed at me in private. I’ve never witnessed him swearing in front of other public servants.

CALLER: What about in cabinet?

TK: Well, that was a f***in useless question. Next!

TK: F***in hell, who let Duncan McFetridge on the line?

JR: We always end up with some Liberal or other infiltrating our deliberative democracy initiatives. I’m sick of all these left-wingers informing our policy process!

JAYBOT: We need to have a word with the organiser.

TK: Maybe I should do it, being the government’s head kicker…for lack of a better word.

JAYBOT: You’ve never been short of a better word, C-Bomb. Go to it.

(Hangs up) I think they took that on board.

JR: I hope you weren’t seeking to influence them too much.

JAYBOT: I thought it was fairly subtle.

TK: Well, I don’t claim to be perfect, and, you know, I do occasionally slip.

JAYBOT: Well, no-one’s perfect. Besides me, I mean. Let’s take another call.

CALLER: Hi Jaybot, I run a business and I think the Government needs to do more to create jobs. Can’t you provide more contracts to local firms?

JAYBOT: Great suggestion! We’ll incorporate that into our Northern Jobs Plan. What a brilliant idea this Tele Town Hall was! Next caller.

CALLER: Hey there guys. I run a business, and I wish Government would stand aside and let the private sector get on with things. We need less Government interference.

JAYBOT: Another great idea! We’ll adopt that as policy too.

JAYBOT: Never mind, this way we can have our cake and eat it too. Next caller. 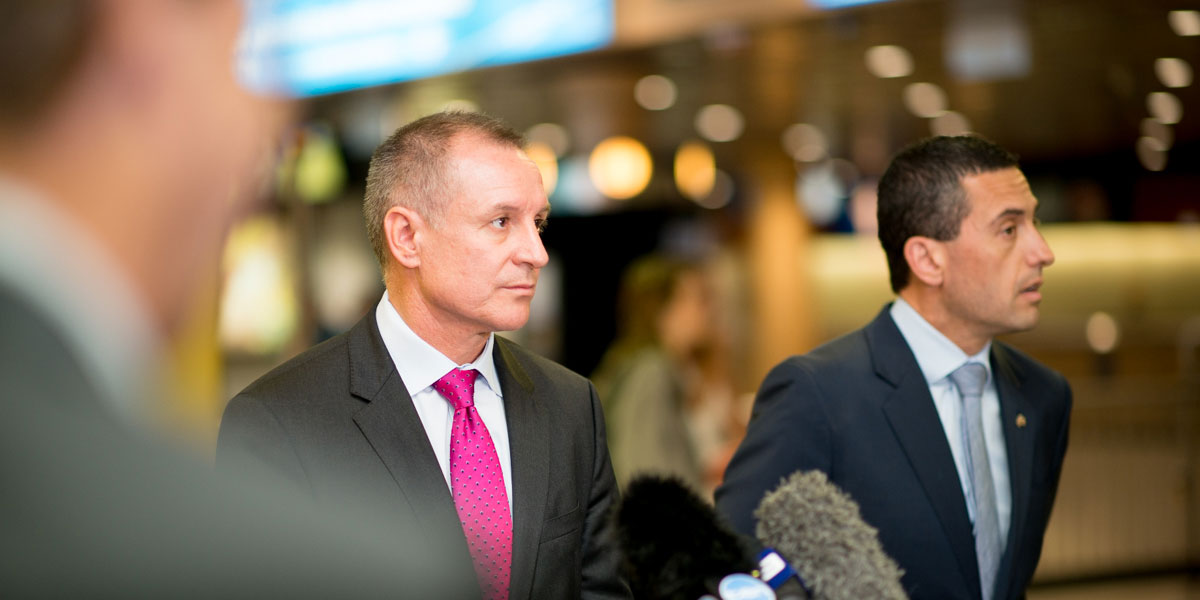 CALLER: Hi Premier, I’d like you to do something about manufacturing in the north.

JAYBOT: Great idea! What did you have in mind?

CALLER: Um… how about something new in the transport space?

JAYBOT: That’s it! Let’s fund a pilot hoverboard project. Right now! C-Bomb, I’m putting you in charge of this one.

CALLER: Hi Jaybot, I have one question… How is this Gillman business different from the Motorola affair?

JAYBOT: Well, I think it’s the absolute opposite. I think the problem there was John Olsen should have been upfront about the fact he’d done some side-deal, and he wasn’t. Whereas we’ve been absolutely clear that we weren’t going out to tender and we were doing that in the public interest.

CALLER: Not according to Bruce Lander. Or the chief executive of Renewal SA.

JAYBOT: And also, Motorola was about phones. So that was completely different. And also, no-one’s resigned over Gillman.

CALLER: Not yet… But it’s the same principle surely? You did a deal with one company to the exclusion of due process.

JAYBOT: Well, I’m not going to apologise for giving a couple of young entrepreneurs a go!

JAYBOT: I meant ‘young’ relative to the Jurassic era.

JR: Anyway, we still got a great deal: the price being offered by Adelaide Capital Partners for that land was good value, full stop! Right, C-Bomb?

JAYBOT: Actually, it was a bonus that we got good value for the land. It wasn’t our objective.

CALLER: So what was the objective?

CALLER: But there aren’t any jobs.

JAYBOT: Sure there are. I’m still Premier, John’s still Attorney and C-Bomb’s the Treasurer.

CALLER: So, it wasn’t about job creation as much as job retention.

JAYBOT: Actually, I think we’re out of time.

CALLER: I think so too.

The JayBot story is true – read it here.

*This alleged quote comes directly from the ICAC report into the Gillman land sale (Koutsantonis denies using the “C-bomb”).