Federal Government moves to restrict public interest litigation in defence of the environment would curtail the rule of law, argues Cristy Clark.

This is particularly pertinent to the move by Attorney-General George Brandis to restrict green groups from challenging major developments under federal law, a direct response from this month’s successful appeal against the approval of the controversial Carmichael coal mine, being developed by the Adani Group, on environmental grounds.

Brandis plans to repeal section 487(2) of the Environmental Protection and Biodiversity Act and “return (it) to the common law”. His actions follow comments by Prime Minister Tony Abbott and Trade Minister Andrew Robb.

The crux of the Federal Court’s decision on the Carmichael mine was that Environment Minister Greg Hunt breached the Environmental Protection and Biodiversity Conservation (EPBC) Act by failing to consider conservation advice provided by the Department of Environment on the impact of the proposed mine on two vulnerable species – the yakka skink and the ornamental snake.

According to the government, this decision represents a form of illegitimate green “lawfare” by groups that, according to Brandis, “have no legitimate interest other than to prosecute a political vendetta against development and bring massive developments … to a standstill.”

Robb claims this decision could have a negative impact on current free trade agreement negotiations with India. The government’s proposed solution is to tighten the rules for standing under the EPBC Act.

Currently standing is provided for under s 487, which allows for legal action by a “person aggrieved by the decision” and extends the definition of this term to include individuals or organisations that have engaged in “a series of activities related to the protection or conservation of, or research into, the environment” within the two years preceding the decision. It is this extended definition that allowed the Mackay Conservation Group to initiate legal action against the Adani mine and that our government intends to amend.

If this proposed amendment passes, the scope for public interest litigation in defence of the environment will be seriously curtailed in Australia. Furthermore, this restrictive approach would also curtail the rule of law. The Adani case was settled after Hunt conceded he had failed to abide by the law in granting the approval – that is, he rushed it. The judgement merely requires the government to abide by its own laws. Hunt is free to re-approve the mine within weeks.

A revealing contrast to the government’s reaction to this decision is their lack of response to a similar case from earlier this year – Metgasco Limited v Minister for Resources and Energy. In this case, Metgasco successfully challenged the NSW Resources Minister, Anthony Roberts’ decision to cancel Metgasco’s licence to drill at Bentley due to its failure to undertake genuine and effective community consultation. The court found that Roberts had acted outside the law and did not have the power to cancel Metgasco’s licence on non-environmental grounds. 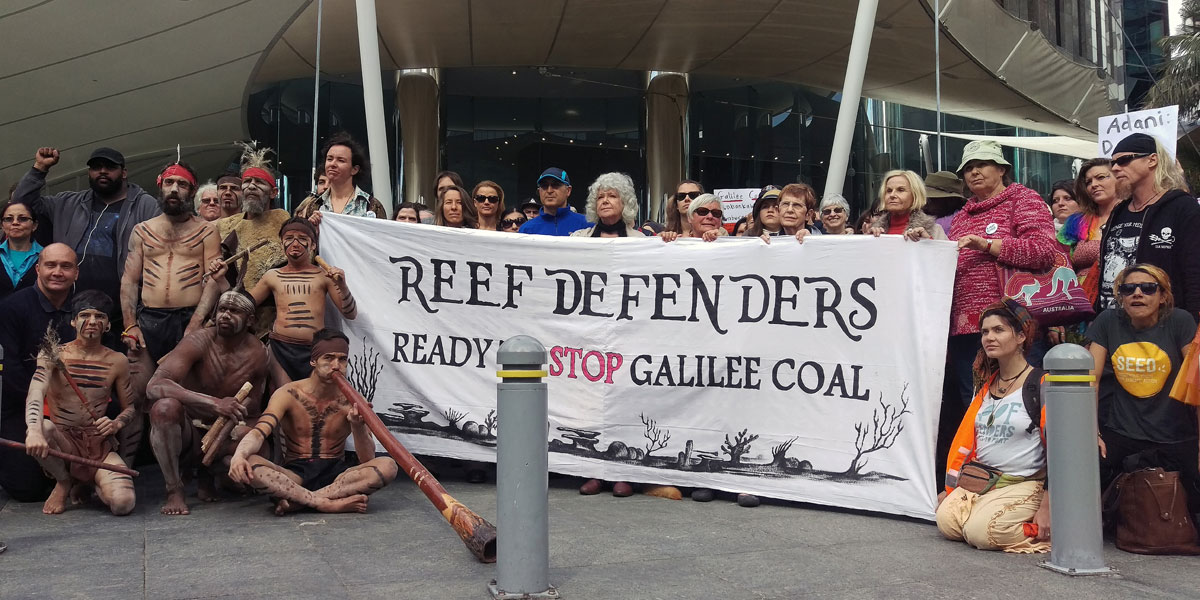 Anti-mining protesters outside mining giant Adani’s offices during a rally in Brisbane in July. AAP image

From its failure to decry the Metgasco decision, we might deduce that the government supports the capacity of mining companies to challenge government decisions, while wishing to deny the same right to community groups. The key difference appears to be the kind of interest these parties have – for one it is financial, for the other it is the public interest in preserving the environment.

Unfortunately, the evidence indicates that the government does not share this interest in preserving the environment. The Guardian reports that only 1.3 per cent of applications under the EPBC Act are refused, with that figure dropping to just 0.4 per cent when it comes to applications from the resources industry. As Greens senator Larissa Waters has argued, “fundamentally, the laws aren’t set up to protect the environment, they are set up to facilitate development”.

Public interest environmental litigation has a long tradition throughout the world. As recently as June, a landmark Dutch case resulted in the government being ordered to cut its carbon emissions by at least 25 per cent within five years. The applicants successfully argued that the government was negligent for “knowingly contributing” to a breach of the two degrees centigrade maximum target for global warming. In the United States, the Sierra Club’s Environmental Law Program also uses public interest litigation to shut down coal-fired plants and mines across the country as part of its Beyond Coal campaign.

The government’s use of the term “lawfare” is inflammatory, but even if it were a correct descriptor it would be a classic David and Goliath battle. If mining companies are free to use their financial clout to both lobby the government and challenge unfavourable decisions in court, while the government itself has a track record of significant bias towards industry, shouldn’t the community also have the right to at least challenge decisions that clearly breach the law?

Cristy Clark is lecturer in law at Southern Cross University.