As Adelaide Airport groaned under the weight of its all-smiling, Abbott-led, business class cargo this week, just a few sandcastles up the road at The Bay the city was turning on one of its best ever Fantasy Island moments.

We are so good at this.

The Holdfast Bay Council is to spend $49,000 on a fly-through video to attract business dollars for a gazillion-dollar revamp of the Glenelg Jetty that it cannot afford.

The grand plan includes extending the jetty, with a luxury hotel and, wait for it, a berth for seaplanes.

Sure, this is the same Glenelg jetty that abandoned plans for a direct ferry to Kangaroo Island a few years back when the waves nearly smashed the vessel to bits against the pylons. But a seaplane? That has to be worth a crack, doesn’t it?

When Tattoo spotted their plane on the horizon, he would ring the island’s bell shouting “Da plane! Da plane!”.

And Mr Roarke, flashing those Montalban pearly whites, would say “Smiles everyone! Smiles!”

Fantasy Island was little more than a sexed up morality tale. While guests paid a small fortune to have their fantasies fulfilled, Mr. Roarke favored a #becarefulwhatyouwishfor approach to the fantasy delivery business.

When the Abbott Cabinet descended for its three-day charm offensive in the guise of a federal Cabinet meeting in Adelaide this week, the word had got out – smiles everyone, smiles.

Gone was the C-word – canoes – and in its place the J-word – jobs. Nary a mention of cost blow-outs and construction delays at the Commonwealth-owned Australian Submarine Corporation.

And the subs? Follow the PM’s words closely here: “Well, the frigates are coming as the first prize and one way or another the subs will be coming as a further prize,” he told our program on Tuesday.

Tuck away the “one way or another” qualifier for the submarines – it is an important one.

Premier Jay Weatherill, however, did not care. He was in full Mr Roarke mode. Smiles everyone! Smiles!

His government, drowning in a sea of unemployment red ink, needs grand symbolic gestures of optimism, and PM Abbott came to town delivering that in spades.

Dollar-for-dollar, Jay Weatherill’s $2 million taxpayer-funded advertising campaign bagging the Abbott Government funding cuts may go down as the best value-for-dollar waste of money ever by any government.

It was dirty, it was shameless and it worked.

While we are yet to see the fine details of the frigate program, while we are already in the ship build’s Valley of Death and while even the Abbott Government’s job projections are restrained – maybe a net increase of 500 across Australia on the current shipbuilding workforce – it stands as a significant policy shift.

The federal Liberals have been seriously spooked not just by the Weatherill attack but the very real threat of Senator Nick Xenophon trashing their SA seats.

ABC election analyst Antony Green rates this threat so highly that he blogged this week that the danger to the Liberals did not come from Xenophon preferences, but primary votes – in other words, winning seats outright.

As the Abbott-Weatherill bromance blossomed during the week, the Marshall Opposition was left smiling through gritted teeth.

In fact, by Wednesday night’s TV news, the Liberal leader had even given up pretending to be happy, quite something for him.

Yet again, the SA Liberals had been tactically outmanoeuvred and outclassed by the Weatherill machine. 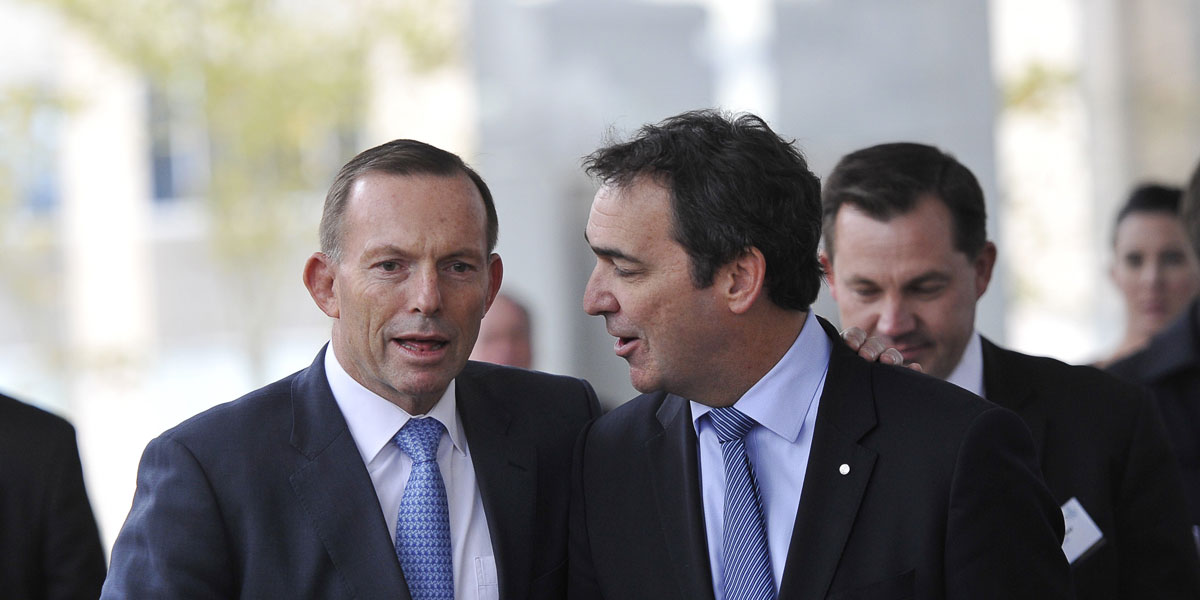 In a bizarre twist, Mr Marshall used the frigates deal to float the boat of one of his frontbenchers Dan van Holst Pellekaan, whom he said had worked tirelessly lobbying for this. Really?

While the Liberal MP for Stuart must be a smart individual, well known and respected in his northern rural seat, in the big smoke Peter Van the Party Man probably has a higher profile than Dan van Holst Pellekaan.

And just who is the deputy Liberal leader? It is Vickie Chapman, but she is hardly Vickie Everywhere, is she? She is a political blue-blood, but lacks the mongrel that Ralph Clarke, Kevin Foley, Michael Atkinson and Patrick Conlon brought to the Rann Opposition frontbench.

One of Steven Marshall’s problems in opposition is that, with the exception of David Pisoni, he does not have a decent junkyard dog hungry for a feed.

While the Marshall Opposition was moaning about the Weatherill Government’s anti-Abbott ads, it took two hard-nosed federal Liberal players – Chris Pyne and Jamie Briggs – to show them how professionals do it. When Briggs called Treasurer Tom Koutsantonis a “lunatic”, he bloodied the Treasurer’s nose.

While Koutsantonis is relaxed facing Marshall, he did not enjoy being snotted by Briggs. A rematch is unlikely.

How many Liberal MPs are awake and firing on the breakfast media menu at 6am? After a session at the gym, coffee and croissants, they all seem to emerge blinking into the daylight around mid-morning, when the first bite at the news agenda has passed them by.

The late Tom Playford had a more innate grasp of the visual power of television – as Premier he leapt onto it when it arrived in Adelaide in 1959 – than the Marshall Opposition.

When they give media conferences, the backdrop is invariably in some nice warm, grey, parliamentary corridor – day after day after day. Boring as bat guano.

Here is some free advice for the Liberals. Adelaide is not Fantasy Island. Try getting off your backsides and doing some interviews outside in the real world, where people are cold, unemployed and worried.