While other industries actively support the mental health of practitioners, the arts is lagging well behind, argues Adelaide writer and filmmaker Andy Porter.

If you thought plain packaging and shock graphics had the tobacco industry fuming, how do you think this new warning – which I suggest be displayed in every theatre, cinema, art gallery, band venue and before every prime time TV talent quest – would go down?

“Warning: A Career in the Arts is a Leading Cause of Mental Illness.”

At the very least, it should be up in lights over every arts training institution in the country.

Why? Well, consider these stats.

Beyond Blue’s ‘Mental Health and Depression in Arts Practitioners’ Paper’ cites US research* indicating that between 59 and 77 per cent of artists, writers and musicians will have met with a mental illness (which is in stark contrast to professionals in the sciences, business and sports where the figure is 18 to 29 per cent).

Meanwhile, Mental Health Australia reports that 75 per cent of mental illnesses first manifest themselves in people under 25 years of age, and, left untreated, may well become chronic illnesses in later life.

So is it wrong to infer from these figures that arts training institutions are reckless incubators for serious and debilitating mental health conditions?

I’m only half in jest here. My research suggests that Australian arts training organisations are ill-prepared if not extremely reluctant to deal with the mental health of their students.

Arts institutions need to step up

Our arts training campuses are the perfect place to help teach budding artists (be they dancers, painters, writers, musicians, filmmakers, etc) the mental and emotional skills needed to maintain a healthy and long-term career in the arts. But this isn’t happening.

“It’s a big job being head of my department that I have to be the therapist too?” replied a prominent Oz arts figure at a national arts training institution. “If they need counselling they should probably do it with professionals. Resilience is something that parents teach their children. You have it or you don’t. And if you don’t have it you learn to acquire it, if you want to continue on in the business.”

Parents aside, how students are to learn these skills is another matter. Because in almost all Australian arts training institutions, mental health awareness and training is not part of the curriculum. Not in any substantial way. Which begs the question: are our art training colleges releasing students largely unprepared to deal with the particular mental stresses and challenges they’ll be up against in their chosen vocation?

Do our art colleges even believe that it’s their role to teach students the mental skills and strategies to successfully handle the adversities inherent in the artistic professions? It’s worth mentioning here that apart from their notable alumni, there’s little follow-up by art training institutions on how the majority of their students have fared over the decades: are they still working professionally in the arts, let alone how is their mental health holding up?

So what are the challenges facing professional art practitioners? According to Paulette Mifsud, founder of Mental Potential: The Performing Arts and Sports Psychology Consultancy, and performance psychologist with the Victorian Institute of Sport, the demands can be relentless.

(Paulette is talking about actors, dancers and musicians but her words apply equally to writers, visual artists, filmmakers and the like).

“Performers usually have a great desire for excellence and they’re under scrutiny on a daily basis. By critics, peers, potential employer. Every performance is a job interview, an audition for their next gig. This creates huge stress. Then there’s the low pay, inconsistent employment, unless they’re the fortunate few to have a long term contract with a company. Frequently they prioritise their mortgage, rent, food above their own wellbeing, above looking after themselves.”

The situation is compounded when they won’t tell their peers of their struggles, out of fear of losing work; of not getting the next gig, the next role, the next commission. So instead of dealing with the problem early in their professions, they risk developing a debilitating career ending injury, physical or psychological, later on.

Dr Mark Seton, of Sydney University’s Theatre and Performance Studies department has a similar take on the precarious life of the arts practitioner. “Some survive, a few survive really well, financially, emotionally and socially. But then there are the artists who do it tough, they’re harder to track and some get caught up in various dysfunctions in term of relationships, marriage breakdowns, various addictions like alcohol, drugs, sex. Workaholism, too, can be a real danger because people who go from job to job, desperate to keep working because they feel financially insecure, can often get tired, have accidents, get injured.”

Or they burn out and quit the arts altogether.

The arts industry isn’t alone in being uber stressful, where the need to excel is ever present: professional sports, law and medicine come to mind. The two big differences here are that these are well paid professions and their respective guilds and associations take an active role in their members’ psychological wellbeing.

The arts lose out on both counts. 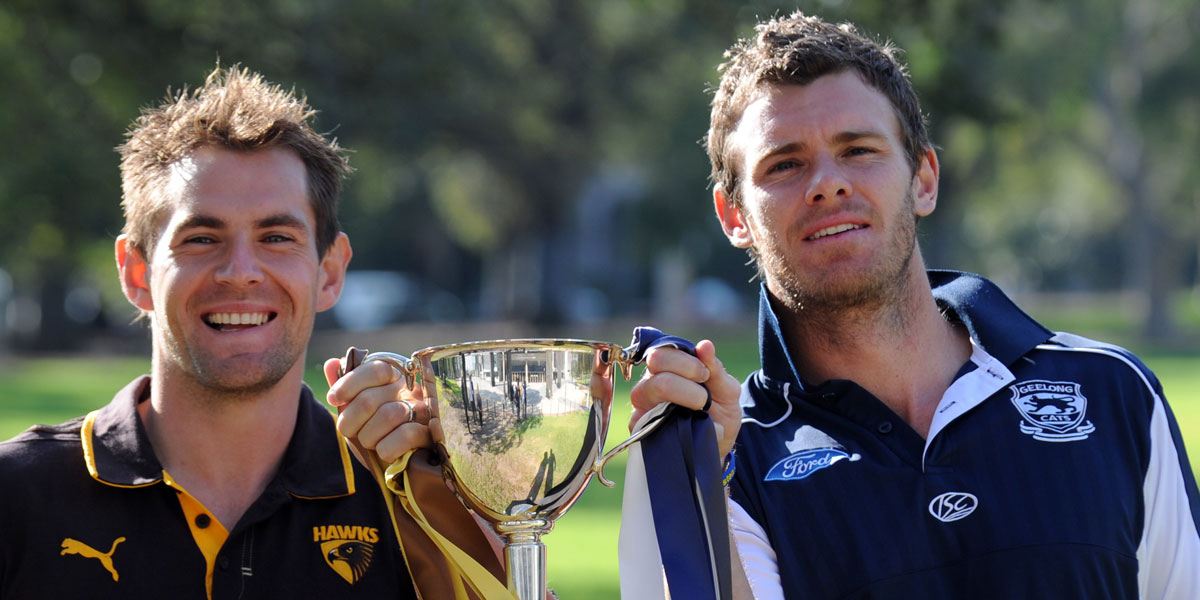 The AFL has been proactive about mental health: this 2010 picture shows Hawthorn’s Luke Hodge and Geelong’s Cameron Mooney with the “Beyond Blue” cup. AAP image

Once out in the industry, it’s up to the individual to oversee their own mental wellbeing. Dance, theatre and opera companies will have masseurs, vocal coaches, and physiotherapists on their payroll to minimise physical injuries, but rarely psychologists to help manage mental health. The Australia Council told me that no company had ever applied to them for funds to engage a psychologist – so the council weren’t able to say either way whether they’d approve such a budget line.

If arts training institutions aren’t equipping their students with the necessary mental skills to survive, what about Headspace, Australia’s national early mental health invention service for young people? Unfortunately, no. Even though research suggests that these students are at a significantly higher risk of experiencing mental health problems later in life, Headspace doesn’t have any programs targeting or tailored to students at arts training institutions. Headspace has indicated that it’s looking at possibly running such programs in the future, but when – or if – this will happen remains a big unknown.

Equally frustrating is how federal and state governments haven’t demonstrated much communication – let alone collaboration and co-ordination – between their arts, health and education portfolios regarding these matters. Contrast this with Australia’s various government-funded sports training institutes, who invest heavily in psychological services and support for their student-athletes.

In these institutions, “performance psychology” is a significant part of the curriculum and recognised as an important element in the continued success of Australian professional sports men and women. Above all, Australian taxpayers are willing to fund these programs.

But not so with the arts.

It’s an imbalance that leaves Australia all the more poorer culturally, given the number of arts practitioners who presumably fall by the wayside and don’t fulfil their potential. If anything, it’s a waste of resources when the cost of their training is taken into account.

Perhaps artists and arts companies – at least the Government supported ones – have a hard enough time already justifying their value for money to the taxpayer, so seeking further government funds to help with the mental health of artists just too big an ask ? (This lack of worth contributes to the chronic low self-esteem many artists feel). Rightly or wrongly, mental health problems are seen as anathema to KPI and productivity figures.

The chicken or the egg?

It has been said that the mental wellbeing of artists is a perplexing mishmash of conflicting theories and truisms. Like the chicken or the egg conundrum: are artists attracted to the arts because of pre-existing mental health issues or is the artistic profession itself that is doing the damage? And then there’s the madness begets genius chestnut; where a high level of mental sensitivity and vulnerability is considered necessary to forge truly original creative expression.

But even these views are contentious, for fear of artists themselves being blamed for mental health problems, and even further alienating artists from the general Australian community.

Ultimately, there’s been so little research or open enquiry into the mental health of writers, actors, dancers, musicians, painters and sculptors that it’s largely a taboo subject in the arts industries.

A ground-breaking exception to this is the recently released ‘Australian Actor’s Wellbeing Study’, by the Equity Foundation of the Media Entertainment & Arts Alliance (MEAA) and Sydney University’s Theatre and Performance Department. The initial findings would be no surprise to industry insiders (the all too familiar problems resulting from low income and high stress, depression levels reportedly double that of the general population, debilitating performance anxiety, relationship breakdowns, drug and alcohol abuse).

No, what’s striking about the study is that the Equity Foundation is throwing the light of day onto these concerns and urging the arts industry to develop strategies to combat these serious problems.

The “if you aren’t tough enough mentally then get out of the game” attitude was ditched by the AFL decades ago (a small army of sports and performance psychologists tend to the league’s players each week). Yet this antiquated and self-defeating mindset still dominates the arts industry. There’s something sadly ironic in that, I think.

I’d go as far as to say that if mental health is the last frontier of Australian workplace occupational health and safety, then the art industries are the Badlands.

Will George Brandis and his National Programme for Excellence in the Arts recognise and back the need for reform here?

Andy Porter is an SA-based freelance writer and filmmaker. His children’s book, Little Chef, Big Curse, was published last year by Scholastic Australia (under the pen name Tilney Cotton), and he is currently in pre-production on a self-funded micro-budget web-series/feature film, Devils Elbow.