Traffic speeds must be reduced to 30km/h in Adelaide’s CBD.

There is no cheaper or more effective way to save lives and reduce injuries.

Australia’s love affair with the car has blinded its people to the worldwide trend of reducing traffic speeds to 30km/h in areas of high pedestrian activity, and on residential streets.

Any mention of the idea attracts vitriol from those who haven’t really thought about it very much.

But the benefits of reduced traffic speed are far greater than any perceived inconvenience to drivers.

A common myth is that it will take longer to get around. This is false.

Lower speeds in built-up areas can increase road capacity by reducing the stop/start at intersections, which improves traffic flow.

A speed limit of 30km/h in built-up areas strikes the necessary balance between traffic circulation and people walking, cycling, dining, working and shopping.

It should be enforced not only in Adelaide’s CBD, but in many areas of high pedestrian activity.

This can include short sections of major roads such as the hearts of Unley Road, Goodwood Road, Norwood Parade, Prospect Road, Henley Beach Road and Queen Street.

It didn’t take long for motorists to get used to 50km/h, and now the thought of hurtling down Grenfell Street at 60km/h just seems ridiculous.

Moreover, people who walk and cycle should be celebrated for reducing pollution, noise and traffic congestion, as well as making the city a whole lot more interesting to be in. Instead, they are deemed a cause of frustration to motorists for slowing down their trip by a few seconds.

The key is to find a balance.

Cars were invented to get us from A to B quicker, but the act of driving cars has made us impatient. We’ve developed a demand for instant results, forgetting that the car can also be a lethal weapon.

Impatience for the sake of a minute or two can have dire consequences.

Of course, there are places where higher traffic speeds are a priority, such as arterial roads and long-distance links, but not in areas where people are living, working, playing, dining or shopping.

Under the “Safe System Approach to Road Safety” (a strategy adopted by all Australian states), it is unacceptable to trade off human life and health for other benefits of the transport system.

“Achieving a Safe System of road travel is based on an understanding that the human body is vulnerable and unlikely to survive an un-cushioned impact at a speed of more than 30km/h.” – NSW Centre for Road Safety. 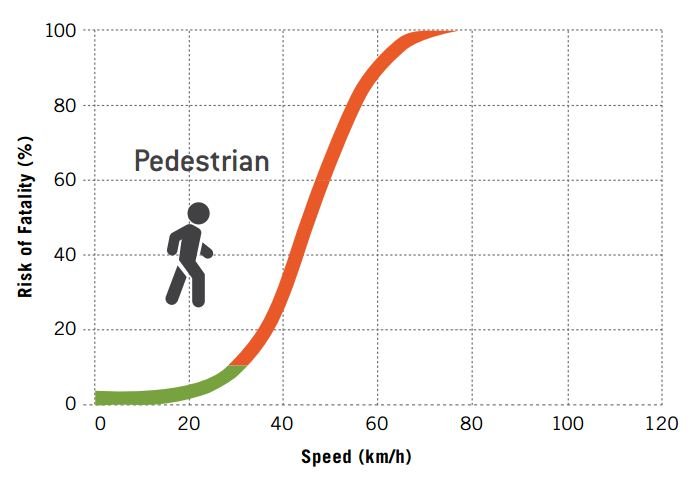 The change in speed limits we’ve already made – from 60km/h to 50km/h in 2003 – has resulted in significantly fewer fatalities in the Adelaide CBD.

During the five-year period before the 50km/h introduction (1998-2002), there was a total of 419 pedestrian injuries (four fatalities and 90 serious injuries).

It didn’t take long for motorists to get used to 50km/h, and now the thought of hurtling down Grenfell Street at 60km/h just seems ridiculous.

Internationally, 30km/h zones (and their non-metric system equivalents) are proliferating in cities all over Europe, and more countries are rolling it out each year; most recently, Canada.

Slower streets which are safer encourage more people to walk and cycle, which means fewer cars on the roads.

Planners and policy-makers have known that cycling and walking are legitimate forms of transport for a long time now, particularly for short distances.

These travel modes are sustainable, healthy, non-polluting and inexpensive, and this form of incidental exercise can have huge impacts to lowering obesity rates in Australia.

Indeed, replacing short car trips by cycling or walking will assist in the success of population growth.

But this knowledge is not dripping down from policy-makers to impatient motorists hanging onto the false myths.