Mark Ward is an unlikely Labor hero, and an even less likely member for Davenport.

He’s billed as a “local schoolteacher”, which is true in the sense that he is both local and a schoolteacher, though he has never taught in the Davenport electorate.

He does have one significant impediment to victory, albeit one shared by his Liberal opponent Sam Duluk: his surname is not ‘Evans’.

This will be the first Evans-less poll in Davenport for 30 years. Between Iain and his Dad Stan, the seat has fostered the closest thing to a political dynasty in South Australia since the Downers or, indeed, the Chapmans – the Capulets to their Montagues.

Furthermore, fourth term governments (of any hue) are not wont to win elections; in the normal order of things, they lose them diabolically. At least until last month’s poll in neighbouring Fisher.

But if Ward is to shrug off history, his underdog status and his sans-Evans moniker, you can guarantee nothing so certain as that the Premier will anoint him the ALP’s newest “hero”.

Labor loves heroes. And, evidently, to qualify for the coveted status you don’t really need to accomplish much in office (there wouldn’t be too many heroes about if that was the prerequisite!); all you need to do is win a seat you weren’t expected to win. Or to win one by a big margin. Or to almost win one. If you win one that makes the difference between Government and Opposition (or minority and majority Government), that helps too.

Mike Rann declared Tom Kenyon a “Labor hero” on election night, 2010. Like many a Labor hero, Tom was careful not to let the accolade go to his head, demonstrating his unaffected air by shuffling around the ensuing celebrations wearing a Monty Python “Spam” T-shirt, before leaping to the stage and screaming “We f***ed ‘em!” to the assembled true believers. One presumes he was referring to the Libs, rather than the voters.

Weatherill, naturally, declared Nat Cook a Labor hero on the night of the Fisher by-election, even though at that point she hadn’t actually won the seat (she would later fall a rather un-heroic 17 votes behind the Liberals as counting continued mid-week before heroically rallying again.)

But if Labor has cause to anoint another in its burgeoning gaggle of heroes tomorrow night, it should perhaps not be one of its own. There is precedent: non-Labor Labor heroes include maverick conservative Peter Lewis (briefly), Port Pirie independent Geoff Brock (currently) and disaffected former Liberal leader Martin Hamilton-Smith (vaguely).

But if Labor again shrugs off the heavy weight of history to snatch Davenport, Jay Weatherill should be thanking Tony Abbott.

If there was a Federal Government more wilfully – even joyously – ignorant to its electoral responsibility to its state colleagues, it’s not in living memory. Then-Defence Minister David Johnston’s jibe about the Government’s own shipbuilder ASC’s inability to build a canoe was timed to perfection, three days before a Victorian state election, and a week and a half before a by-election in SA that Weatherill had already determined should be fought on the future of shipbuilding.

As an added slap to the ousted Napthine administration, Abbott waited until the election was lost to backflip on a raft of contentious policy that had dragged the Liberal brand into the political mire for successive months. Thanks Tone!

But this week is his masterstroke.

There was nothing particularly contentious or diabolically stupid on the national agenda a week out from the Davenport poll in SA and a knife-edge state election in Queensland. So he simply made one up. 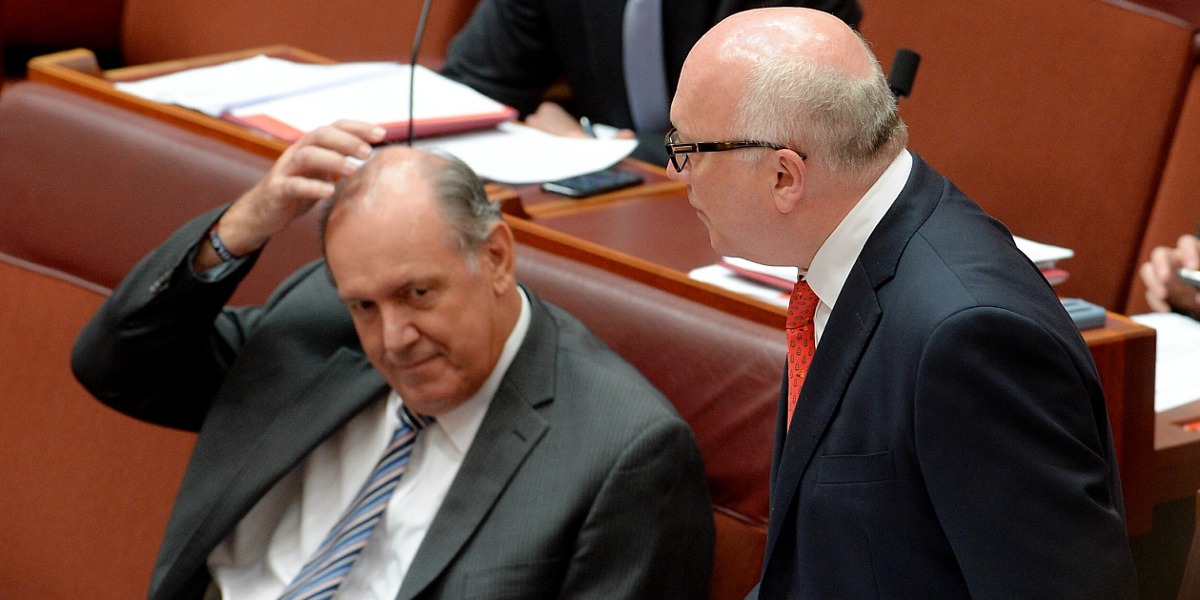 The fact that he acted more or less unilaterally is testament to his acute political acumen and flawless judgement. It’s as if he was sitting around on Sunday night thinking: “What can I do that will simultaneously disenfranchise most mainstream Liberals while outraging everyone else? I know! I’ll give an Australian knighthood to a foppish English royal who once asked a Queensland indigenous elder whether his people still throw spears at each other!”

When, as a Liberal PM, you manage to spur not one but two state Liberal leaders to publicly question your judgement a week out from elections in their respective states, you’ve achieved something rare in politics. It was, at least, a complete vindication of Queensland Premier Campbell Newman’s earlier rejoinder that “we don’t need to bring in someone (from Canberra) to hold our hand and prop us up”.

Mark Ward may be an unlikely Labor hero, but no less likely than the serving Liberal Prime Minister of Australia. And if Labor steals a win tomorrow, both can take their share of the credit.

Tom Richardson is a senior journalist at InDaily.

His political column appears on Fridays.