Frome Street – the street that wasn’t, and probably never should have been – demonstrates more about Adelaide’s flawed transport and planning policies than any other of the city’s wide boulevards.

Many Adelaideans are unaware that the street wasn’t on Colonel Light’s plan – it is a late 20th-century addition; a partially-completed road to nowhere.

Amazingly to modern heritage sensibilities, it was carved out of a couple of tiny lanes, with historic buildings and workers’ cottages destroyed to make way for a wide boulevard that was to be part of a grand north-south arterial right through the guts of the city and North Adelaide.

And it would have been huge. Think of the car rental place on the corner of North Terrace and Frome Street – that’s how wide the thoroughfare was to have been, with the council buying up numerous properties in North Adelaide and the city.

The wrecking ball’s path ceased at Carrington Street, after concerns were raised by many, including academic Hugh Stretton. In the 1970s, Premier Don Dunstan stepped in to city planning to put an end to the destruction.

Today, Frome Street is again attracting controversy, due to the Adelaide City Council’s plan to introduce separated bike lanes in both directions down its length.

Work is nearing completion on the southern section, which knocks out two “regular” lanes, much to the annoyance of Adelaide’s hordes of car lovers. The council plans to complete the separated bike lanes through to North Terrace, with a number of engineering options on the table.

However, if you are worried about the place of precious cars in Frome Street after the bike lanes are installed, you’re in for an even bigger nightmare.

The street is also earmarked to accommodate a portion of the city tram loop, outlined in the State Government’s integrated transport plan, released last year. The loop is on the short- to medium-term priority list.

So, if the tram loop is built, Frome Street will become, realistically, a no-go zone for motor vehicles. Technically, cars would still be able to use the street, but anyone wanting to avoid delays would take another route.

Cue wailing and gnashing of teeth.

But Frome Street’s travails reveal bigger issues about our approach to transport planning. Here’s my assessment of what they are. 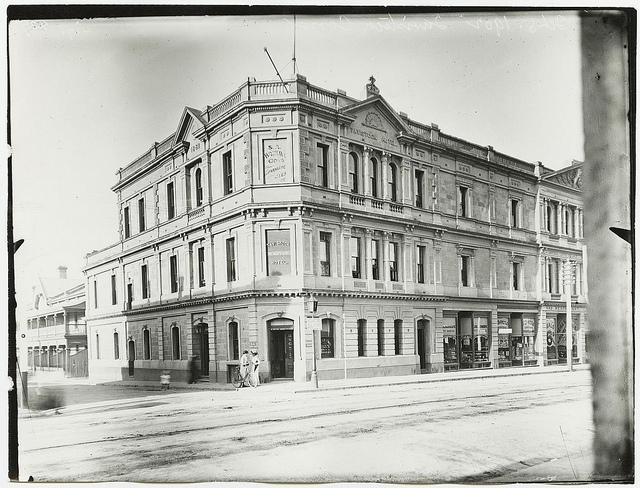 The grand Tavistock Hotel, on the corner of Rundle Street, was demolished to make way for Frome Street. Photo: State Library

The Adelaide City Council has been given a public thrashing for its bike lane project. After the debacle of Sturt Street’s “Copenhagen-style” bike lanes – since removed – this is perhaps understandable.

However, few commentators or reports have pointed out the fact that the bike lanes will connect with a north-south bike corridor through the city which is virtually complete. It is the treadly version of the grand north-south motor vehicle route.

The council makes the reasonable point that there are 29 north-south traffic lanes in the city – until now, they have all been devoted to vehicular traffic. Is it ridiculous and a joke (as one commentator put it), to devote just two of these lanes to bicycles?

Tellingly, perhaps ironically, it was our car obsession that led to the post-war push to create Frome Street.

As current councillor Dr Michael Llewellyn-Smith points out in his illuminating book on Adelaide’s planning system, Behind the Scenes: The Politics of Planning Adelaide, town clerk Bill Veale came up with the idea to connect Main North Road with Glen Osmond Road to reduce congestion in King William Street.

The plan involved purchasing large amounts of real estate and would have effectively sliced the city asunder.

The council did indeed start to implement the plan, and by 1962 two narrow streets, Tavistock and Ackland, had been widened into what we know now as Frome Street. Workers’ cottages and the historic Tavistock Hotel were among the buildings demolished to accommodate the plan.

Standing with Llewellyn-Smith on Rundle Street, I ask him what would have happened to this picturesque part of the city if it had, essentially, a major arterial running through it.

“None of this would be here,” he says, looking around at the shops, cafes, pubs and pedestrians.

The later MATS plan – eventually canned by Dunstan, along with the planned southward path of Frome Street – approved of the north-south throughway concept, as well as other, frankly, insane ideas which would have destroyed some of our inner-city character suburbs in favour of arterial roads and interchanges.

Today we continue to believe we can cope with any amount of growth in motor vehicle numbers by building new and better roads.

You don’t need to be a traffic engineer or a mathematician to realise that strategy has its limits. A congestion crunch is coming.

Therefore, Adelaide has the worst public transport in Australia

Our obsession with cars means that our public transport system is arguably the worst of any major Australian city.

The light rail system is tiny and expensive, heavy rail covers a very small proportion of the greater city area, and buses are unreliable and too infrequent to attract patronage growth.

Overall patronage is trending down, in contrast to the trends in every other major Australian city.

The worse the public transport gets, the more likely we are to stay in love with our cars.

Will we see trams down Frome Street as part of a city loop? Don’t hold your breath.

It seems almost incomprehensible that we, as a community, managed to plough a major road straight through an historic part of town before changing our minds.

Llewellyn-Smith’s book points out that after Dunstan put an end to Frome Street’s progress, an architectural competition was held to design a housing project. That project was built smack-bang at the end of Frome Street as a way to discourage any future attempt to restore the grand north-south plan.

Then there’s the point that the tram route and the bike lanes are to be put on the same small stretch of road.

Did the council and the government speak to each other? The council says it did take into account the tram idea. The Government says: “Adelaide City Council’s planned changes for Frome Street would not preclude its use as a future site for trams”.

The council is a lone voice

There is only one prominent voice in South Australia that attempts to argue for a decent mix of transport options on the road – and that is Lord Mayor Stephen Yarwood.

However, he doesn’t control public transport, nor any of the feeder routes into and out of the city.

While every other major city is building cycling infrastructure and improving public transport, only Adelaide resists fiercely any attempt to provide room on the road for alternatives to private motor vehicles.

So often the public advocate for these issues is Yarwood, who is routinely pilloried for his attempts to have a more sophisticated debate on transport.

Yet, he’s not unusual among city mayors in advocating for alternative transport.

In Melbourne, the major through road – Swanston Street – is closed to motor vehicle traffic in four zones. There are trams and separated cycle lanes along its length. The council and the State Government both state openly that they want to discourage people from driving into the city.

The world hasn’t come to an end, and Melbourne’s city centre is thriving. Studies have shown a huge increase in foot traffic on Swanston Street, along with an increase in café businesses and others.

Who knows? The change to Frome Street might turn it into a people-friendly, thriving boulevard.

The State Government is to be commended for producing an integrated transport plan – including detailed plans for public transport, walking and cycling – but its voice is muted in the debate due to ongoing political problems relating to public transport performance.

Why can’t the government and the council work together and jointly advocate solutions? It’s a reasonable question.

Yarwood’s critics should put their alternative policy initiatives on the table.

How do they plan to cope with congestion as more and more cars hit our roads? Build more roads? Where? How will that be funded? Is it sustainable from an engineering or heritage perspective?

If this is their prescription, I suggest critics of the bike lanes should be honest about the consequences of their head-in-the-sand approach.

They should have the courage to promote a completion of the Frome Street freeway, ploughing straight through the residential south-east corner of the city and the parklands. While they’re at it, why don’t they also resurrect the plan for the northern part of the route, with a major thoroughfare along a widened Le Fevre Terrace and an overpass on Melbourne Street? Sure, we’ll lose some architectural treasures, but at least we’ll be able to drive our cars in peace.

While we’re at it, we could also resurrect the MATS plan in all its glory, including interchanges and ring routes wiping out heritage houses in suburbs like Dulwich.

Alternatively, we can build better public transport and encourage more people to cycle and walk.

Which would you prefer?