“Everyone seems to think the Greeks and Romans used clay as a container to age wines,” John Ullinger says, reflecting on the current amphora fad among winemakers.

“They can’t have used clay to age wine, or store it for any great time. It was just too porous. I’m informed by the ancients, but if they were here today, and saw our technology, they’d fire everything at a higher temperature. They couldn’t get their kilns hot enough to get clay to glaze properly and seal.

“This current fascination in amphora intrigues me. If you go and buy yourself a real one, after the style of the ancients, to prevent it from leaking you’d have to seal it with resin or wax, which seems to defeat the purpose of using natural clay. If the Romans or the Phoenicians had our kiln technology, they’d be glazing those surfaces at higher temperatures and they’d discover that everything would keep better.”

John is a potter. We’ve been mates for decades. He did what he calls “a typical standard arts/crafts/design degree” at the University of South Australia, where he says they taught some basic geology about clays and their sources. But “most people never use that stuff; that knowledge”, he says.

John’s determined to use his. He went off and did his masters at Stoke-on-Trent, which he says gave him “a full-on industrial ceramic design qualification”. He was clearly thinking industrially when he rang me a year ago to ask whether there was any clay on the Yangarra vineyard (where I rent a small flat). He said he was amused at the thought of the modern wine business suddenly copying an ancient imperfect container, which he knew he could easily improve.

He liked my suggestion that once the Romans invaded Gaul, and discovered that the canny woodworking Celts had invented the oak barrel, it didn’t take long for the brittle, leaky clay to disappear. What wasn’t on the bottom of the Mediterranean soon became builders’ landfill at the Coliseum or terra-cotta road metal.

“Like in the name of getting back to nature, what’s the point of going for something as natural and tricky as clay, and then having to seal it with a contaminant like beeswax or pine resin so it doesn’t leak, which in turn means the wine has no contact with the clay?” he asks.

“The industrial scientist in me says this is the pursuit of nature for the sake of it, and then not going the whole hog because it doesn’t work very well … that’s all marketing.

“Perhaps it’s more the artist in me that started this thinking, but really I’d like to see what happens if you ferment a wine in an amphora made from the same ground the vines grew in.”

This was revolutionary thinking.

When I told him that, yes, Yangarra has plenty of clay, he was down here in a flash, taking samples. Buckets of it, from different parts of the big vineyard. Manager and chief winemaker Peter Fraser was right into the idea, as he was already trialling modern commercial “egg” fermenters in place of steel or oak, and spectacularly with Roussanne. The stoic and bemused vineyard genius Michael Lane suddenly found himself making large mud pies with the back hoe. 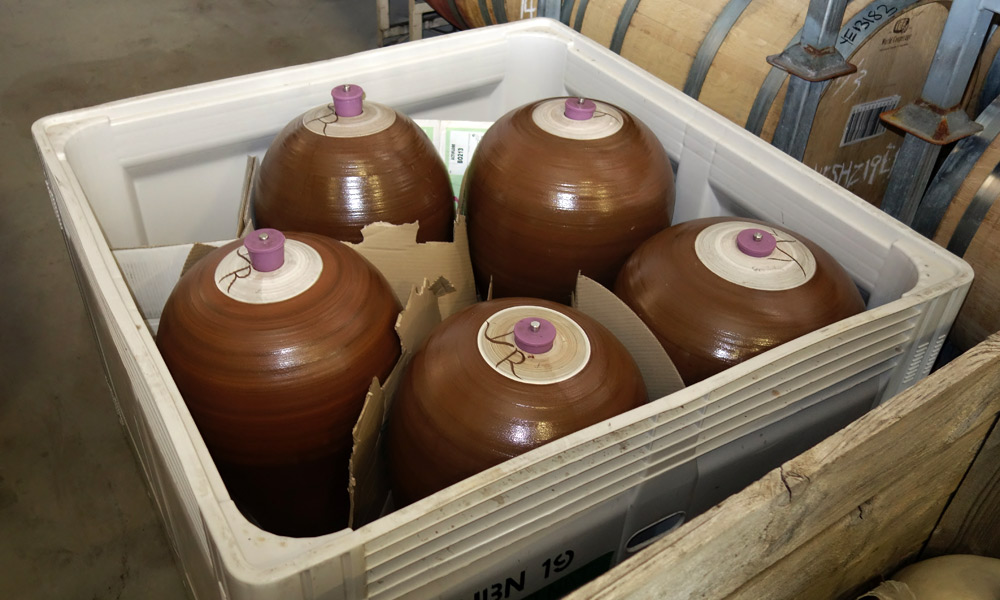 After many trials of breaking, soaking and settling the clays to fine them, and lots of experimental kiln work and research into the varying compositions of samples from the vineyard’s different geologies, John returned with a set of 30-50-litre clay pots. As not all the vineyard clays were suitable for casting big pots, some were made from a blend of the vineyard ground with a neutral industrial amalgam clay. What some would call a “pure” clay.

Fascinated first with the notion of really testing the relationship between the actual flavours of the clay and the wine fermented in it, without leakage, John is making pots of varying compositions, with different levels of organics, silica and iron, depending on the clay source. And he’s glazing them on the outside, not the other way around. As it ferments, the wine soaks into the same ground it grew in.

“Only the Georgians of Caucasia mastered the leaky old amphora,” he explains, “because they bury them for years with the wine inside.

“By accident, by trial and error, they eventually discovered that the best ones are the ones buried in moist ground. The moisture outside the amphora – often in clay, incidentally – keeps the oxygen out and slows leakage.  In that instance, there’s less need to glaze anything. They took  advantage of the occurrence of much lower oxidation without really understanding what’s actually happening.”

John is determined to drive the old-fashioned thing about natural ferments a lot further into the future by applying some modern refractory science. That won’t go astray. I smell a PhD in the oven.

He can make these containers quite large, if required – depending on the ground mined to make them, he thinks barrel-sized (even barrel-shaped) clays are feasible. So far the trial jugs have been small enough to manhandle.

“The initial test batch of smaller vessels held approximately 20 litres and specifically were a porosity test,” he says.

“Some of them were later refired to be less porous as we decided what to do. The higher porosity vessels, which could be compared to ancient ceramic, sweated water copiously and were not suitable containers for the storage of expensive wine.  Porous vessels may have a role to play in maceration where you want to have it breathing, but there’s a lot more research required there.

“Now, the larger vessels are approximately 50 litres and the South Australian terracotta clay is high fired to what potters consider its maturity and is clear glazed on the outside. Very generally, the ceramic is a low-porosity red stoneware with site-specific soil added to the clay.

“Even with small additions of soil from the Yangarra Rousanne and Grenache selections, these produce subtle but perceptible changes in the colour and texture of the clay. You can see it in the tasting vessels. How this will play out in the wine, only time will tell. Exciting times!”

Exciting? You bet exciting. By tasting vessels, John refers to his beautiful wine cups and decanting jug, which look pretty much like they belong on the table at the last supper. His idea was that each wine should be best drunk from a cup made from the ground it grew in. 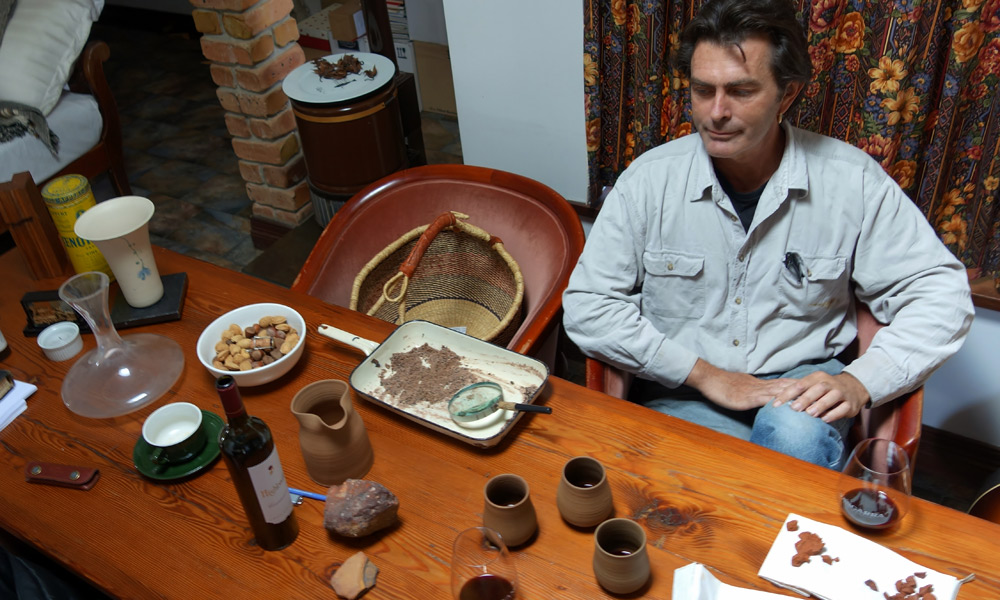 What nobody forecast was the incredible difference the various grounds make to wine – any wine.

We are now playing with the way the same wine changes dramatically in gustatory profile if consumed from copper, pewter, stainless steel, Ironheart ground or High Sands, or the alluvial clays overlying the Kurrajong rubble under the Roussanne.

Mystified by the range of potential reasons for the way different clays influence the flavour of the same wine, we are now screwing around with lots of theories about ion-exchange, surface area, iron and oxidation, and Bacchus only knows what not.

I can guarantee one remarkable fact: the drinking cup made with ground from the Roussanne vineyard immediately softens sappy or leafy wines, imparting mellow autumnal-rustic leather and dark charcuterie meat characters in both aroma and flavour, almost immediately upon pouring.

In other words, it seems to add instant years to red, without the wine losing its life or vivacity. Leafy, wood-sappy baby American oak Cabernet, for example, is immediately much more rounded, pleasurable and approachable, velvety and luxurious. The new Grange just loved the clay; the old Coonawarra Cabernet I’m trying right now doesn’t need it – it’s much better in the chill sanitation of glass.

And as for the Yangarra wines?

Just for the moment, we’ll call that an industrial secret between John Ullinger and Peter Fraser. Me?  I know nuuuuuthing.