Everyone makes fun of media training, but it does have its uses.

One tip that should be on every politician’s training schedule is this: when standing behind a colleague being filmed keep a straight face. A very straight face.

Exhibit one – Premier Jay Weatherill behind Minister Tom Koutsantonis this week (could be worse – looks bored):

And then Kouts returns the favour (with interest):

And then there’s this classic moment from Don Farrell back in 2012 (nice try at neutrality, but, yeah, didn’t work):

But nothing is likely to beat this moment from Labor MP Alan Sibbons yesterday (with much gratitude to the ABC and its political reporter Nick Harmsen for posting the link on Twitter).

Last week we wrongly suggested that Alexander Downer was about to get a “job for the boy”, becoming ambassador in Washington, just a hop step and a jump from buddy Nick Minchin, who’ll be Australia’s representative in New York.

He is getting a job for a boy, but, if you believe sundry interstate hacks, as our diplomatic honcho in London, not Washington (although our word is he pushed hard for the job in DC).

He’ll be replacing our very own Mike Rann, who’s supposedly being shunted to Italy.

Tough news for Ranny. It might also put an end to the rumours that Steven Marshall – if elected – wants to appoint Downer as the next SA Governor.

So many jobs for just one boy!

It’s been described as the world’s most expensive skate park (well … it has now!).

The $30 million upgrade of Victoria Square doesn’t look much like the fly-through – and the neat paved paths and concrete steps have attracted few people, apart from a regular bevy of skater boyz and girlz.

Go take a look – you can’t move for all the “boarders” pulling off “sick” or sometimes “sketchy” moves (thanks Skateboard Slang!).

Hang on to your hats and gird your loins: mixed metaphor alert.

With Labor slipping around the electoral ice like Outback kids on skates, the Liberals must be desperately hoping that no-one notices how wafer-thin their policy promises have become.

Take this week’s gem, announced by media release: “The South Australian Liberal Party has crafted a targeted Agribusiness, Food and Wine plan to reverse 12 years of disastrous neglect of the agricultural sector under successive Labor Governments.”

However, when you open the “plan” you find a nine-page brochure (including lots of colourful pics) and a few thought bubbles.

When you get to the final page you realise that what they’ve crafted isn’t actually a “plan” as such, but rather a “plan to plan”.

They even ask for help from the public, the lazy sods.

“If you would like to have your say on our plan for an Agribusiness, Food and Wine Bicentenary Plan, please get in touch.”

The question is: when did they first start planning to release a plan to plan?

Appropriately for the Athens of the South, everyone has an artistic opinion about the upcoming Fringe show “Come Heckle Christ”.

Local councils, who have absolutely no responsibility for Fringe shows in the city, have been busy passing motions condemning the previously boutique – and now, thanks to the publicity, blockbuster – show.

Marion Council managed to avoid a motion which would have seen Fringe shows in the council area cancelled, amending it to a statement of condemnation. Port Adelaide Enfield also got in on the action with a condemnatory motion of their very own.

So little time; so many passed motions.

The most illogical response belongs to Fred Nile’s political party which posted the photo below on Facebook along with this comment: “God does move in mysterious ways. The latest scene from the Adelaide Fringe festival, which is showcasing the hateful ‘Come Heckle Jesus’ show.

“Be not deceived; God is not mocked: for whatsoever a man soweth, that shall he also reap.” 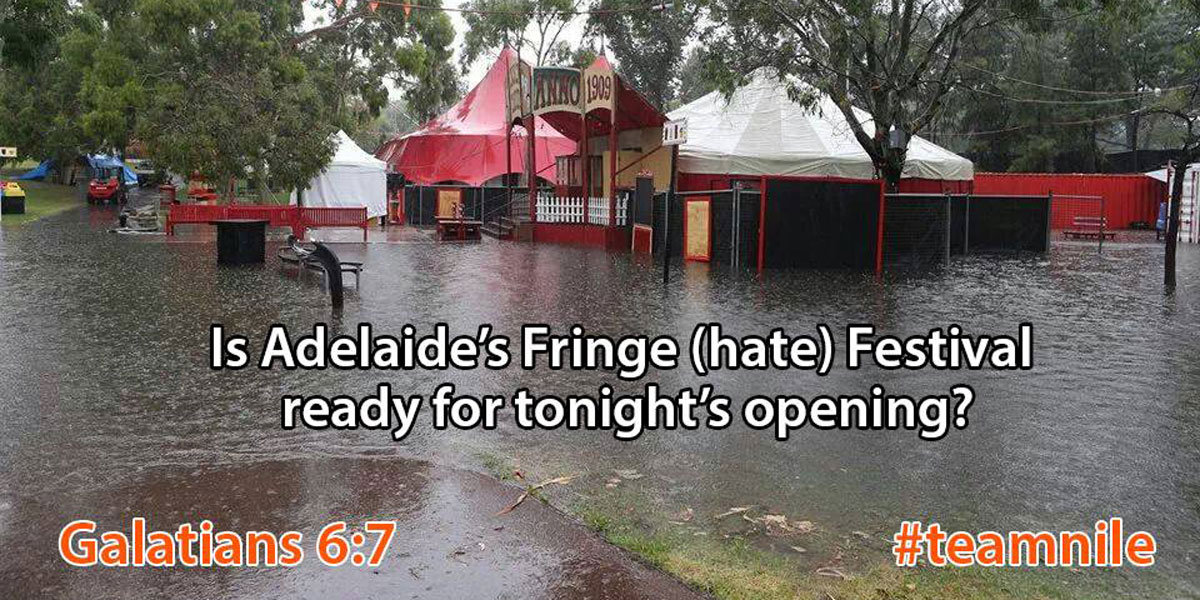 Despite the fact that the show in question doesn’t start until this week (and is indoors), the rains that briefly flooded the Fringe’s Garden of Unearthly Delights also extinguished, finally, the Bangor bushfire.

As one visitor to Fred’s Facebook page noted, poignantly: “Please God, send your rain to us in gippsland, help us put these bloody fire’s out!!”