Dozens of sharks have reportedly been caught since Western Australia’s “catch-and-kill” drum line program began two weeks ago. Firm numbers are not available given the WA government’s unwillingness to release figures and scientists are relying instead on observations from the public and tweets from Surf Life Saving WA. Reports from media, conservation groups and surf life saving suggest up to ten sharks have been killed, either by shooting or drowning.

All captured animals so far are reportedly tiger sharks, with white and bull sharks also targeted by the program. While the program was designed to reduce the risk of fatal shark attacks, it also poses a threat to shark populations.

Endangered sharks, across the world

Sharks are in trouble across the world. A recent global analysis on the status of all sharks and rays found that their overall extinction risk is high, with only one-third of species considered safe. This is in large part due to over-fishing.

This should worry us because sharks are the ocean’s equivalent of lions and tigers. Known as “apex predators”, these animals play a key ecological role in maintaining healthy oceans.

To reduce the risk of fatal shark attacks, the Western Australian government will kill all sharks over three metres caught on baited drum lines.

But three metres is also an important size for sharks. Animals greater than three metres are likely reproductively mature animals. If these animals are killed, it could damage the reproductive capability of the population. In fact, the program is a direct contrast to 2010/2011 WA fisheries policy that protects breeding stock.

Sharks are a diverse group of wildlife and understanding their biology and ecology is important to their conservation.

White sharks (also known as great whites or white pointers) have been implicated in a number of attacks in Australia’s southwest. Found in marine environments ranging from the tropics to cool temperate zones, they can be semi-permanent residents in coastal waters. Tagging data show that they also undergo very long migrations across the open ocean.

White sharks are listed as Vulnerable under the IUCN Red List and protected in Australia.

The reason is their reproductive behaviour. White sharks are slow-growing and can live for over 70 years, reaching sexual maturity at 17 years. When they reach maturity they are around 4.8 metres in length.

Consequently, white sharks reproduce very slowly, with females giving birth to between two and 10 very large pups — between 1.1 and 1.7 metres — every 2-3 years.

This means that white shark numbers also increase only slowly, and are very vulnerable to over-exploitation. Where data exist, most estimates suggest white sharks are decreasing. And while accurate estimates are difficult, genetic work suggest that there may be as few as 700 breeding individuals in southwestern Australia.

Despite never being implicated in a fatality off the coasts of Perth or the southwest, tiger sharks are also targeted by the WA drum line program, and appear to be comprising the bulk of the catch.

Like many other large sharks, tiger sharks undertake long coastal and oceanic migrations.

Growing to a maximum of about 4.5 metres, they can live to 50 years and are reproductively mature when 2.5-3.5 metres in length at 4-11 years of age. Tiger sharks produce relatively large litters, typically between 30 and 35 pups every 2 years.

Although these relatively rapid rates of reproduction mean that tiger sharks are more resilient to exploitation than white sharks, they are listed as “Near Threatened” on the IUCN Redlist. This is largely due to commercial fishing and by-catch driven by finning for shark-fin soup.

Bull sharks are the smallest of the three sharks, growing to 3.6 metres long. They are found globally in tropical and warm temperate waters but sometimes move into cool temperate environments on a seasonal basis.

Bull sharks can live for 30 years, maturing at 15 years and 1.9 metres long. They have litters of about six pups, probably once every two years. Genetics suggest that female bull sharks return to same estuary to breed.

Adults are typically found on the shelf in shallow coastal and estuarine waters less than 30 metres in depth. Unusually for a shark, they also travel into fresh water and can be found long distances up rivers and in freshwater lakes and canals connected to the sea.

Because estuaries often border sites of urban development and are a focus for industry, the species is threatened by habitat loss as well as being targeted by both recreational and commercial fishers. They are listed as “Near Threatened” on the IUCN Redlist. 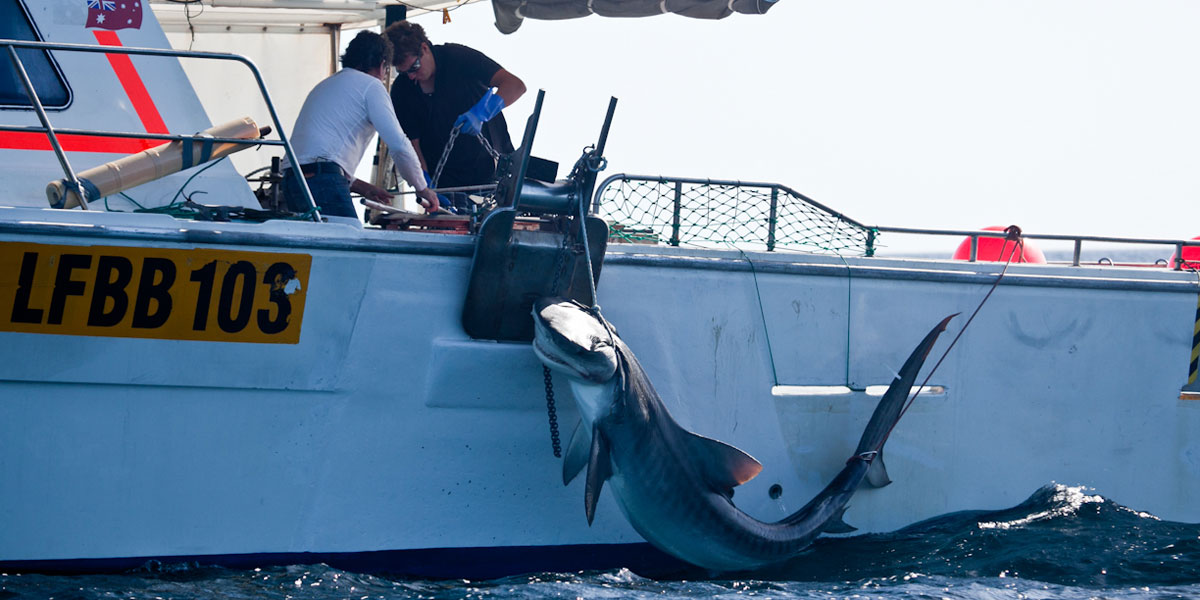 The danger to these animals and undersize sharks lies in setting drum lines for extended periods of time. If the lines are not checked regularly, non-target wildlife may be dead on the line or seriously compromised, rather than being released as intended.

We need to implement non-lethal approaches that improve ocean safety such as tagging and removing sharks further out to sea or better beach behaviour.

Jessica Meeuwig is Professor & Director of the Centre for Marine Futures at the University of Western Australia.