With the solemn approach of his birthday, it is utterly appropriate to ponder the technique used by the most famous winemaker in history (apart from, perhaps, Maynard James Keenan). But it is indeed belated attention: humans have been thorough at mimicking, marketing and channelling carefully selected or totally perverted aspects of the life of Christ, but for some dumb reason, everybody forgets his winemaking.

Given its current parlous state, the Australian wine business could learn a lot from a little scripture.

What a pity the James Hallidays of the day hit the cutting-room floor during the haphazard and scandalous assemblage of the scriptures!  As it turns out, only one of the gospel writers, John, managed to squeeze the first miracle into his book.  Matthew, Mark and Luke make no mention of it.  Maybe they didn’t get to the wedding.  Maybe they had so much to drink that they forgot the details, or lost their tasting notes.  Unless, of course, some savage proho dry editor simply removed the good bits of their accounts to prevent too much in the way of fun going down at every wedding since.

As its stands, John’s account leaves a fair bit to be desired.  He seems more interested in the way Christ rebukes his Mum.  The lads have been partying on the beach at Galilee.  Clambake, skinsful of fresh Damascus rosé, Mary of Magdalene dancing in the sand in the moonlight.  The Lord must have itched in those moments to make his first miracle the invention of the ghetto blaster. But he held off.  In the morning, he must have dryly thought of inventing the blue electrolytic hangover drink and the portable fridge, but again he held off, true to his determined sadomasochistic edge.

Imagine them. Waking, sandy and groaning in the bright sunshine, reaching for fresh water which isn’t there.  Christ reminds them they’re two days late for the wedding his Mum insisted they attend, so, you get the picture.  A ratty hungover procession up the dusty mountain track to Qana and there she is, akimbo in the road, hissing about them being so late that the wine had all run out and, according to the Jewish tradition, there were still four full days of partying to go.

Regular readers will recall my theory that as a famous winebibber, and friend of publicans and sinners, Christ would have been fluent in the latest winemaking techniques introduced by the occupying forces. The boundaries of the Roman empire were always determined by the edge of viable viniculture, as any self-respecting Italian soldier would refuse to march without his wineskin. And as the Son of God had refused to invent the fridge, the matter of keeping wine fresh was a bother.

As it was, they drank it wild and young and fizzy.  Thus the line about not putting new wine in old bottles.  The bottles were wine skins, bags without boxes, which would burst if the wine in them underwent a secondary ferment.

Back at headquarters, in Rome, the peanuts were still using red lead to stabilise and preserve their best table wine, resulting in the sorts of behaviour typical of the rulers of the day: Nero, Caligula, Claudius and Co.  Away out on the frontier, not only was such luxury out of the question, but the troops would never operate efficiently with lead poisoning. 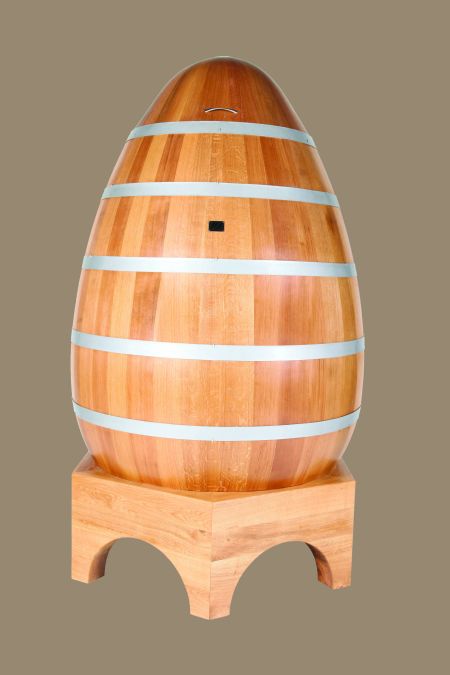 Enter the grange. The Middle East may have been the Holy Land, but in such a dusty, godforsaken wilderness the only way of keeping fruit was to dry it.  Every village and major household had a grange, where they’d store their currants, raisins and dates, maybe some pots of honey.  The water pots would be in there, too, in the cool.

Put simply, the amarone technique used to this day in Italy involves the fermentation of dried grapes.  So when Christ called for the water pots to be brought into the sun, it would been just plain dumb not to throw in some fruit, maybe even dates and honey. And he wasn’t mucking about: the six water pots were of two or three firkins apiece.

An ale firkin, or barrel, is about 40 litres; a wine firkin about 300 litres. So he made somewhere between 600 and 4500 litres of the best, which should have got the nuptials rockin’. No wonder three of the four scribes forgot to record it, and the one who did, on reflection, thought it was a miracle.

What does seem miraculous to me is that somehow the water jug is making a comeback in winemaking.  At Castagna wines last month, I was surprised to see Julian’s fermenters: two metres high, thick concrete and egg-shaped, like amphorae.  He explained that the concrete breathes, like oak; and that this organic natural shape ensures the wine circulates constantly and gradually within, ensuring maximum lees circulation to protect and enrich the wine; there are no corners which are difficult to clean, and the solidity of them keeps their temperature naturally constant and cool.  The tapered shape also affects the thickness and form of the cap of skins during ferment.

This new international move to the past began in some Roman ruins near Nimes in 1991, when the keepers of La Mas de Tourelles, a museum of ancient winemaking stuff there, began using the old tools to make new wine. The classic amphora shape seemed to impart a half mystical typicity to the wines: they seemed more smug and composed, and retained better freshness.  In the 20 years since, many experiments have been conducted, making egg-shaped fermenters from terracotta, concrete, plastics and polymers, steel, and now oak.

Some south-of-France winemakers are combining these technologies with the ancient techniques of Caucasian Georgia, and partially burying their amphorae.

But the biggest, newest egg-shaped buzz came from Italy, and SIMEI 2011, the recent Milan technical show.  Through coopers Foudrerie Francois, Bordeaux artisan Joseph François launched his big oak eggs to instant fascination.  Strange that it took 2000 years for somebody to combine Christ’s water-pots with his first employment, carpentry.

But perfectly apt that they should be unveiled in Italy.  It’s time the Italians tried something new.

Something for Pope Frank to contemplate: what came first?  Jesus or the egg?

The skeleton of this week’s column is from the White’s Wine archives.