An unexpected Republican nominee, Trump rode a wave of support from voters seeking change and willing to accept a candidate loose with facts and accused of sexual misconduct.

In a victory that has rattled financial markets worldwide, he upset Democrat Hillary Clinton, who would have become the first woman to serve in the Oval Office.

“Sorry to keep you waiting – complicated business,” the president-elect told supporters as he revealed Clinton had called to concede defeat.

“Now it’s time for America to bind the wounds of division,” he said in a speech that struck a very different tone from that he had repeatedly hammered during the campaign.

Gone was the insistence that his opponent would be jailed over her use of a private email server, for which he said last month “if I win, I am going to instruct my attorney general to get a special prosecutor to look into [her] situation”.

Instead, addressing supporters at his victory party in New York City tonight, Australian time, Trump said that he congratulated Clinton “and her family on a very, very hard-fought campaign”, adding that “we owe her a major debt of gratitude” for her service.

He said it’s “time for us to come together,” and has pledged to be president “for all Americans”.

A wealthy real-estate developer and former reality TV host, Trump rode a wave of anger toward Washington insiders to defeat Clinton, whose gold-plated establishment resume includes stints as a first lady, US senator and secretary of state.

Worried a Trump victory could cause economic and global uncertainty, investors were in full flight from risky assets such as stocks. In overnight trading, S&P 500 index futures fell 5 per cent to hit their so-called limit down levels, indicating they would not be permitted to trade any lower until regular US stock market hours on Wednesday.

A short time earlier, Clinton campaign chairman John Podesta told supporters at her election rally in New York to go home. “Several states are too close to call so we’re not going to have anything more to say tonight,” he said.

Victorious in a cliffhanger race that opinion polls had forecast was Clinton’s to win, Trump won avid support among a core base of white non-college educated workers with his promise to be the “greatest jobs president that God ever created.”

His win raises a host of questions for the United States at home and abroad. He campaigned on a pledge to take the country on a more isolationist, protectionist “America First” path. He has vowed to impose a 35 per cent tariff on goods exported to the United States by US companies that went abroad.

Both candidates, albeit Trump more than Clinton, had historically low popularity ratings in an election that many voters characterised as a choice between two unpleasant alternatives.

Trump, who at 70 will be the oldest first-term US president, came out on top after a bitter and divisive campaign that focused largely on the character of the candidates and whether they could be trusted to serve as the country’s 45th president.

The presidency will be his first elected office, and it remains to be seen how he will work with Congress. During the campaign Trump was the target of sharp disapproval, not just from Democrats but from many in his own party.

Television networks projected Republicans would retain control of the US House of Representatives, where all 435 seats were up for grabs. In the U.S. Senate, the party also put up an unexpectedly tough fight to protect its majority in the US Senate. 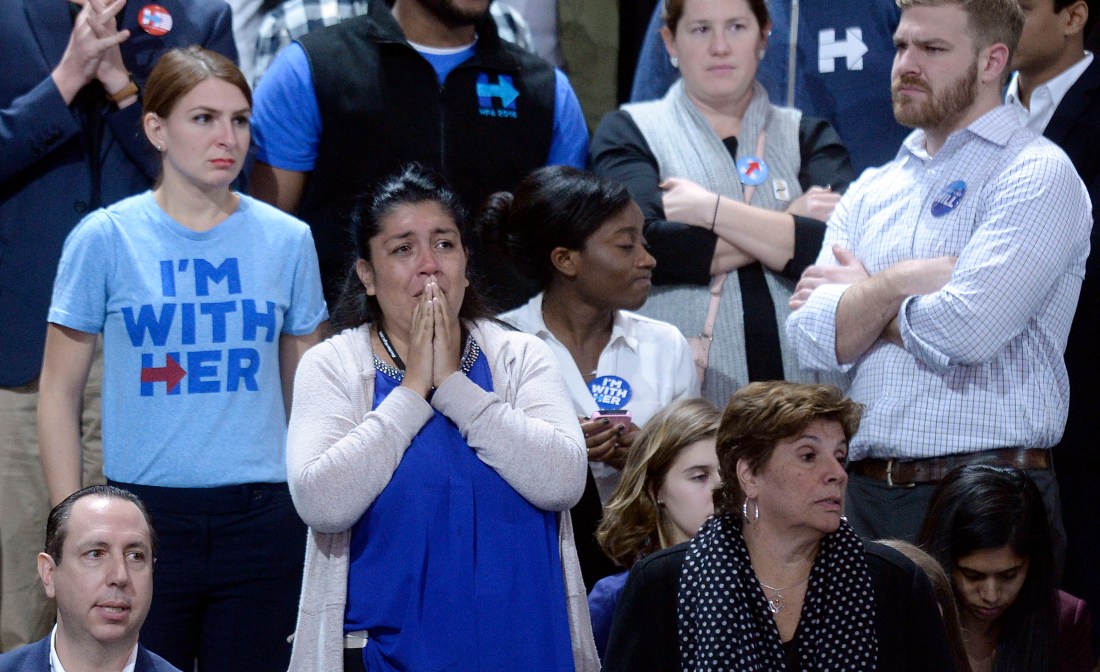 How will the presidency of Donald Trump impact on Australia?

If Trump keeps his election promises, the real estate mogul and reality TV show star will bring a wave of uncertainty to Australia and other allied nations who have heavily relied on the super power since the end of World War II.

In his first 100 days in office Trump has promised to withdraw the US from the Trans-Pacific Partnership, the proposed 12-nation pact with Australia, New Zealand, Canada, Mexico, Japan, Vietnam, Singapore, Malaysia, Brunei, Chile and Peru.

He has threatened to “rip up” existing free trade agreements with Australia and 19 other nations and “make really good ones”.

Trump has vowed to direct his new secretary of commerce to “identify every violation of trade agreements a foreign country is currently using to harm our workers, and also direct all appropriate agencies to use every tool under American and international law to end these abuses”.

A US-China trade war becomes a real prospect, with Trump threatening to slap a 45 per cent tariff on China’s imports.

“Withdrawal of support for TPP is bad enough, but the ramifications of Trump’s trade policies go much farther, threatening to inflame relations with China and disrupt existing alliances with free trade partners, including South Korea, Singapore, a critical partner in Southeast Asia, and longtime ally Australia,” the Peterson Institute for International Economics, a Washington DC-based think tank, stated in a report in September.

US military alliances with Australia, Japan, South Korea and other friendly nations will be reviewed, with Trump declaring allies need to pay the US “because we are providing tremendous service and we’re losing a fortune”.

Trump also says he will pull the US from the Paris Climate Agreement, stop billions of dollars in global warming payments to the United Nations and use that money to support America’s environmental infrastructure and natural resources.

He will dramatically boost the US military, increasing the Army to 540,000 active duty soldiers, rebuild the US Navy toward a goal of 350 ships, provide the US Air Force with 1,200 fighter aircraft and grow the US Marine Corps to 36 battalions.

“Peace through strength will be at the centre of our foreign policy,” Trump says on his campaign website.

“We will achieve a stable, peaceful world with less conflict and more common ground.” 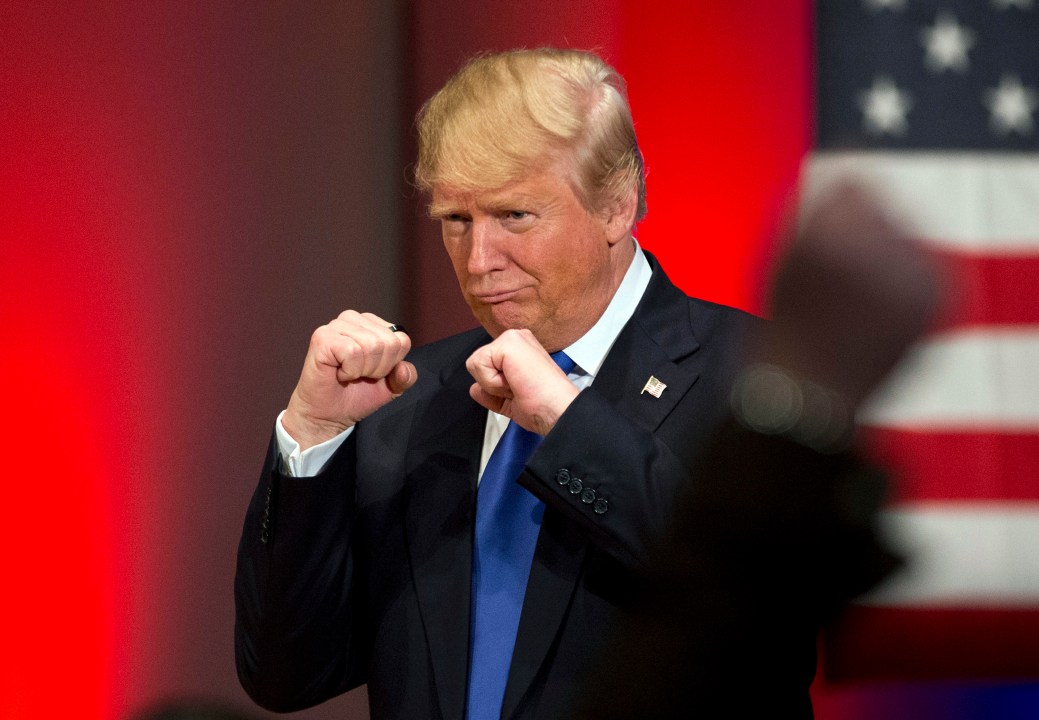 Foreign minister Julie Bishop has reassured Australians the government is prepared to work with Trump, whose against-the-odds election as the 45th president of the USA has sent ripples across the Australian political sphere and financial markets.

As it became apparent Mr Trump would win, Bishop said “a different administration will have a different impact on foreign policy and domestic policy.”

“But the Australian people should be reassured that the Australian government has been engaging closely with both teams – the Clinton team and the Trump team – to put us in the best position possible to focus on our national interest and our economic and security interest as they are affected by the United States,” she said.

She said it was in Australia’s interest for the US to remain focused on the Asia-Pacific region.

Bishop said the new president’s first challenge would be to unite Americans after one of the most “deeply divisive” elections in US history.

She said Barack Obama had 73 days left of his presidency – during the so-called “lame duck session” of Congress – to approve the Trans Pacific Partnership trade deal and Australia remained hopeful this could be achieved.

While neither Trump nor Clinton supported the TPP in its current format, there was also hope for an alternative deal – the Regional Comprehensive Economic Partnership.

But Former Labor foreign minister Bob Carr said Mr Trump would be a “disaster” for Australia.

“Trump is the one who stands out as being ignorant about the implications of America’s nuclear arsenal and prepared to stumble blindly into a nuclear exchange,” he told 3AW radio.

“Are we going to see a Trump movement here in Australia? For sure I think we will and I hope, just like the US, it is contained within the Liberal National coalition rather than one that springs up from outside it,” Christensen said.

He hoped the US election put an end to plans for the TPP.

.@GChristensenMP says there's been a revolt from the bush in the US #Election2016 https://t.co/Qn60NKKBv2

With Trump promising during the election to withdraw from the World Trade Organisation and impose new tariffs on China, Nationals leader Barnaby Joyce said “isolationism” would be a retrograde step.

“I hope cooler heads after the election come into play. America can’t just trade with America, it has to trade with the world,” he said.

Independent MP Bob Katter said the US poll and Britain’s exit from Europe “puts the official tombstone over the free-marketeers”.

@realDonaldTrump Mr President my door will always be open. Congrats on behalf of Pauline Hanson's One Nation Party of OZ. #MAGA #auspol

Security analysts have warned a Trump presidency could take US military forces out of the region, presenting security challenges for Australia as China flexes its muscle in the South China Sea.

His plans to build a wall between the US and Mexico and crackdown on Muslims could also embolden anti-immigration forces in Australia.

Labor foreign affairs spokeswoman Penny Wong said the opposition and government needed to put the “light and heat” of the US election behind them and encourage the US to continue to engage in the region.

On the markets, Australian investors exited riskier assets as the ASX dipped just over two points.