The judge on Thursday described the Paralympian’s testimony over the 2013 shooting of girlfriend Reeva Steenkamp as “untruthful” and delivered a damning indictment of the original verdict.

The double-amputee athlete known as the “Blade Runner” was released on parole in October after serving one year of his five-year prison sentence for the lesser charge of culpable homicide.

He killed Steenkamp, a model and law graduate, in the early hours of Valentine’s Day two years ago, saying he mistook her for an intruder when he shot four times through the locked door of his bedroom toilet.

“Guilty of murder, with the accused having criminal intent,” judge Eric Leach told the court in South Africa’s judicial capital Bloemfontein in a dramatic legal reversal.

“The matter is referred back to the trial court to consider an appropriate sentence.”

The Paralympic gold medallist, who was not present in court, now faces a minimum 15-year sentence for murder – although he could be released earlier on parole.

“It is inconceivable that a rational person thought he was entitled to fire at this person with a heavy-duty firearm,” said Leach, who described Pistorius’s testimony as “vacillating and untruthful”.

The National Prosecuting Authority confirmed that Pistorius, 29, will remain on parole under house arrest at his uncle’s mansion in the capital Pretoria until he is re-sentenced. 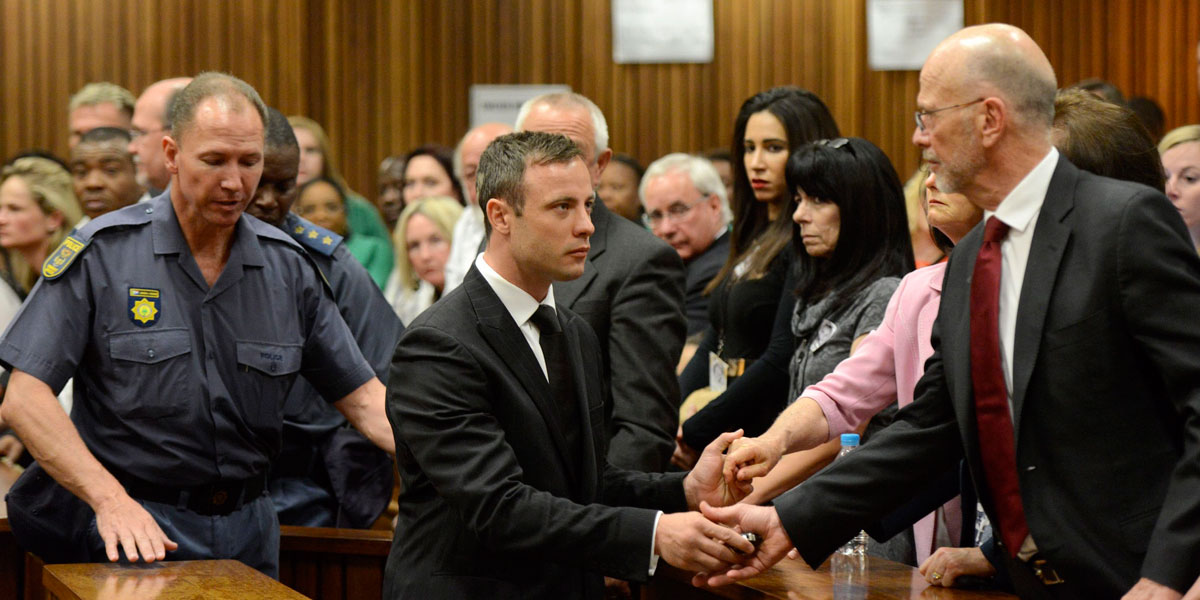 Oscar Pistorius holds the hands of his uncle Arnold Pistorius and family members at an earlier hearing.

Her mother June sat quietly in court with a sombre expression as the ruling was announced, and made no immediate comment afterwards.

At the crux of the case was how trial judge Thokozile Masipa interpreted the principle of “dolus eventualis” – awareness of the likely outcome of an action – under which she acquitted Pistorius of murder.

“This was expected. Judge Masipa legally got the whole issue completely wrong,” William Booth, a defence lawyer based in Cape Town, told AFP.

“Four shots into a tiny toilet when you know somebody is on the other side – that person shooting knows he is going to hit the person.

“He faces a minimum of 15 years. My feeling is that he’s done a year, so looking at all the factors, maybe nine, 10 years in prison.”

The trial of Pistorius, who became a global icon as the first double amputee to compete at the Olympics in 2012, attracted worldwide attention.

He denied killing Steenkamp, 29, in a rage after the couple had gone to bed, sobbing and occasionally vomiting in the dock as details of his lover’s death were examined in excruciating detail.

“I was overcome with fear,” he said during his trial last year, describing how he thought he heard an intruder in the bathroom.

Pistorius killed Steenkamp at the peak of his fame, and he has since lost his glittering sports career, lucrative contracts and status as a global role model for the disabled.

“The legal team will study the finding and we will be guided by them in terms of options going forward,” a Pistorius family spokeswoman said in a brief statement.