“I love people that are prepared to get themselves out on a cool Friday night in the Adelaide Hills and come and drink some Chardonnay,” Ryan says.

On Friday, he hosted Adelaide Hills Chardonnay Heroes, a masterclass tasting of some of the region’s gold medal and trophy winners, and the first event in Chardonnay May.

“They’re the kind of people that anyone involved in wine loves to talk to.”

Chardonnay May is for the wine explorer, aficionado and novice alike, and is sure to draw them, day and night, to the Adelaide Hills wine region, which is presently ablaze with breathtaking autumnal colour.

A whole month dedicated to celebrating Chardonnay – with special tastings across the month and a deep dive later in the month over nine days (May 20 – 29) – the event presents a range of experiences, from vertical tastings to masterclasses, a degustation dinner and lunches to the Ultimate 80’s Chardy Party. 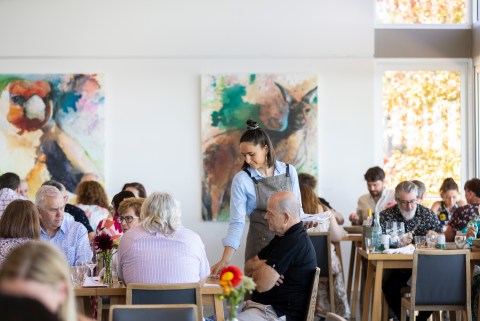 Nineteen wineries are being showcased and Ryan says he believes the Adelaide Hills could become Australia’s greatest Chardonnay region, now that “we’re drilling down to the right places to grow it”.

“In the 80s and 90s, during that Chardonnay boom, everyone was planting it everywhere. They were planning Chardonnay in the valley floor in the Barossa… in Clare… in Alice Springs,” Ryan explains.

“The style of the time was these buttery rich, peachy, sort of oaky styles of Chardonnay.

“We’re now retreating to the to the places that make great Chardonnay – and those places are cooler climates.

“Chardonnay with a really lovely, pure line of acidity is great Chardonnay.”

This is something he says also comes through in the varietal’s sparkling wines, some of which starred in Friday’s masterclass.

“They just have this fantastic long, pure and mineral-laced line of acidity. Acid is the lifeblood of all the wines we drink… That freshness, that energy.”

But back to the event and approaching it like a true punter.

“I think events like this are great because they give you an opportunity to look at a whole bunch of wine, in context, and alongside peers,” Ryan says.

“And it’s rare that most people get to look at a dozen or more wines side by side.

So, what about the “greatest Chardonnay region in Australia?”

He laughs, saying people in Tasmania, the Yarra Valley and Mornington Peninsula “will want to throttle me for saying that”.

“But I just think there’s such diversity in the Adelaide Hills and such opportunity to explore a wide range of Chardonnay styles, in a wide range of sites that I think makes it really exciting.”

See the events for Chardonnay May