Showdowns are said to defy form and the premiership table. This one in June 2014 did exactly that to become one of the Crows’ greatest derby upsets. Port Adelaide coach Ken Hinkley had his Adelaide counterpart Brenton Sanderson’s number in their first three derby encounters with the deepest scar lingering from his tactical ploys – and the Angus Monfries’ miracle goal – in the last Showdown at Football Park a year earlier. Under pressure to keep his job (that was gone months later), Sanderson guided the 11th-ranked Crows to an upset 23-point win against league-leading Port Adelaide at Adelaide Oval. Sanderson finished his Showdown story by finally outpointing Hinkley, even after losing key players Rory Laird and Sam Kerridge who failed pre-game fitness tests.

In hindsight, this shouldn’t have been so very surprising.

I mean, it was. But we should have seen the signs.

After all, if you look at the Crows’ season to that point, it was in some ways incredibly ordinary – but there was a certain poetic majesty to our win-loss count:

So, as you can see, to the untrained eye we were heading towards certain defeat against a side that had won 11 of its first 13 games… but to the eye that has brains, our victory was never in doubt.

And even better, it kickstarted a run of losses for the Power that ultimately saw them lose their top four berth on the eve of the finals.

It was heritage round for Season 2005 – and the throwback theme put Port Adelaide in its original blue-and-white hoops of 1870 while the Crows remodelled South Australia’s first red, gold and blue State jumper from the 1930s. Crows champion Andrew McLeod left a photoshoot describing the Showdown rivals being presented as “bananas in pyjamas”. Adelaide led at every break and won by seven points while the Showdown Medal judges called the best-afield race a tie between Crows midfielder Simon Goodwin and Port Adelaide counterpart Shaun Burgoyne – the only time the medal has been shared. The umpires gave their nod to Goodwin in the Brownlow Medal 3-2-1 voting.

Here’s the thing I don’t understand.

Why would Port be so preoccupied with prosecuting their tired old ‘prison bars’ debate when they’ve got this winner sitting unused and unloved in the kit drawer? 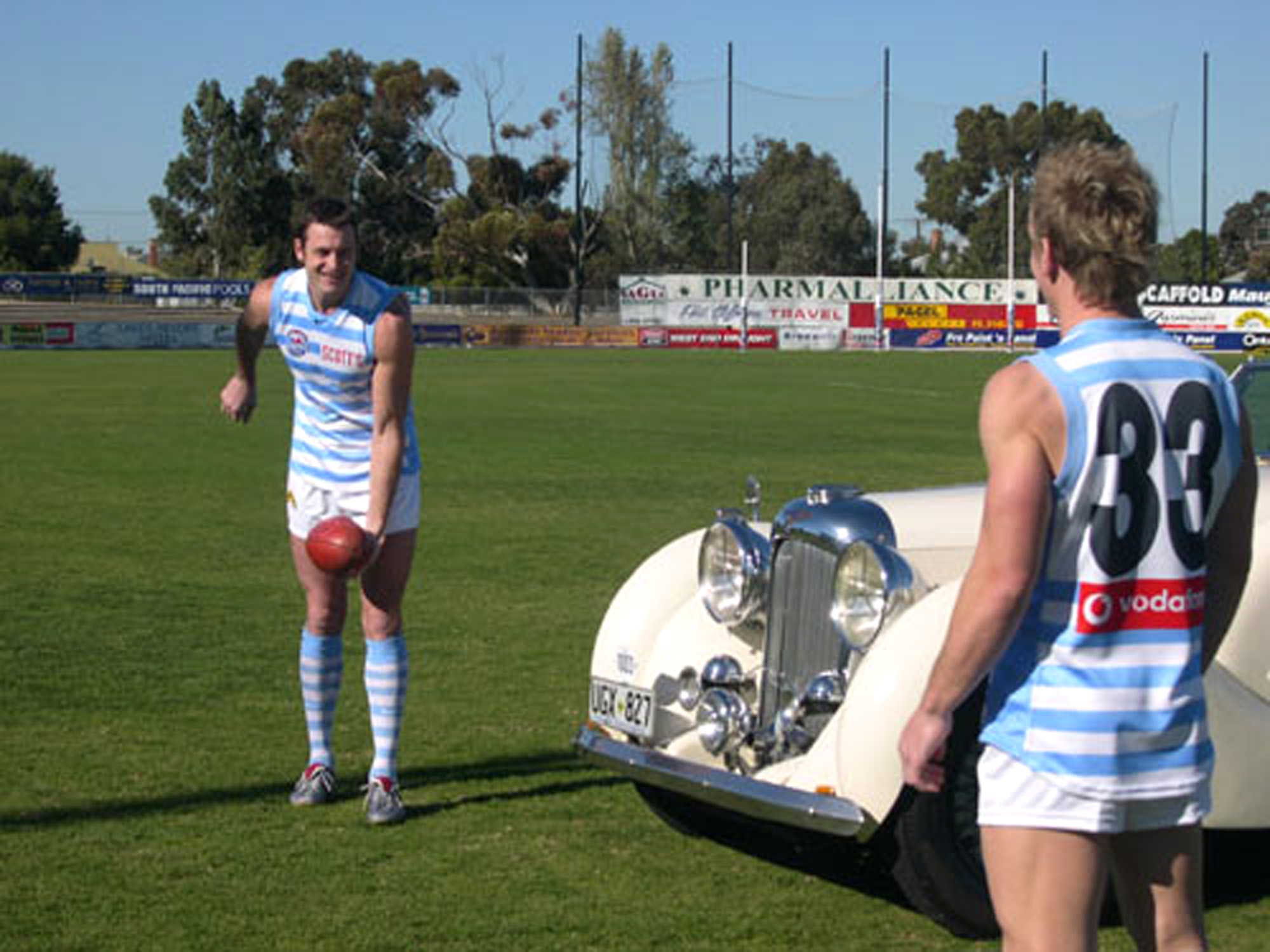 And moreover, why fret so much about being allowed to dress up as a poor man’s Collingwood when you could just as easily be a poor man’s Geelong?

No one man can win the Showdown on his own it would seem. Port Adelaide’s disposal record – 41 touches – is shared by midfielders Peter Burgoyne and Tom Rockliff in losing derbies played 11 years apart. Burgoyne dished out 21 handpasses and 20 kicks – but gained no Brownlow Medal votes from the umpires – in the first derby of 2008 that Adelaide won by six points at Football Park. Rockliff had 23 kicks and 18 handpasses – and collected two Brownlow votes – in the first Showdown of 2019 that Adelaide won by 20 points at Adelaide Oval.

Funny. Mark Ricciuto got that same tally in the Showdown of Round 7, 2000 – Adelaide’s greatest ever comeback, from 42 points down to win by seven points.

He also had 25 kicks and kicked four goals – including the one that dramatically put the Crows in front.

Oh, and he did poll three Brownlow votes.

So maybe one man can win the Showdown on his own?

In fact, a dejected Mark Williams even said after the game that Roo won the game off his own boot.

Still, my fondest moment came from someone else – Andrew McLeod, when he shrugged a tackle to ice the game in the dying minutes, before brandishing his forearms aloft in celebration.

Good times. Anyway, where were we?

McLeod played in the first Showdown in April 1997 and set the record for most derbies with his 27th in the first clash with Port Adelaide of Season 2010. A Port Adelaide premiership player in the SANFL, McLeod had a 13-14 win-loss record in Showdowns. Marathon-running midfielder Kane Cornes – second son of inaugural Crows coach Graham Cornes – played his first derby in late April 2002 and equalled McLeod’s derby record in his 297th league match in 2015. He had a 14-13 win-loss record against the Crows.

Funny really. Ironic. A Port Magpies stalwart went on to become the greatest Crows player of all time, while a Glenelg scion and son of Adelaide’s inaugural coach went on to become the biggest Crows troll of all time (which I’m fairly certain is meant as a compliment). Oh, and also the winner of four Port best-and-fairests (which isn’t) and the club’s first player to reach 300 games.

Adelaide started the first Showdown of 2011 with 4.6 and a 27-point lead at quarter-time after holding Port Adelaide to just three behinds. The Power was winless from three games and entered the derby off a 79-point loss to Geelong at Kardinia Park. The script was transposed at half-time with Adelaide held to two behinds in the third term while Port Adelaide scored 5.1 to take a 20-point lead before closing out the match as 32-point winners. It was the last time Neil Craig coached the Crows in a derby; he finished with an 8-7 win-loss record.

I really have no memory of this one and had to look it up, but apparently David Rodan was best-on-ground and kicked four goals, no doubt whetting his appetite for his future career as a goal umpire.

Brownlow Medallist Gavin Wanganeen was on crutches with an ankle injury at the end of the first derby in April 1997 when Port Adelaide had vice-captain Brayden Lyle collected the first Showdown Trophy on Football Park. Four years later, Wanganeen was out-stepping Crows defenders while he rewrote his personal records with a career-high six goals in Showdown 9 that finished with Port Adelaide achieving its highest derby score, 23.15 (153).

I’m not sure why Rooch keeps choosing these so-called highlights… ? More like lowlights, I’d have thought.

Anyway, I recall Peter Vardy played well, but that was about it. My main memory of this game is that it was the last in a trio of very unpleasant losses that started 2001 – the Leoncelli shocker against Melbourne in Round 2 sandwiched between a pair of blowouts against Sydney and Port.

Fortunately, the following week came one of our greatest ever home-and-away wins, when Roo led the way in the wet against Carlton, and we ended up playing finals that year (for one week at least).

Who knows, maybe Gary Ayres wrote the number 18 on the whiteboard after the game?

Crows midfielder Patrick Dangerfield started Season 2015 as a free agent and extreme speculation on his future (that did play out as a return to Victoria to play the club he supported as a boy, Geelong). All coach Phil Walsh asked Dangerfield was he give his utmost to Adelaide – as he did in the only derby played with Walsh as Adelaide’s senior mentor. Dangerfield rewrote the record books for clearances – with 15 – while Port Adelaide won by 24 points. Dangerfield left Adelaide at the end of 2015 with a 6-7 win-loss record in derbies and one Showdown Medal from the first derby of 2012.

I don’t recall this individual ever having played for my club actually. 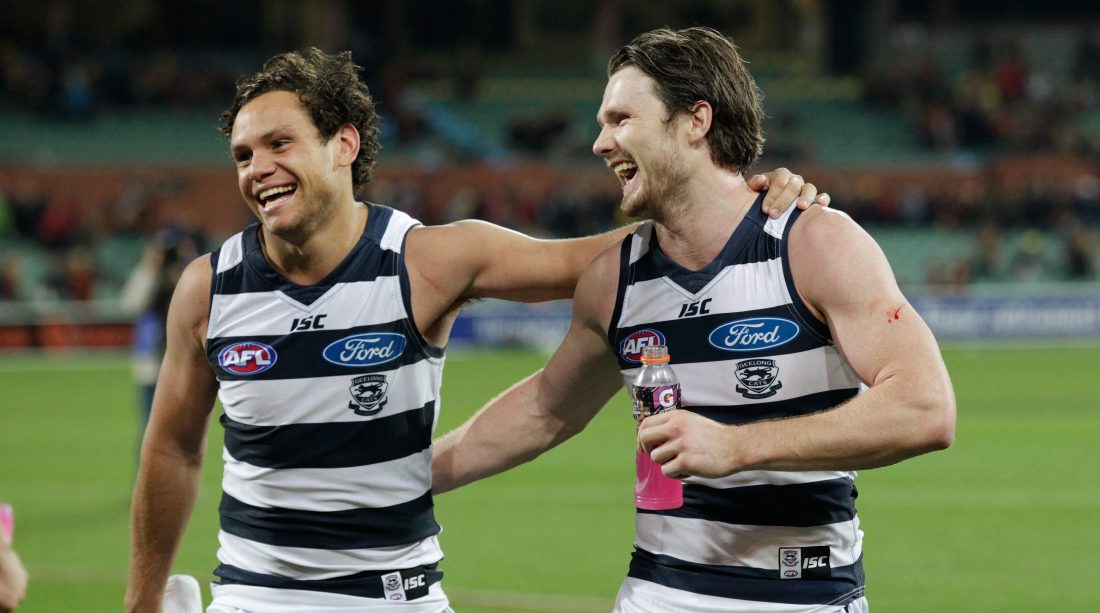 “Showdown” became the trademark of the South Australian AFL derby on the work of a marketing executive at the game’s first sponsor, SA Brewing. A medal for the best-afield was not struck until the seventh derby played in 2001 and was dubbed the Showdown Medal rather than carry the name of any football greats. The one-off exception to the rule was in the second derby of 2015 with the medal named in honour of the late Phil Walsh in the tribute match to the murdered Crows coach. Adelaide midfielder Scott Thompson won his only Showdown Medal with his 36-disposal performance at Adelaide Oval.

Thommo was a man out of time. Not quite as out of time as Matty Clarke, who joined the Crows right after their two flags from Brisbane, right before their three.

An acrobatic career manoeuvre I like to call the “Reverse Martin Pike”.

When Thommo, originally from Port Magpies via Melbourne, arrived at the club, things were on the up, but he was in his own career heyday when the club was in its nadir. Every week of 2011 until Neil Craig’s inevitable departure he was carrying a flailing side on his shoulders, which were thankfully quite broad.

And yet by the time we became a genuine contender again in 2017 he was a bit-part player, seeing out his time in the SANFL with the occasional lacklustre re-emergence.

I’m glad he had this game, among others, to mark his place in football history.

Only two men have won the two Showdown Medals – as best-afield in the derby – in one season. Both are Port Adelaide players. Josh Francou won both medals in Season 2001 when he was third in the Brownlow Medal count. Robbie Gray won both medals in  2018, claiming the second after Port Adelaide had lost Showdown 45 by three points with the Crows scoring the win on key forward Josh Jenkins’ contentious late goal that was reviewed to determine if it hit the post.

Look, Gray won the medal that day but the true best-on-ground was clearly Josh Jenkin’s grandma.

As for Francou, I know Port people claim him as one of their own but he has more recently worked as an assistant coach with the Crows, a stint which as far as I recall ended very amicably and without controversy or incident, so we’ll probably claim him too.

Adelaide rewrote the record books – while appearing the team to beat for the 2017 AFL premiership – in the second Showdown of the season by beating Port Adelaide by a derby record winning margin of 84 points at Adelaide Oval – 18.22 (130) to 7.4 (46) while holding Port Adelaide to just one goal in the first half. This gap surpassed the 83-point difference between the rivals in Showdown 19, the semi-final derby of 2005 at Football Park. Crows ruckman Sam Jacobs collected his third Showdown Medal with 42 hit-outs in an epic duel with Patrick Ryder (40 hit-outs).

I was quite pissed off when Port kicked their second goal.

Sure, it was a few minutes into the third quarter, but still annoying.

And even though the Crows were really in control the whole time, I didn’t feel (almost) completely safe until, with the margin at a neat 50 points in the dying seconds of that same quarter, Josh Jenkins made one of his more positive contributions by strolling into an entirely unmanned forward 50 to laconically drill our 12th.

Eddie was at his electric best with four goals and, well, this was about as good as it got as a Crows supporter in the Don Pyke era.

It lasted around another month before it all went sour, more or less for good.

Come back next week for the final push to the top Showdown moments.

RAA proudly supports both Port and the Crows – and hopes that bringing you the Showdowns’ 50 greatest moments doesn’t cause too many arguments amongst family and friends.