Prof Prestidge and his team at the UniSA Cancer Research Institute are focused on developing innovative pharmaceutical technologies to help cancer medications work more effectively in the body.

“Many researchers get to a point where their new cancer drug works well in the lab, but then doesn’t work very well within humans for a number of different reasons,” Prof Prestidge says.

“We have developed clever little nano-carriers which can take the drugs across biological barriers or help them target the right area within the body, and ultimately work a lot better.”

He has recently been awarded a grant from The Hospital Research Foundation Group to improve a common prostate cancer drug called Zytiga, which currently requires the patient to fast for many hours prior to and after taking the drug.

“It means the drug is being used very inefficiently – literally 95% of it goes down the toilet, it doesn’t get absorbed by the body,” he says.

“So, we’ve developed technologies that can overcome this and the THRF Group grant will help us undertake key steps which will lead to human clinical trials, hopefully in the next few years.”

Prof Prestidge’s work is crucial for improving cancer therapies and patient outcomes – the importance of which he knows only too well.

As a former cancer patient himself, Prof Prestidge has a personal appreciation for the research and healthcare system that saved his life.

Two years ago, he received a positive result from the standard bowel cancer screening kit mailed to over 50s.

“I wasn’t worried at first because those poo tests can bring a lot of false positives, but it made me go to my GP and he suggested a routine colonoscopy,” he recalls.

“I thought it was completely routine, but I got my results back and they said they’d found a tumour in my bowel.

“My life was thrown completely upside down. Three weeks later I was having surgery, a full hemi-colectomy where I had half my colon removed.

“I was very lucky though because even though the tumour was a decent size – about an inch in diameter – it wasn’t very advanced, it hadn’t spread to the gut or the lymph system.

“So, I didn’t have to have chemotherapy in the end, but I did get knocked around by the surgery. I’ve never been to hospital in my life, I’m a very fit person; but I went to have the surgery, and then you get infections, and your bowel doesn’t work properly.” 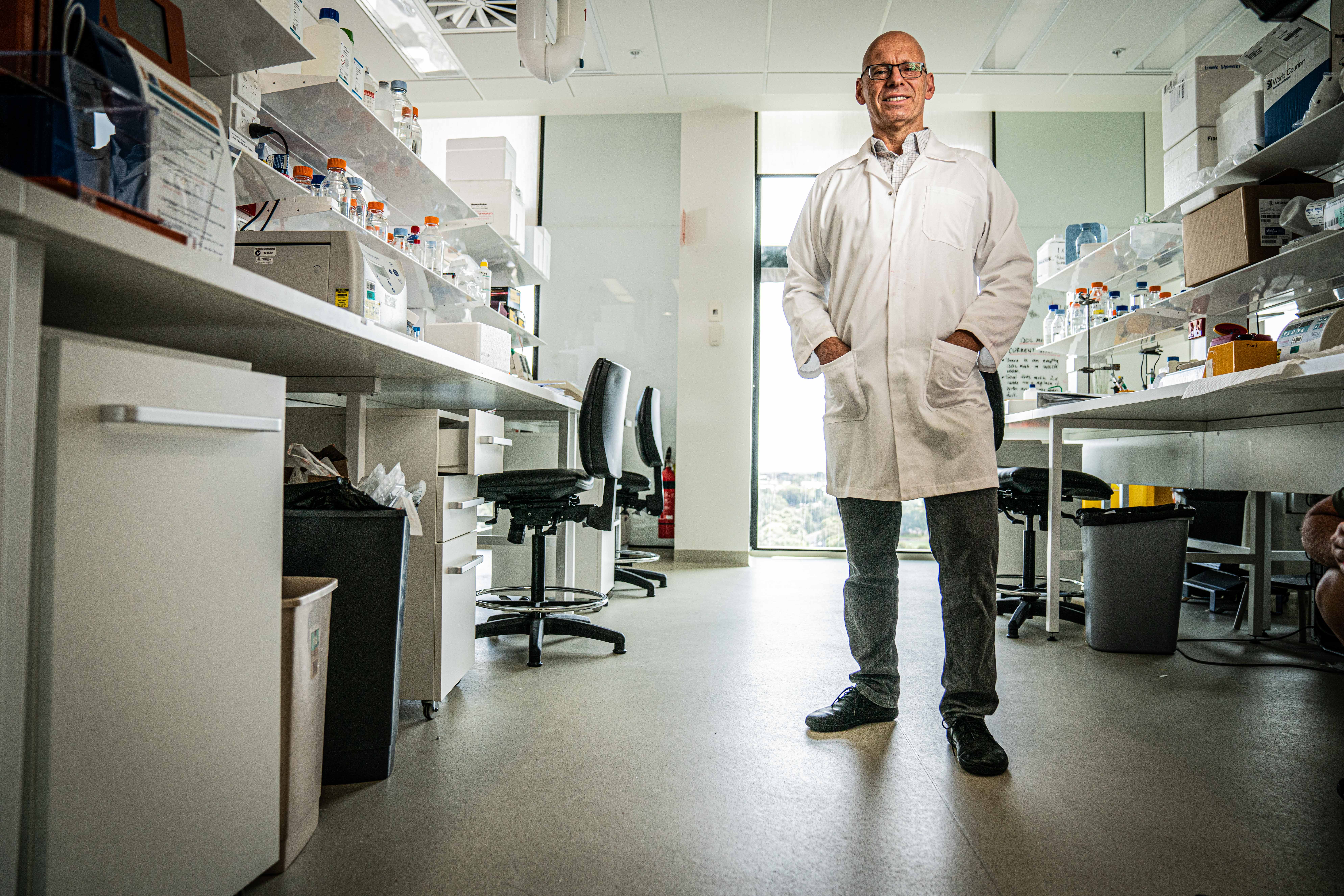 Ironically, Prof Prestidge works on some of the bowel cancer drugs he would have been prescribed if it hadn’t been diagnosed so early. His experience has also made him a strong advocate for undertaking routine health checks as you age, even for the fit and healthy.

Now, having won his own round against cancer, conducting world-leading research isn’t the only way he’s continuing to fight disease in our community.

As a community fundraiser, Prof Prestidge is putting his money where his mouth is by participating in charity bike rides and raising money to find a cure in the fight against disease.

Within six months of his surgery, Prof Prestidge was back riding his bike and is currently riding about 300km a week.

“I like to be part of the local community, and I do charity bike rides to raise funds for a range of different causes,” he says.

Prof Prestidge knows just how vital community support is to advancing medical research. Grateful to have received this support for his own research through The Hospital Research Foundation Group, he was thrilled to be able to give back by volunteering for their Together. Fight. television campaign.

Together. Fight. is a message for all South Australians, reminding us that we are not alone in the fight against diseases and illnesses such as cancer. Together with researchers, clinicians, patients and community support, The Hospital Research Foundation Group is fighting right alongside us by providing grants for life-changing medical research and improved healthcare.

“Cancer diagnoses are unfortunately increasing, but with research, we can play a role in saving people’s lives. And that’s what Together. Fight. is all about,” Prof Prestidge says.

To find out more about THRF Group and what it means to, Together. Fight. visit hospitalresearch.com.au/togetherfight.