Featuring one of the most extraordinary sets to grace the Playhouse stage in recent years, Pulitzer Prize-winner David Lindsay-Abaire’s razor-sharp comedy sees two formidable old women duke it out to claim their rightful spot in the nursing home.

What starts as a humble bet between two rivals becomes an epic battle of wills that uncovers their darkest secrets.

In the lead-up to the first performance on Friday, actor Nathan Page sits down with his inimitable co-star Nancye Hayes for a rare insight on the rehearsal process, the live theatre experience and Hayes’ upcoming 60 year anniversary in the industry. 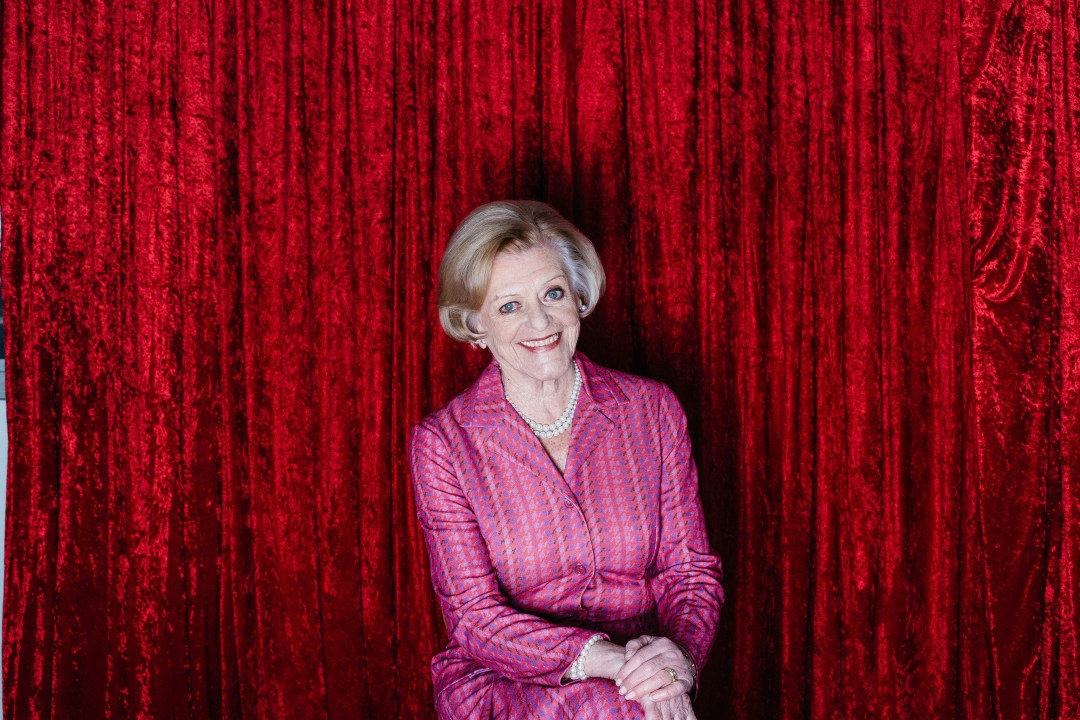 Nathan: How did you find the first day of rehearsals?

Nancye: Well, Nathan, I always feel like it’s the first day of school. I’m always very nervous on the first day of rehearsals and that has never changed after all these years. I had met Carmel Johnson a couple of days earlier because we had so much to do, and I had an instant bond with her. I was thrilled she had been cast as Marilyn. Then to meet the rest of the company on the first day was lovely.

So you hadn’t worked with Carmel before?

No I hadn’t met her at all, I had watched her in Decameron 2.0 and had really enjoyed those.

It’s strange, those first day nerves. I think everyone gets it.

I think they do, and in different ways. Some are outgoing and some are quiet, but I think we all bonded very quickly. Well I felt we did.

Yeah agreed. I’m sort of someone who will be on the back foot if I’m not quite sure, rather than go over the top.

Yeah. And I have known Mitchell Butel (director) for so long and he was great at bringing us all together on that day. And you’ve worked with him before, too?

Yes, as an actor but not as a director. So it’s been special working with him. He’s directed you before?

He directed me in a concert version of Funny Girl where he used 11 different people playing Fanny Brice and I played Fanny’s mother, and that was really good. He has a wonderful enthusiasm and ear and eye for comedy in particular. I just think he has a really special quality in that way.

When you come to a new play and a new character, where do you start? Is there something you bring to day one, or are you just feeling your way?

Well I try to go through a play and see what I say about myself, what other people say about me, the kind of woman I am… I mean Abby is a cantankerous woman, she’s a private woman, and I tend to be a chatterbox so it’s the opposite to me! Once I know what she’s going to look like and what she’s going to wear, that informs it a bit for me.

It’s funny because different actors would start somewhere different, and I don’t know about you, but as soon as I’m reading the play that intuitive creative process is already underway and it doesn’t necessarily sit anywhere yet, but it’s sort of this mercurial place…

Until you get on the floor and try to make it work and think, oh, I’ve got to change that! 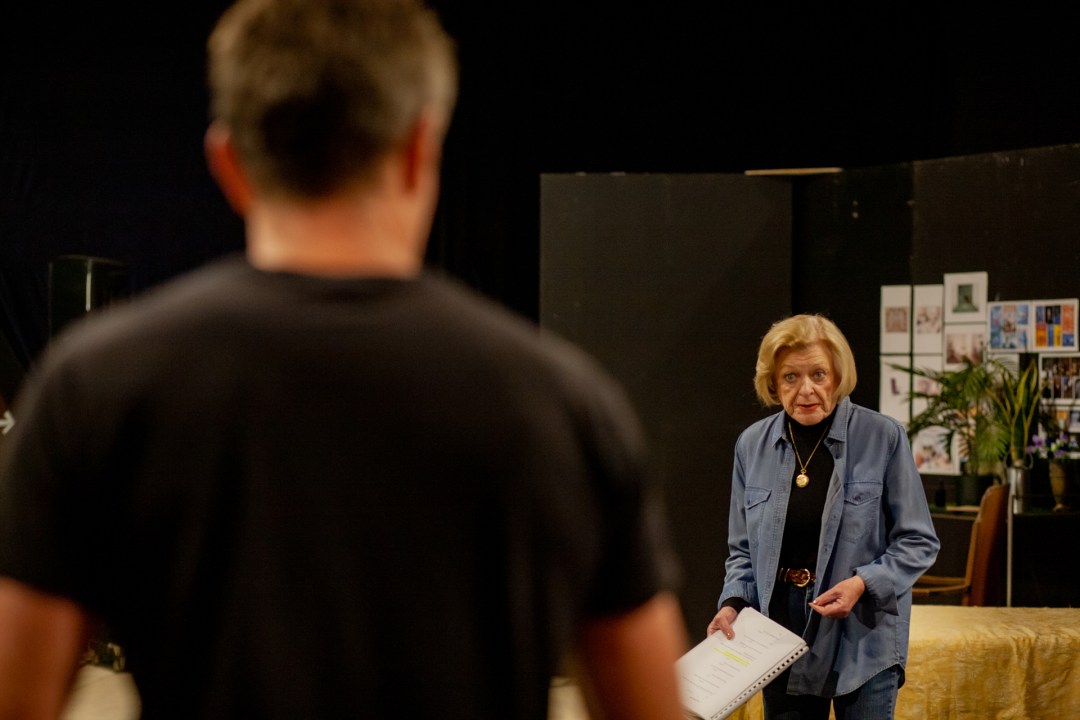 Exactly. What do you think you’ll take away from your character?

I think it will be an understanding of older women and the situation of losing their husbands and being in a retirement village, the compatibility thing, how some people can seem so different and then in the end become such wonderful friends once the barriers are broken down. I’m thinking more about getting older with this play and what it means. I have a friend who says, ‘you don’t plan your life when you get to this age, you plot it’.

Yeah, I think everyone is thinking about getting older.

And family, and what family means.

This play has such wonderful tendrils in the way it weaves itself, and then it comes out in these delightful little explosions here and there. That’s where the joy and the comedy seems to come from. I wouldn’t call myself a comic actor, and going so big and being allowed to go so big is unusual for me but it’s fun to do.

Yes, I think the play is full of surprises. It leads people up a certain path and gives a real turnaround all of a sudden. It’s a bit of a rollercoaster. With our first small audience in the rehearsal room, once we started hearing the laughter, I think as actors we could feel the drive in the play increasing. It moves very quickly. I think people will walk away having a great night in the theatre.

Yes, because you have been uplifted and also taken to some emotional places in quite a gentle and beautiful way. It’s funny playing a few different characters, because I go from being so stupid and clownish and then into playing your son Benjamin, which goes to such an emotional place. I’ve never done a scene like ours before where I feel like I could cry at any moment. And I actually don’t want to – it just comes out of the blue and not always in the same spots. But I don’t mind being in that uncomfortable place.

It’s an uncomfortable scene. They’re so estranged, but there’s such a love that comes to him from her. She’s had to cut herself off and build up this shell and then he’s suddenly there again. Without giving too much away…

Well, to pivot away from the narrative let’s talk about the set, which is going to be particularly spectacular. How are you feeling about performing on stage after a month of rehearsals?

Oh it will be so exciting. The playwright really puts in a lot of challenges to technically be solved in this play, from the spook house to all the other things that happen. I read an article where he said he likes to write these things and then pass it over to people to solve them. When I first read the play, I thought, ‘how are they going to do that? And that?’ It’s cheeky of him.

He absolves himself of any responsibility. What do you think is one of the most fun scenes?

I think the spook house, because you do this terrible clown… and you never know quite what to expect!

I find it hard to keep a straight face with Lewis.

So do I. He’s really become his own entity. Well, I think we’ve got carried away with our chat, but just to finish off – you’re celebrating 60 years in the industry next year, which is incredible. What is the most notable change you’ve seen over that time?

Technically the theatre has changed enormously, they can do almost anything now. It’s extraordinary. And I’ve done a lot of musicals and not so much plays, but there was a time where musical people didn’t even do straight theatre. The great thing from my time in musicals is we had some Australian writing and you could finally speak in your own voice. That was a huge turnaround, because for so many years we were only doing English or American accents. Having seen the Australian versions of many overseas shows now, I’d say ours are just as good – sometimes better. 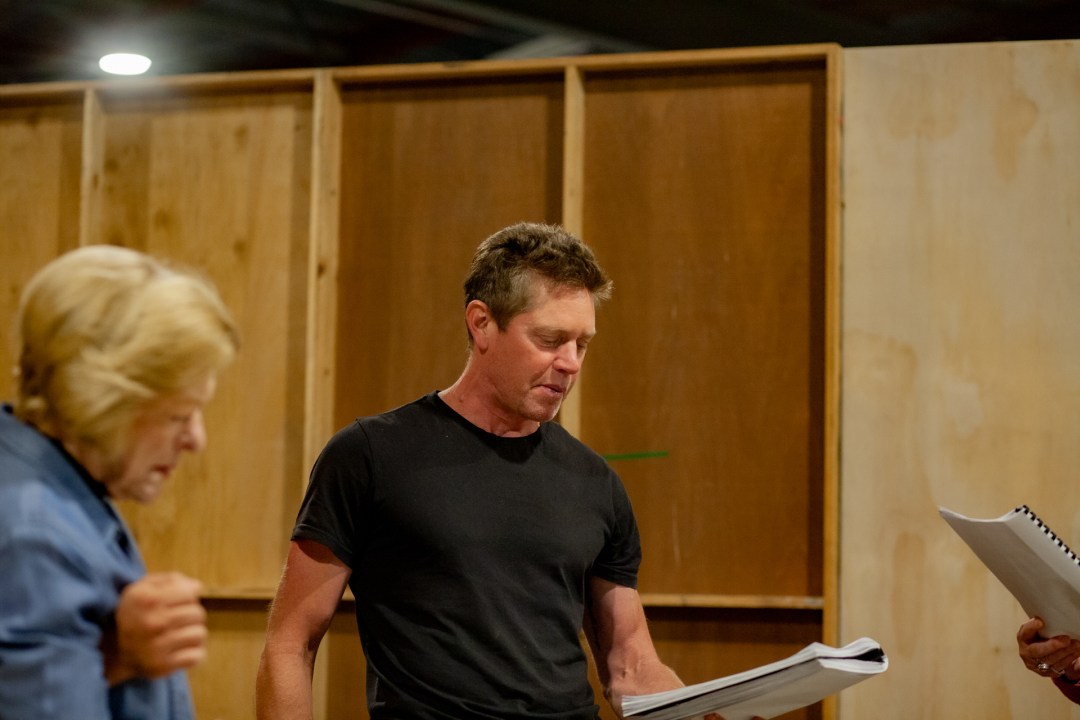 Well, Nancye, it’s been a pleasure and it’s genuinely been a wonderful experience working with you. I’m really looking forward to having a play up and running and seeing it become its own thing.

And it’s been terrific to meet you because I’ve seen you so much and everyone keeps saying, ‘ooh you’ve got Nathan Page in the show’ and I’ll go, ‘ooh yes he’s playing my son!’ I’ve had you as my son, and Nicole Kidman as my daughter. So you’re pretty up there.