CaravanStats data prepared by accounting firm BDO in collaboration with the Caravan Industry Association of Australia, RMS and Newbook, show the state’s 131 caravan parks started the year strongly despite bushfires on Kangaroo Island and the Adelaide Hills.

Mild summer conditions helped SA revenue exceed 2019 levels by about $1 million in January and February, before a mid-March slump saw visitor nights plummet for the rest of the month and continue to head south in April and May.

Overall, caravan park revenue from tourist accommodation for the first five months of 2020 is down 33 per cent, about $28 million on last year across South Australia. Guest nights across cabins, powered and unpowered sites are down 27 per cent, or 308,000 nights.

April, which this year included Easter and the school holidays was the hardest hit, accounting for about half of the lost revenue in South Australia.

However, June is tracking almost on par with 2019, following a bumper long weekend which lured thousands of South Australians out into parks across the state. 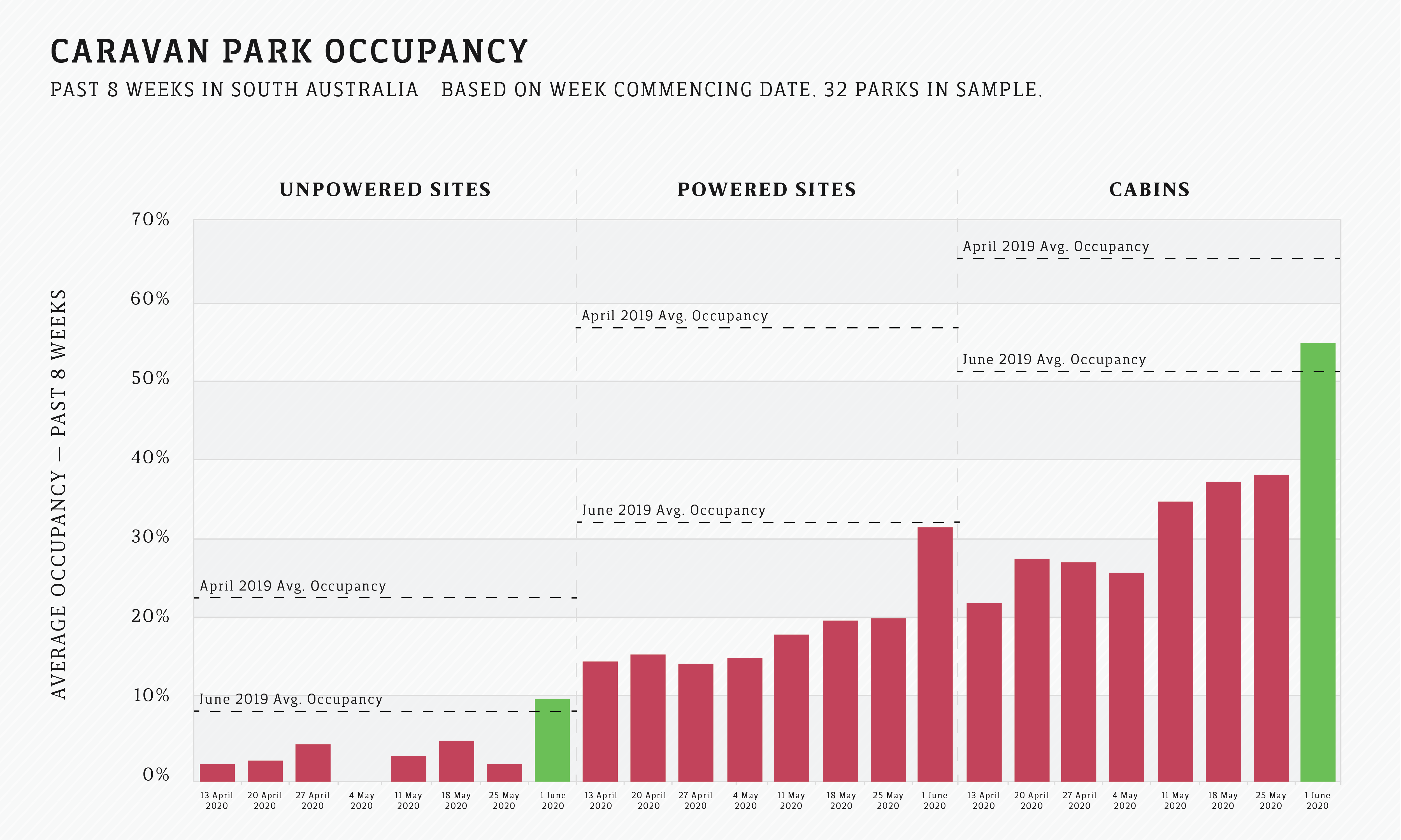 The Adelaide-based G’Day Group, which includes Discovery Parks and Top Parks, is Australia’s largest caravan park operator with 290 parks, including 42 in SA.

“Easter being the second major time when people go on holidays after Christmas was pretty devastating for the industry, so April was a very bad month,” he said.

“The good news is that people want to travel and because they couldn’t get away for Easter and they’ve been hanging out at home we did see some good numbers flowing through the state on the June long weekend and the outlook is pretty positive.

“But people are cautious and even though tourism is back open we still expect to be down in June on last year.” 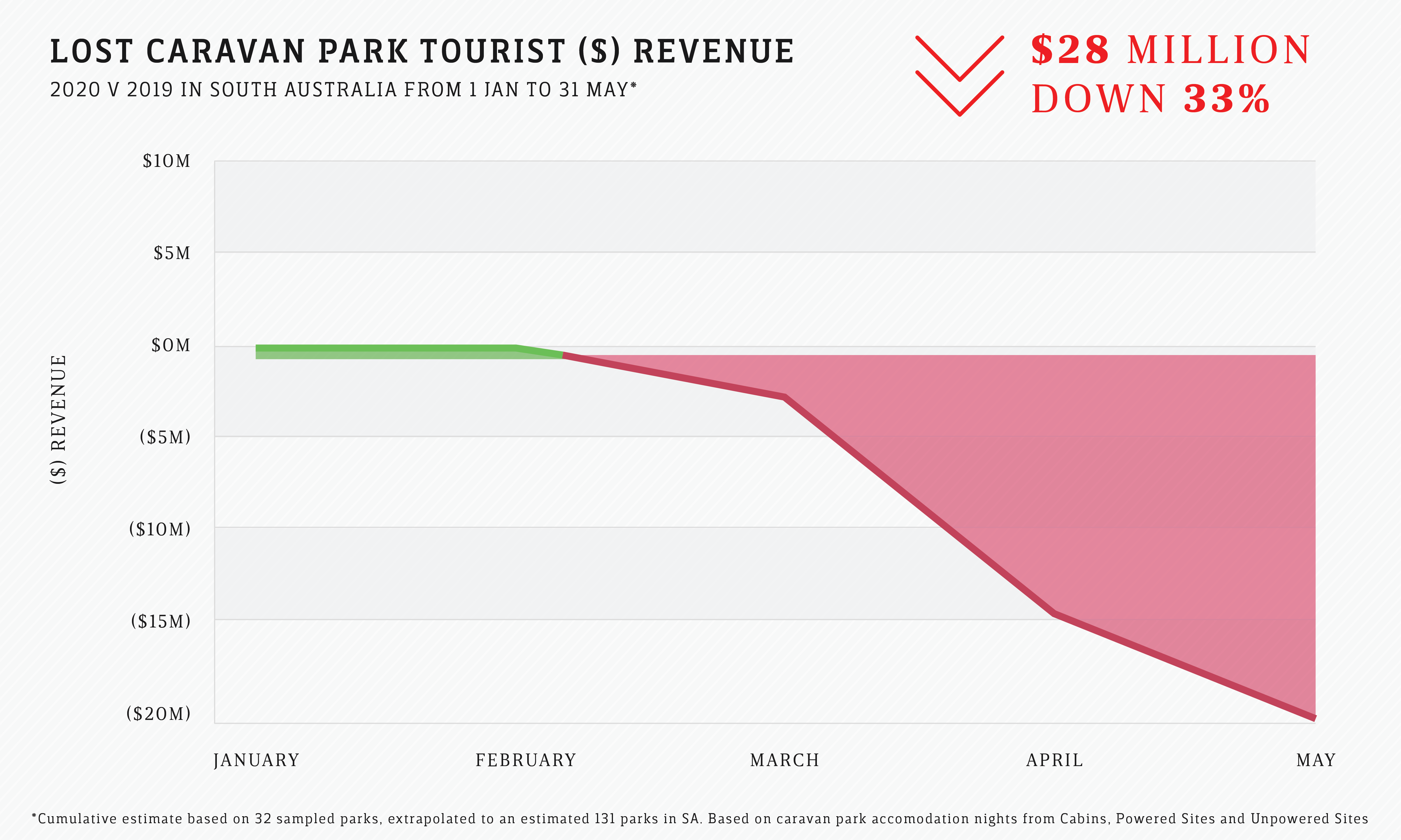 According to the data, caravan parks in New South Wales have led the recovery in recent weeks, narrowly ahead of South Australia.

Wilckens said this had been fuelled by a stream of Victorians taking advantage of the open border and heading north to NSW to “hunt the sun” as restrictions eased and winter approached.

“We are really seeing some confidence coming back to the industry and even though it’s winter here in SA and the borders are closed we are seeing that people are choosing to holiday in the state.

“The benefit of SA and NSW is they were very clear about what the easing of restrictions meant and what people could do.

“The problem in Queensland and WA was that they announced tourism was open but then they added all these restrictions such as zones or kilometres from home and as a result we didn’t see the uplift we saw here and in NSW.”

On Friday, Premier Steven Marshall announced SA would reopen its borders to other states on July 20, the day after local school holidays finish.

Wilckens said there were positive signs nationally for the coming months with his group receiving $180,000 worth of forward booking across Australia in a single day last week, its strongest day of bookings since coronavirus hit in March.

But he said there were some concerns that the opening of state borders could lead to more South Australians choosing to holiday interstate than interstate tourists deciding to visit SA, particularly during winter.

“As soon as we hit spring it will be different but from a South Australian point of view there is risk around that,” he said. 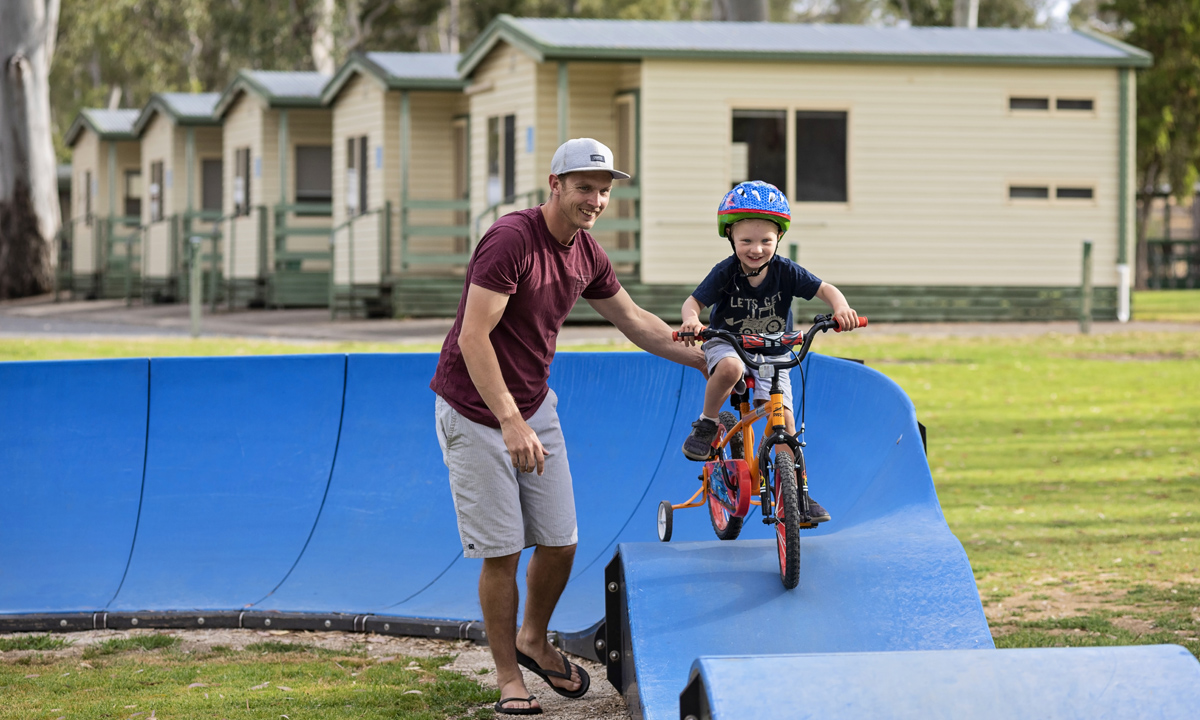 Big4 Port Willunga has qualified seven staff for JobKeeper payments and used the quiet times to renovate cabins and catch up on maintenance and general park upgrades.

Owner Dan Orken said the park was fully booked apart from a few unpowered sites on the June long weekend, which gave the business a much-needed boost after three tough months.

“April was pretty much a write-off with about 3 per cent occupancy and Easter is normally our second busiest time of the year,” he said.

“We do have some permanent residents so we had a bit of income but the tourist stuff was almost non-existent.”

Orken is optimistic that the worst is behind him and things will soon return to normal levels.

He said it was too soon to tell how busy the park would be in the July school holidays as winter bookings were often left until the last minute depending on the weather outlook.

“If we keep getting this sort of weather where it’s been cool but relatively sunny then it should be pretty good,” he said.

“With the travel restrictions easing it’s definitely helped and it will probably be better again when weddings are allowed to go back to 100 people or whatever because we get quite a few who might have their wedding in McLaren Vale but have a group of five or six families stay with us.”

“In caravan parks you can socially distance pretty easily because the sites are spread out and the cabins are self-contained so we might be in a better position than say a CBD hotel so we should be OK.”