While Whyalla is best known to South Australians as the location of the formerly endangered steelworks, further afield Whyalla has a reputation as the site of a unique and visually astounding undersea phenomenon. From May to August each year, more than 100,000 colourful Giant Australian Cuttlefish head to the Upper Spencer Gulf Marine Park for the only known mass aggregation of its kind in the world. After appearing on David Attenborough’s Blue Planet II, Totally Wild last year, this year’s breeding season is expected to attract a record number of tourists. The aggregation reached 150,000 in 2018 and has grown so popular it has spawned its own celebration, CuttleFest from 1 June to 31 August. It’s easy to swim with the cuttlefish in shallow waters just metres from the shore. Floating in a thick wetsuit in these cool waters, beautiful, constantly changing patterns and colours can be clearly seen streaking across the backs of the males seeking to attract a female partner. It is a mesmerising sight and entirely otherworldly – a reminder for South Australians of the mysteries that lie right at our feet.

2. Experience the colours of the Anna Creek Painted Hills | Flinders Ranges and Outback

Less than two decades ago one of the Outback’s most unbelievable sites was introduced to the general public. And even now – thirteen years later – the jaw-dropping formations and colours of the Anna Creek Painted Hills remain somewhat of a secret, with their exact location withheld to prevent curious travellers from walking on or driving across this pristine geological wonder. Flights from William Creek, Arkaroola, or Coober Pedy, though, are encouraged – especially on winter’s days when the desert changes from burningly hot to cool, clear and mild. These flights give detailed insight into this millennia-old natural wonder, which formed as a result of tectonic shifts that created hill spurs over which water flowed, interacting with minerals like iron and leaving behind beautiful red, yellow and white soils, sand and rocks. All these elements blend and contrast – creating an enormous abstract work of art.

A few years ago Forestry SA started conducting night tours through the pitch-black pine forests of Mt Gambier during winter – hoping to share with the public a special secret that lay within. “We thought we might get a few thousand people in a year,” says Forestry SA Conservation Planner Troy Horn. “And we’re clocking 20,000 in eight weeks already this year.” The unexpected surge in numbers is the result of the extraordinary nature of a fungus found nestled amid the towering pines. Growing over stumps, there are hundreds and hundreds of glowing Ghost Mushrooms. Sometimes prolific enough to cover hectares, each emits a green halo of light. “It’s just so spectacular. I’ve taken a lot of people out myself,” says Troy, “You hear a lot of gasps, and ‘wow!’, and ‘oh my gosh’. People are going out and seeing that and then telling others, that’s what gets so many people to the site.” Troy recommends visiting on a new moon or as the moon rises or sets to allow for the blackest possible backdrop for this unbelievable natural light show.

This year Australia’s biggest lake, Kati Thanda, is flooding with more water than it has contained since 1974 and Australian Wildlife Conservancy CEO Tim Allard told InDaily it was a not to be missed moment of South Australian history. “When you see the water eventually making its way to Kathi Thanda-Lake Eyre, across the cracking clay soils, filling all those little cracks and rivulets across the expanse of Lake Eyre, it’s nothing short of a miracle,” he said. “Lake Eyre is one of those once in a lifetime events where people should get out there and have a look.” The 9,500 square kilometre Kati Thanda is normally completely dry but every eight years or so the lake partially fills and the appearance of water prompts a complete transformation in the desert landscape, which goes from barren plain to a blooming, green oasis filled with breeding birds, fish, and other wildlife. Charter flights are an amazing way to take in the breadth of one of the World’s top natural wonders.

It is profoundly difficult to locate the point where peacefulness, connection with nature and awe intersect. The problem might be that finding the right spot involves being both geographically and temporally accurate; it is only in the winter months that the cliffs overlooking the sea at Head of Bight become a theatre for one of the most joyful shows on Earth as the Southern Right Whales and their calves cavort through the waters. These enormous creatures are one of the most powerful reminders of nature’s majesty and the sheer cliffs that fall suddenly from the flattened plains of the Nullarbor, straight down to the ocean waves, is one of the most epic places anyone can watch them.

A hit of adrenaline instantly warms you on a cold winter’s day. And few things stimulate an adrenaline rush more than coming face to face with one of the world’s most powerful predators. During the Monarto Zoo’s Lions 360 experience, visitors come within centimetres of the big cats lying on the mesh enclosure. Those needing an extra bit of fear-induced warmth can opt to be part of the hand-feeding add-on that can be included in the tour, which guarantees a highly intimate (but still safe) encounter with the sharp, sharp teeth of the lions. Not only is this proximity with lions an essential for any daredevil South Australian’s bucket list, it is also an excellent opportunity to learn more about these majestic creatures who are challenged by habitat loss and dwindling wild population numbers.

7. Float over the Barossa in a hot air balloon | Barossa

The mist rises over green hills and rows of bare vines and the big red balloon rises with it. The fire that propels the balloon to float upward also warms the passengers suspended in the basket beneath, each of whom is caught in a moment of surreal suspension. Those travelling in a hot air balloon know they are rising and shifting however the wind takes them, but feel as if they are not moving at all. It is more like the bonds of gravity have been loosened for a moment, allowing for a drift up into the clouds that formerly hung fluffy and full above. This drifting offers an unpredictable and breathtaking view of South Australia’s best-known wine region that reaches all the way to the distant ocean. In these ways, the sensation of hot air ballooning is completely unlike all other air travel – it is gentle and subtle and happens in combination with the environment’s natural forces, and must be experienced to be understood.

Exploring the whole of Australia is incredibly time consuming and expensive, but South Australians have a shortcut to experiencing some of the country’s most compelling and diverse landscapes. The Kangaroo Island Wilderness Trail is a five-day hike that winds through woodland to coastal country and then into scrub while taking in multiple natural wonders – including Admiral’s Arch, the Kelly Hill Caves and Remarkable Rocks. The Trail’s daily hike length of about 12-14km is easily manageable on temperate winter days and around each corner is a new example of the abundant wildlife – from echidnas, to kangaroos, koalas, sea eagles, goannas and even sea lions.

9. Soak in the warm water of the Dalhousie Springs desert oasis | Flinders Ranges and Outback

The Dalhousie Springs are a surprise set of waters found amid an otherwise arid section of desert in far north South Australia and a place where swimming is encouraged – especially in winter. Fed by the underground springs of the Great Artesian Basin, the water in this chain of ponds sits at around 38 degrees. In the middle of a winter’s day, or as evening sets in and the cold dry air of the desert begins to rapidly lose its warmth, slipping into these steamy waters is magical. It’s a perfect, revitalising natural bath surrounded by rare and beautiful wildlife, made all the more delightful by the endless arid red dirt landscape. 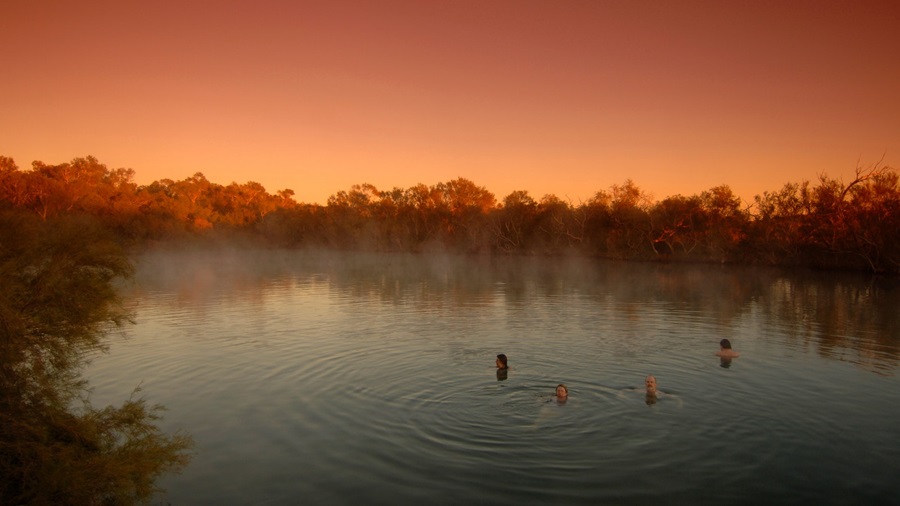 10. Skydive over Lake Alexandrina and the Coorong | Fleurieu Peninsula

Freefalling from a plane in the sky is on many people’s bucket list and the advantages of undertaking this exhilarating activity in your home state are threefold. Firstly, there are plentiful available friends and family on hand to make sure you don’t back out. Secondly, those same friends and family can drive you home afterward, allowing you to have a bracing drink to steady your jelly legs after you land. Finally, skydiving at home offers a whole new perspective on where you live. Similar to the strange emotional tugging that occurs when Adelaide’s rolling coast and gridded streets come into view when returning home on an flight, floating above a landscape while skydiving brings intense poignancy to sights that were formerly every day. As the air rushes past and you gain a new perspective on the Coorong, Lake Alexandrina and Langhorne Creek’s vineyards, South Australia’s real nature is clearly revealed. And in winter, SA Skydiving says these sights are particularly magical. “Contrary to popular belief, winter is the absolute best time of year to go skydiving. Green lush grass, Lake Alexandrina shimmering in the distance under a brilliant winter sun, the Coorong alive with wildlife, and a warm firing burning in the clubhouse.”

Solstice Media has partnered with the South Australian Tourism Commission to tell South Australian’s the reason why they need to take their next holiday in their own state.