German Chancellor Angela Merkel announced she would not stand for re-election again, after being a towering figure in European politics for more than a decade.

An enormously popular leader at her peak, in recent state elections it became all too clear that Merkel had become an electoral liability for her party. She had been safe when it was just the lunatic right wing of the so-called Alternative for Germany Party (AfD) that demanded her exit. But now that her once unassailable grip on centrist voters has loosened, she had no choice but to go. Her term will end in 2021.

What next for Germany?

Currently, the idea is that Merkel will allow the next generation in her party, the conservative Christian Democratic Union (CDU), to refashion its approach to Germany’s domestic problems while she continues to represent German and European interests abroad. Whether her successor, who must rebuild the electoral base of the party, will allow her to stay that long remains an open question.

Who the CDU chooses will reveal just what the party’s preferred strategy for rebuilding will be. The AfD has admitted it will struggle for relevance if the CDU elects immigration critic and arch-conservative Jens Spahn as leader.

And the Greens will lose centrist voters if Merkel’s favourite, Annegret Kramp-Karrenbauer, emerges as the next CDU leader. The only other current serious contender is serial corporate board member Friedrich Merz. He left politics in a fit of pique after being sidelined early in Merkel’s reign, but has now returned. 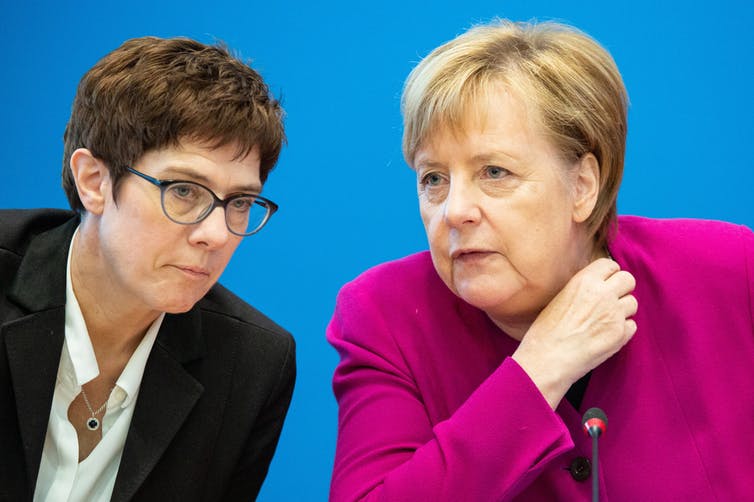 Merkel’s waning popularity has not only left a vacuum within the CDU but also in the other traditional governing party, the Social Democratic Party (SPD). The SPD was domesticated and ultimately rendered irrelevant by Merkel’s tactic of forming coalition governments with it.

The SPD is arguably now a minor centrist rump party rather than the social democratic juggernaut it was at its strongest. Its current death spiral is just as important a part of Merkel’s domestic political legacy as milestones such as marriage equality, the end of compulsory military service and an obstinate refusal to allow any national debt, even in good economic times, to pay for infrastructure.

Internationally, Merkel is seen in both European and global affairs as having been a stable, calming influence in the volatile age of Donald Trump, Vladimir Putin and Xi Jinping, who in their own ways have approached the global status quo with dissatisfaction. Compared to them, her approach has certainly been cautious, indeed often deliberately reactive.

Yet there has been an overarching logic to her foreign policy. Merkel has used the existing structures of international power such as the United Nations and the G7 and G20 to coax reluctant nations towards international norms. Her assumption has always been that global order and stability best serve Germany’s international and economic interests.

But she has rocked the boat herself on occasion. Her laudable (if reactive) 2015-16 intervention to allow more than a million war-ravaged refugees to enter Germany will be the one thing that will see her remembered in 100 years. Post-Assad statues of Merkel in the squares of Damascus and Aleppo are not hard to imagine.

But the move surprised and angered many neighbouring countries, particularly those that were subsequently leaned upon to both close their external borders on behalf of Germany and take in a share of “Merkel’s” refugees.

Certainly, no statues of Merkel will be erected in Athens. She will be less fondly remembered by Greeks for imposing Germany’s hard-line stance on debt refinancing. Many in southern Europe (and elsewhere) viewed this as exacerbating the debt crisis so as to assist northern European, and particularly German, banks.

Merkel’s almost evangelical stance on fiscal rectitude has not mellowed, nor has her cautious approach to furthering European Union economic integration. In a move seen as shoring up German economic sovereignty and interests, she famously rebuffed French President Emmanuel Macron’s ambitious plans to further bind the EU together financially. Merkel insisted that EU finances remain the preserve of intergovernmental negotiations and not that of a supranational EU treasurer.

On the other hand, a desire to defend the European project has motivated Merkel’s approach to Brexit, which stunned her as much as every other German. Some British pundits confess amazement that she hasn’t yet fixed their self-imposed problems for them, but Merkel has shown no inclination to pull Britain’s chestnuts out of the fire for them.

Beyond Europe, she is seen as having worked reasonably well with Putin, probably because she has demonstrated an understanding of Russia’s concerns about an EU and NATO that comes right up to its borders. Merkel was one of the few leaders at the NATO summit in Bucharest in 2008 who opposed US plans to bring Ukraine and Georgia into NATO immediately.

Certainly, it was Merkel who was seen as indispensable when Russia annexed Crimea. She maintained a fine line between condemning the annexation and convincing Putin to go no further against a weak and exposed Ukraine.

Although she was friendly with President Barack Obama, under Trump the US has become everything that the pro-order, pro-status-quo Merkel cannot abide. The feeling is famously mutual. Trump routinely points to German prosperity and stability as a dire warning of what might happen to the US if modest measures towards equality and humanitarianism were to be embraced. The contrast between the images of Merkel’s response to Syrian refugees and Trump’s virtual declaration of war against a modest band of Latin American refugees could not be greater. 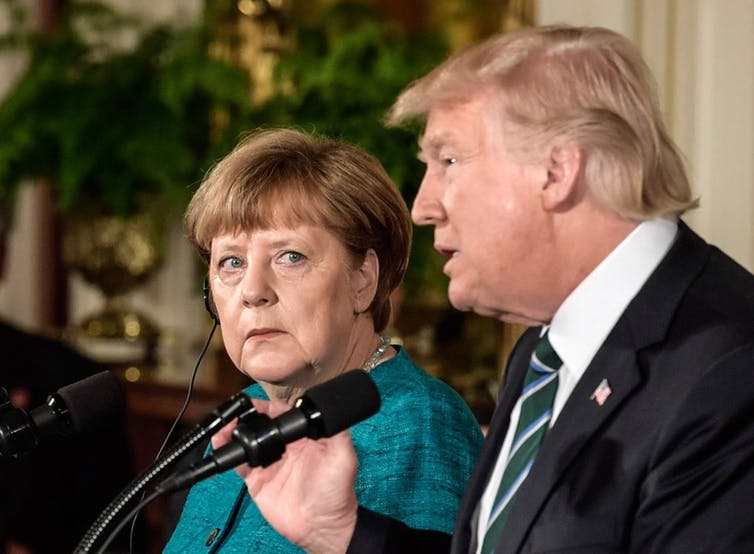 As Trump continues to set fire to the organs of international diplomacy and the US races towards self-selected imperial decline, Merkel has continued to build new and often surprising international networks. When Trump began a trade war with China and threatened Iran with annihilation, Merkel not only visited Beijing but also very publicly sought Chinese assistance to counter American sabre-rattling in the Persian Gulf.

Merkel is also working with France’s Macron, Turkey’s Erdogan and Russia’s Putin on the question of peace in Syria. It’s a quartet that very pointedly does not include the once indispensable US (let alone post-Brexit UK).

Merkel has also leapt towards new opportunities in Africa. Whereas Trump might disparage African countries as “shitholes”, Merkel’s approach has been active engagement. This week she hosted 12 African leaders in Berlin to bolster Germany’s standing in Africa. Germany has also publicly atoned (if not paid compensation) for its colonial-era misrule in Africa.

Alongside this, German troops are quietly working away in Mali and Sudan (as well as other far-flung destinations such as Afghanistan, Kosovo and Lebanon).

Merkel’s courageous stance in favour of refugees will be remembered, as will her inflexible approach to European economics. But what will probably be forgotten is the extent to which she has taken economic engagement with Asia and Africa seriously.

As a technocrat rather than a conviction politician, she will leave the chancellorship believing that Germany’s best chances lie in engaging with the coming economic powers and avoiding injury from the decline of the US global order.