Leonard Bernstein, whose centenary we celebrate this year, was possibly the greatest advocate and advertisement for classical music of our lifetimes. His volcanic energy was palpable as host of the Young People’s Concerts telecast in Australia when Channel 10 (‘O’ as it then was) first started. Even then (in the 1960s), we knew of the American’s vast range of activities as conductor, educator, composer.

He was the music director of the New York Philharmonic who composed orchestral music that befits the Great American Songbook. His biography could easily be regarded as a lens through which to view the cultural history of the USA in the 20th century.

Leonard Bernstein was born in Lawrence, Massachusetts, to Samuel Bernstein and Jennie Resnick. His father worked in the beauty supply business and both parents worried over the precariousness of a musical career for their son.

“How could I know my son was going to grow up to be Leonard Bernstein?” Sam is supposed to have shrugged in explanation years later.

Bernstein first came to national attention when, on November 14, 1943, he filled in behind an indisposed Bruno Walter for a New York Philharmonic concert of Schumann, Strauss, Miklós Rózsa and Wagner that was broadcast in the US, coast-to-coast. He had already composed his substantial Symphony No.1 “Jeremiah”.

Fancy Free (1944) was the first of Bernstein’s three ballets (before Facsimile and Dybbuk) with choreographer Jerome Robbins. It concerns three sailors in New York on wartime leave. They vie – and dance competitively – for the attentions of two girls.

Designer Oliver Smith thought the show could be turned into a musical about three sailors on the town and the plot was then lengthened through a chase device that accumulates more and more participants.

But Fancy Free introduced what would become a trademark of Bernstein – the unselfconscious blending of classical music with American popular traditions. As Carol J Oja wrote in Bernstein Meets Broadway: “When the curtain rose on the first production of Fancy Free, the audience at the old Metropolitan Opera House did not hear a pit orchestra…Rather, a recorded vocal blues wafted from the stage…”

In that first production it was the voice of Bernstein’s sister, Shirley, that they heard. Later, Billie Holiday heard the song, liked it and recorded it.

For On the Town, the musical that grew out of Fancy Free, Bernstein brought in his two friends, the lyricists Betty Comden and Adolph Green. On the Town takes the initial premise of three sailors on “liberty” but complicates and deepens the Fancy Free storyline.

There is still plenty of Bernstein’s trademark use of America’s musical vernacular – “I Can Cook, Too”, sings Hildy in a scat number, having persuaded Chip back to her apartment – but these three sailors aren’t just chasing “broads”: Gabey’s looking for genuine love (“Lonely Town”) and at the end, at dawn, they return to their ship speculating whether they’ll meet their friends ashore some other time. Here is one of the earliest instances of a Bernstein musical’s special ability to express depth lightly and entertainingly.

The show ends with a reprise of the swaggering “New York, New York” tune. Three new sailors arrive for 24 hours’ leave, but who knows what life holds for our original three (it is 1944 – wartime – after all).

Bernstein longed to be regarded as a great symphonist, perhaps like Mahler, the composer whose music he played such an important role in reviving. But Bernstein’s “serious” music often risks excessive earnestness. That’s not a problem with the musicals set in New York. There is real lived-in depth to these works with their convincing bounce and sizzle.

So, city life for Bernstein; not for him the wide, open spaces of “Big Sky” America or the square tracts of suburbia (or Sam and Jennie Bernstein’s life)!

Trouble in Tahiti, composed in 1952, is the one work on this weekend’s program that could be called an opera. This concert’s selections give some sense of its tone and subject – the sad portrait of a stale marriage. Dinah seeks relief in a stupid movie set in Tahiti knowing that tonight she and “Sam” must talk about their tensions. Meanwhile, Bernstein achieves an almost Mozartean lightness of touch through the device of a “Greek chorus”, a trio, who narrate in the manner of Eisenhower-era commercials for Halo shampoo or Texaco oil. Bernstein’s own libretto proves that intelligent dialogue flowed out of him as readily as tunes.

Wonderful Town (from 1953) is another of Bernstein’s works to be set in New York, this time Greenwich Village, an exciting, intimidating beacon to two young mid-western girls – an aspiring writer and aspiring actress. Comden and Green again wrote the words and although the work never quite achieved the acclaim of On the Town or other Bernstein musicals, it contains some great numbers. And there is a sense of wider America out there, as when homesick Ruth and Eileen wonder why-oh-why-oh they ever left Ohio.

The gestation of Bernstein’s next music-theatre piece in a sense dramatised his constant vacillation between Broadway and the so-called “serious” stage. Candide was based on Voltaire’s 1759 satire of Enlightenment optimism.

Candide, the hero, attempts to maintain his mentor’s philosophy that “all is for the best in this best of all possible worlds”, even after all sorts of setbacks including earthquake and the Spanish Inquisition and losing (temporarily) his beloved who is prostituted and raped… Lillian Hellman, who wrote the original book, intended the musical as a critique of Eisenhower’s America, but her earnest approach sat oddly with music that poured out of Bernstein faster almost than a storyline could frame it.

At first, Candide flopped, even though its Original 1956 Cast Album became popular. There were several revisions (ultimately involving six lyricists and three or so new scripts). 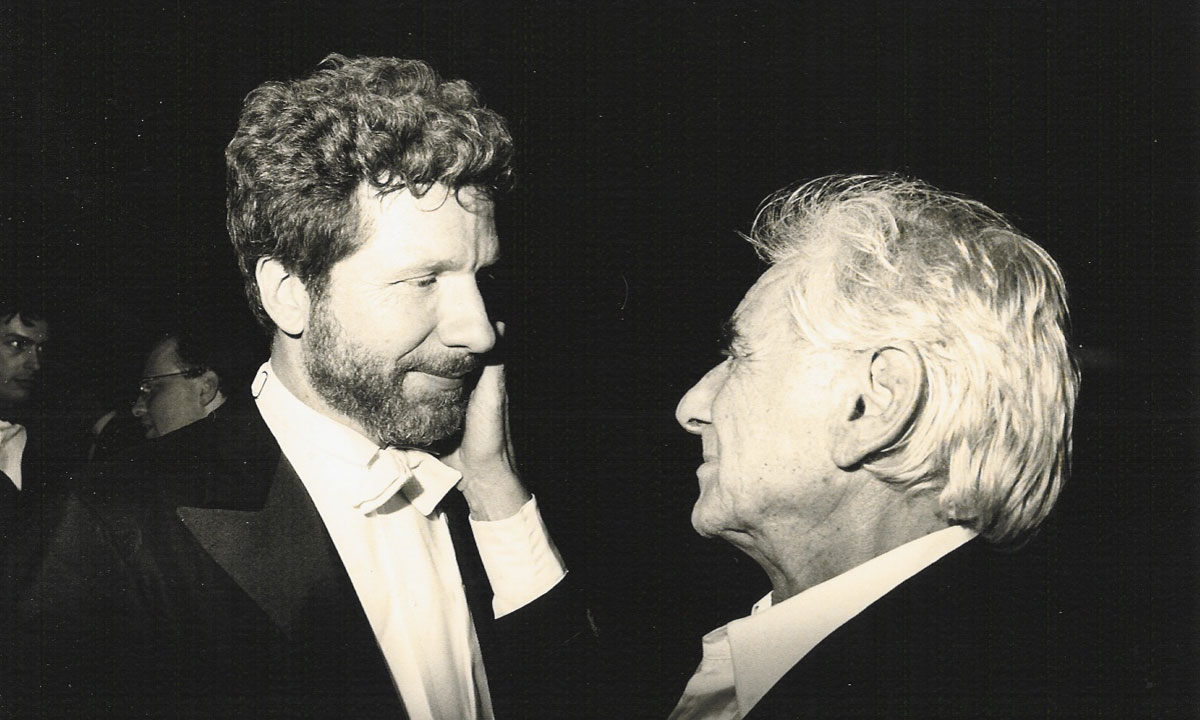 Conductor John Mauceri, who will present Bernstein on Stage!, with Leonard Bernstein in 1983.

At the Scottish Opera, John Mauceri worked on a version which served as a basis for Bernstein’s “final revised version” recorded by Deutsche Grammophon (DGG). Ultimately this “musical” became a staple of 20th-century operatic repertoire. Its overture was always, though, the “best overture for a Broadway show ever” (in critic Mark Swed’s recent words); “Glitter and Be Gay” adorns the repertoire of many coloratura sopranos; “I Am Easily Assimilated” reveals Bernstein’s brilliant verbal wit (as one of the show’s many lyricists), and the finale “Make Our Garden Grow” is moving, even though its “we’ll do our best” philosophy scales down Candide’s original optimism.

The 1950s continued to see Bernstein’s greatest contribution to the Broadway stage.

If we think of American music as typically infectious, brash and exciting while accessible, simple and touching, then West Side Story (1957) is surely one of America’s greatest scores. It has real urban heat, a grasp on the rhythmic springboard that is American popular music – and all from the pen of the music director of the New York Philharmonic.

The idea for the show originated in 1949 when Jerome Robbins approached Bernstein and playwright Arthur Laurents with the idea of a Romeo and Juliet story about a Jewish boy and Catholic girl on New York’s lower east side. By the time the collaborators got to work, the friction had become one of love between Tony, the American descendant of Polish forebears, and Maria, the daughter of recent, despised Puerto Rican immigrants – on the west side. Tony falls in love with Maria at a dance at the local gym (“Maria. The most beautiful sound I ever heard”, in Stephen Sondheim’s words) and risks danger to visit Maria on her tenement balcony (“Tonight”), but their love will be short-lived against the violence of rival ethnic gangs.

The Puerto Rican element provided Bernstein with spectacular opportunities to infuse the score with Latin American dance-energy, as in “Mambo”.

Mass, from 1971, reminds us that Bernstein the composer could traverse a broad range of styles, no doubt inspired by the vast repertoire he conducted. Critic Harold C Schonberg once compared it to a “steak fried in peanut butter and marshmallow sauce”, yet, as Rebecca Schmid recently pointed out in a recent Wall Street Journal, the Celebrant’s invitation in “Simple Song” to “Sing like you like to sing” explains the inclusion of rock, 12-tone technique, classical references and Broadway.

Mass is one of Bernstein’s most popular pieces possibly because it knows what it is – a high-aiming musical. Commissioned by Jacqueline Kennedy Onassis for the opening of the Kennedy Center, Mass is a hippy-era exploration of faith, complete with Godspell-type characters (the librettist was Godspell’s Stephen Schwartz, later to write Wicked) within the context of the Latin mass. Actually, its eclecticism is part of a time-honoured American tradition. And if you’re not offended, it’s catchy and coheres.

Though he was always political, the late 1960s and 1970s saw some of Leonard Bernstein’s most overt political statements. He was a prominent supporter of Eugene McCarthy’s campaign in the 1968 presidential primaries, and he drew 15,000 people to Washington’s National Cathedral for a performance of Haydn’s Mass in Time of War, competing with Richard Nixon’s second inaugural.

This was proud patriotism in the days when it was patriotic to be proudly liberal. And patriotic tribute was the intention behind his US Bicentennial contribution, 1600 Pennsylvania Avenue. A collaboration with Camelot’s Alan Jay Lerner, this should have been a hit. “Only two titans could have had a failure like this,” said Jerome Robbins.

Part of the problem was the premise: the biography of a house, the White House at 1600 Pennsylvania Avenue, as it stood witness to a history of race relations. There was a large cast of characters including Thomas Jefferson (who filled the house with genius even when dining alone, to paraphrase President Kennedy), but a single, empathetic protagonist? Plenty of fine music, though, ended up in a concert piece, White House Cantata, that was recorded by DGG in 2000.

Leonard Bernstein was powered by a love of music which he breathed in like air. He imbibed life voraciously. But he also smoked several packs a day. Exhausted by emphysema, he gave his last concert at Tanglewood, Massachusetts, on August 19, 1990, and died not long after; not long after the music-making had stopped.

But look what he left behind! There is a whole other repertoire that hasn’t been touched on here: symphonies, concertos that Bernstein longed for audiences to take more seriously. But Bernstein also blessed the 20th century with music that was as physical on the page as in the videos you can see of him conducting, music that was sheer joy.

The music Bernstein wrote for Broadway is among America’s and the 20th century’s, greatest. A hundred years after his birth, we can see that it may continue for all time.

This article was commissioned by Symphony Services International for the Adelaide Symphony Orchestra.

The Adelaide Symphony Orchestra, in association with the Adelaide Festival, will present Bernstein on Stage! tomorrow and Sunday at the Festival Theatre. It will be conducted and presented by John Maucer, and feature soprano Lorina Gore, mezzo soprano Kim Criswell, tenor Luke Kennedy, bass baritone Rodney Earl Clarke and the Adelaide Chamber Singers, with the program to include highlights from West Side Story, On the Town, Trouble in Tahiti, Wonderful Town, Candide.