It’s 10am on a Wednesday and Sean Connolly is behind the bar, fixing coffees for the crew he’s hired to maintain the decorative plants that line the outer rim of Sean’s Kitchen.

Once or twice a month, Connolly will fly into Adelaide to check on the restaurant and make any necessary adjustments – such as replacing the missing plants – before flying out to the next in his line of six restaurants located around the world.

“All I care about every time I come in is, ‘Is it the same picture I drew two years ago? Has it got the same look and feel? What’s missing? What’s not?’ Eye for detail,” he says.

There is an art to creating freestanding restaurants housed within larger environments, like the Adelaide Casino, and this has been Connolly’s specialty for the last 15 years, ever since being offered the Astral in Sydney.

“I met a guy called Jim L’Estrange, he was the CEO of the casino in Sydney. He was a cross between Donald Trump and Steve Irwin – you never knew if he was going to sack you or wrestle you to the ground – but I would say he is the man that turned my career around,” Connolly says.

Now that Connolly runs six restaurants internationally, maintaining his miniature empire is a seven-day-a-week job, but it’s a lifestyle to which he is accustomed. His work life began at 10, running a paper route in Yorkshire, before starting his first kitchen job at 13, making prawn cocktails for a five-star hotel. By the age of 19, Connolly was working aboard the QE2, a job that would eventually lead to docking at Sydney Harbour in 1986.

“I got off and went to Bondi and I thought, ‘This is as far away from Yorkshire as I could possibly get; it’s bright, it’s sunny, and they all speak English – how good is that?’” he laughs.

Connolly’s relationship with Adelaide started a decade later, after a road trip through Central Australia led him to Adelaide’s Central Markets.

“We went through Uluru, went through Coober Pedy – that was awesome – got down to Adelaide in this little campervan, and I couldn’t believe the Markets. It was like an oasis,” he says.

“We had a little grill in the back of the truck, and I think we made a cauliflower cheese. It was the best cauliflower, it was the best cheddar, South Australian cheddar – oh my God, it was bringing tears to my eyes.

“It was just pretty special. That was 25 years ago.”

Through this experience, Connolly recognised Adelaide as the beating heart of Australia’s restaurant industry.

“You just know that South Australia is the food bowl of the country,” he says.

“It goes without saying, all the good stuff comes out of here. And all the cool cats – you speak to any cool cats in Sydney and there’s a lot of them that come from Adelaide. You can just pick them.”

The opportunity to set up in Adelaide came in 2014, but Connolly had been eyeing the spot that would eventually become Sean’s Kitchen for four years prior.

“I just kept coming back to this. It had great bones, it’s got the frontage I want; [it has] this kind of feels European to me – it’s beautiful European architecture, it’s got amazing 20-foot vaulted ceilings. It’s just something quite special,” he says.

With so much in-built character to work with, Connolly decided to create a thematic American brasserie – the bench seating and outdoor lamp-style lighting evoke a stylised image of New York.

“You walk in here, it’s like a film set, right? Or what you imagine New York to be like… it’s kind of got the New York, American-French vibe going on,” he says.

Elsewhere in the venue, preference is given to comfort, rather than drawing from a particular theme.

“This is a prawn cocktail and chicken and chips restaurant, and that’s what I want,” Connolly says.

“I call my menus popularist, because your mum and dad, my mum and dad, they can just come in and they’ll recognise everything on the menu. It might have a little small twist, but nothing too jarring.

“The art [of menu design] is in less is more – I don’t hide behind any flowers, any bubbles, any smoke, any foam. I literally find the best chicken from the best farmer, and we cook it respectfully with as much love as possible, we just put in on the plate and let everything speak for itself. That’s my art. It’s minimalist.” 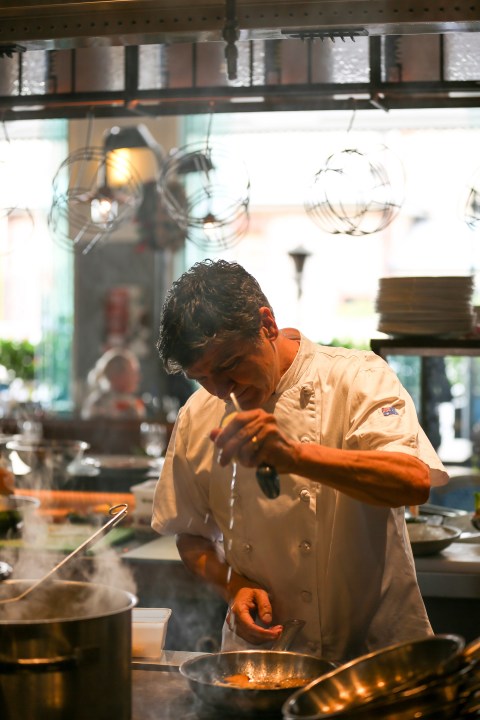 It’s a formula that resonates well in Adelaide’s current culinary landscape, where an explosion of small venues has created a scene full of home-style owner-operated restaurants.

Connolly doesn’t boast about where he sees Sean’s Kitchen sitting in that landscape, and says he’s just “humbled to be here”.

“I think Duncan [Welgemoed] from Africola is very special; I think Jock [Zonfrillo] from Orana is pretty special, too, doing great things for the industry. Paul Baker from The Botanic, he’s a wonderful boy, you couldn’t get more humble than him, I tell you. He’s a knockabout bloke. And Clever Little Tailor really rock it, very clever boys, so it’s just exciting,” Connolly says.