Scientists at Flinders are developing a growing line-up of lab-based experiments to extract valuable minerals from ore using environmentally-friendly microbes, such as bacteria commonly found on mine locations.

“We are using advanced technology to identify the specific naturally occurring bacterium which attach to each kind of mineral and modify its surface properties.

“This has the potential to be scaled up to one day replace toxic chemicals such as cyanide and xanthates now used to separate the minerals from ore in the early froth flotation phase of processing.”

Waste rock and chemicals left behind from the process is usually saved in large tailing dams.

For the first time, Dr Harmer’s team at Flinders Chemical and Physical Sciences has used high-tech X-ray imaging and micro-spectroscopic methods at synchrotrons overseas to study the distribution of chemical species responsible for the selective attachment of bacteria and the separation of minerals.

They also have used the extreme light beams of the Australian Synchrotron and synchrotrons overseas to identify the chemical mechanisms of bioleaching of chalcopyrite, or copper ore, using soft and hard X-ray spectroscopies.

“The capability for microscale spectroscopic analysis of materials while in liquid under controlled electro-chemical conditions is helping to confirm which bacteria attach to specific mineral surfaces for the application of mineral leaching and separation of minerals without the use of toxic chemicals,” Dr Harmer says.

“We have been testing the prototype electrochemical solution cell in collaboration with scientists from the Canadian Synchrotron, and we’re looking forward to expanding that project in future.”

Dr Harmer says the small-scale experiments could be scaled up in trials by mining companies to extract ores more sustainably.

This would, in turn, start to reduce the toxicity of tailing dams on mine sites and meet the long-term challenges of environmental remediation of mine sites around the world. 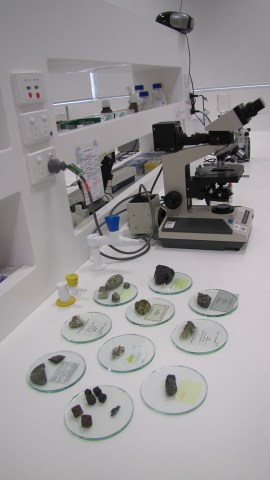 Toxic by-products from mining and ore processing continue to plague the mining industry – and the environment.

Mining company Samarco, which is half-owned by BHP Billiton, has agreed to pay the Brazilian Government $US2.3 billion ($3.2 billion) for a dam collapse that killed 19 people in November last year.