Several attendees at the Friday night event at Norwood Town Hall have told InDaily that there was open incredulity towards parts of outgoing Liberal leader Steven Marshall’s farewell state council address, in which he insisted the party would have picked up seats – instead of losing seven – if the election had been held last year, but conceded he “should have played the politics better”.

But the evening ended after the president of the Waite state electorate conference, Malcolm Post – whose seat was lost to Labor after the party refused to re-endorse exiled incumbent Sam Duluk following his basic assault acquittal, prompting him to run as an independent – approached the stage and hurled expletives at Davis, accusing him of threatening to sue him for defamation.

InDaily has been told by multiple witnesses Post called Davis a “piece of s***” amongst other expletives.

“There was f-words in there as well – it certainly got quite heated, and certainly had people on edge,” said one attendee.

According to one witness, Post – a former longtime staffer with various MPs – was concerned “he’d been fobbed off about concerns he’d raised”.

“You could cut the air with a knife [but] this behaviour did not help any future or further discussion,” the observer said.

It’s understood the spray was ruled “out of order”, with the meeting immediately terminated. 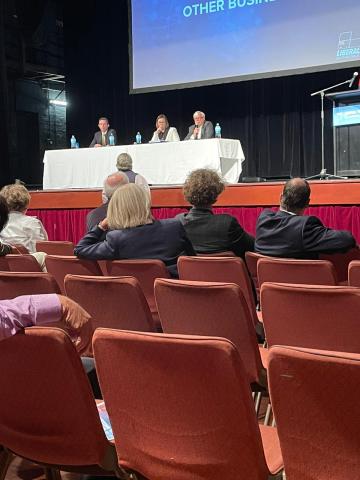 A photograph of the incident. Photo: Supplied

State council delegates were told, as forecast by InDaily on Friday, that the election shellacking would be reviewed by former federal president Brain Loughnane, who also conducted an inquiry into the SA party’s shock 2014 defeat.

But attendees were discouraged from raising their own concerns and questions about the election result, with an email from Davis before the meeting insisting the review process was “the most effective way to channel all comments about the Election Campaign for appropriate action and for recommendations to be made”.

“ The 2022 State Election loss has been deeply disappointing for us all,” said the email, which has been seen by InDaily.

“I am sure you worked hard campaigning and raising funds in the re-election of the State Marshall Liberal Government.  I thank you for your hard work and dedication to the Liberal cause.

“There are lessons that we must learn from the Election outcome.

“A formal Election Review is the best way to identify what caused the loss, what the party could have done better and importantly what should be done differently in the future.”

He said Loughnane’s 2014 review “gave the party clear recommendations which were acted upon and greatly assisted the successful election outcome four years later in 2018”.

“Party members will receive details about the review shortly and will be invited to provide feedback and suggestions… a dedicated email address has been established and will be circulated for this purpose,” Davis said.

An attendee said that questions about the party’s election performance were still raised on Friday night, but given short shrift – with one delegate suggesting this was an approach consistent with recent council meetings.

“I think people were looking for that opportunity, but it hasn’t been there for a long time – and it wasn’t there in any huge capacity for delegates to be able to ask those questions,” they said.

One delegate asked how members could trust the party leadership would listen to their concerns, which Davis is understood to have taken on notice – prompting a round of boos by “15 or so members”.

Another attendee said that Marshall told the meeting that “everything was fine up until halfway through last year [when] the public turned on us”.

They said state director Sascha Meldrum, who was also on the stage along with state executive member Simon Birmingham, read a prepared speech “essentially saying [that] we knew this is what was going to happen [but] we didn’t expect it to be this bad”.

According to two sources, Marshall told the meeting that “if we had run [the campaign] in the middle of last year we would have in fact won seats” but “maybe we should have played the politics better”.

He also thanked his former deputy Vickie Chapman and ex-Treasurer Rob Lucas “for their support of my leadership and my time as Premier” – which one insider says prompted “a significant proportion of council to start laughing”.

Davis is understood to have told the meeting that Marshall – who left the podium and the meeting after his address – had been “working very hard to find a number of his staff and members of the government jobs moving forward”.

It’s understood that both the Liberal MPs who have thus far nominated for the party leadership – Josh Teague and Nick McBride – attended the meeting, but presumptive candidate David Speirs did not.

Speirs is expected to confirm his candidacy as early as tomorrow.