Instead, his own seat is doubt – while his premiership is in tatters.

The revelation is telling in two ways: first, that the Premier, in such a tight campaign, was spending some of those last crucial hours dining with friends and supporters, instead of campaigning to swing last-minute votes. And second, that there was a serious flaw in the Liberal campaign if the most senior member of the party didn’t see Saturday’s trainwreck coming.

One victim of the election debacle wryly reflects that the latest chapter of SA Liberal Party failure shows the same lessons of its troubled history going unlearned.

“You look back at the last 50 years of the Liberal Party’s history in government, and it’s an exercise in great promise being dashed – very, very quickly and spectacularly,” says Steve Murray, a former party president who lost his seat of Davenport in the Labor rout.

He likens the last four years, culminating in the now-widely panned Liberal campaign, to the plot of Disney’s Fantasia, where an unsuspecting move unleashes an epochal swarm of unintended consequences. 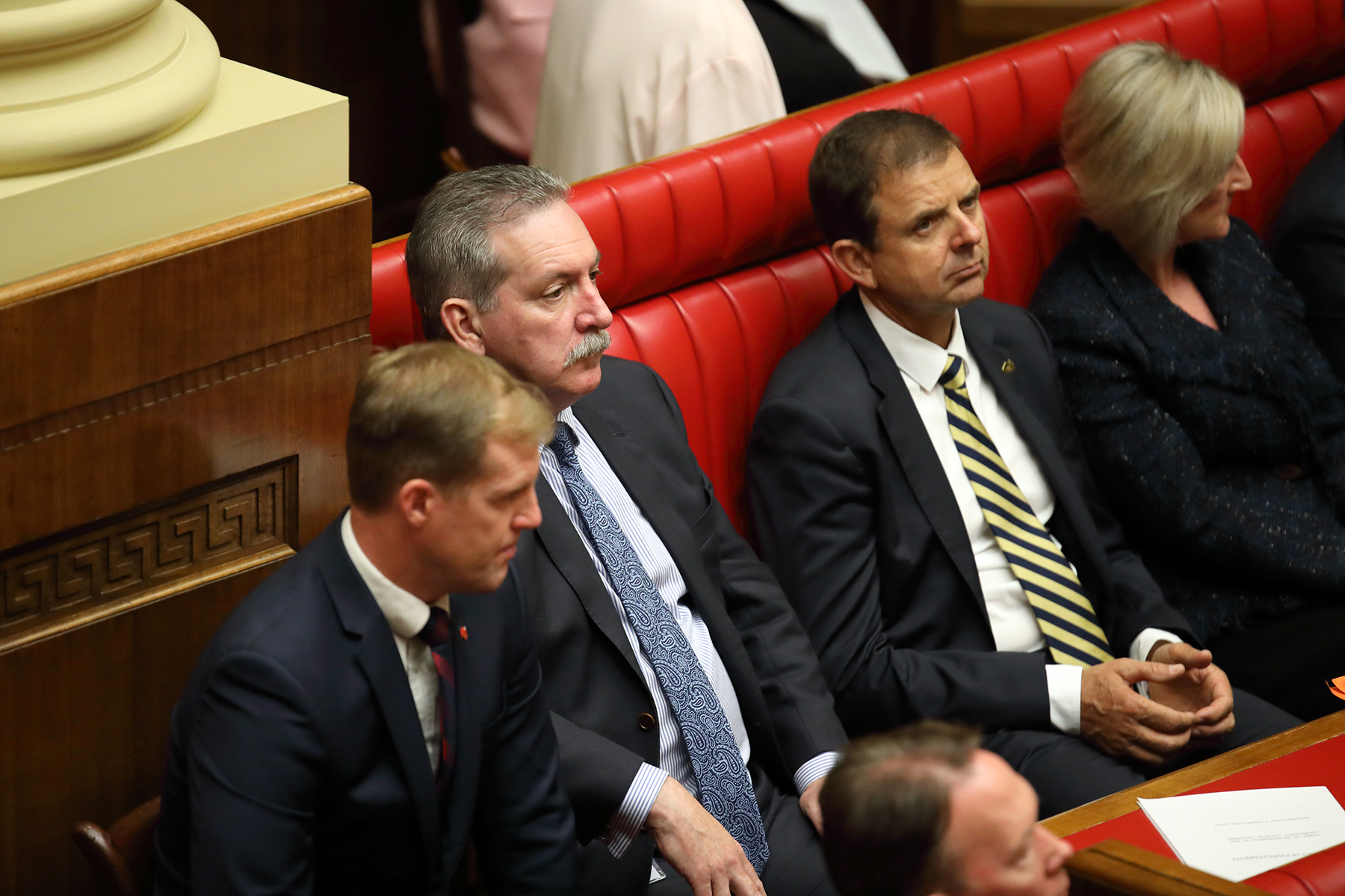 Another senior Liberal says Marshall “deserves credit for broadening the state’s economic base” and addressing cost of living pressures.

“But the negatives are that he ran the Government as if he was running a business, not a political party,” they said.

“He wasn’t attuned to having contrary advice – and he was in a state of denial.

“He was getting market research that he just didn’t believe in and he was dismissive of it… he’d go out and people would take selfies with him, walk across the street to meet him and all that sort of thing, and he took that as enormous support for what he was doing.

“He didn’t have many people who would argue the point with him in his office, that he’d take any notice of. He was just dismissive of market research [and] wouldn’t believe it.”

The roots of this self-belief may well stem from Marshall’s 2018 success, which allowed some in his inner circle to believe they had cracked a new code for election campaigning.

After their shock defeat in 2014, a huge investment in data analysis ushered in a vastly different campaign style, which the then-Opposition Leader detailed to InDaily in 2017.

“The next campaign will not just be incrementally different, but a step change,” he said at the time.

“People are very cynical about billboard slogans – what they want to see is what’s going to be important to them.

Marshall said that statewide messaging “didn’t resonate in 2014” and was “the old paradigm”.

“This concept of a statewide two-party-preferred vote informing strategy… those days are gone – we made this decision in March 2014… to do that groundwork, hearing what these [individual] aspirations are and addressing those issues one by one.”

This might explain why successive statewide polls predicting a Liberal wipeout failed to shift his campaign trajectory.

One insider says the seeds of the downfall came late in 2021 – particularly a border re-opening which Marshall announced to his party colleagues via a WhatsApp message. 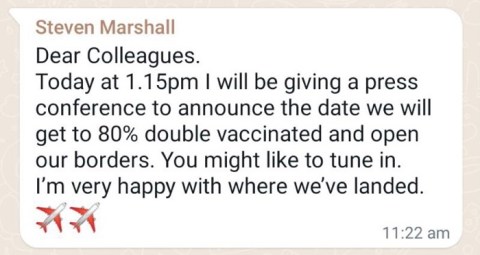 But other issues were digging into the Government’s poll standing, including a refusal to deal with the controversy surrounding his then-deputy Vickie Chapman and the erosion of the Government’s parliamentary majority.

“At that point, he wasn’t listening – and continued not to listen to the market research,” the source says.

“Dumping the V8s” was also seen as a major own-goal.

“That was a dumb decision, particularly in the north-eastern suburbs,” said one insider.

But the malaise went back much longer.

Marshall’s refusal to bring conservative MPs into the tent – instead leaving them marginalised – went against advice not just from the Right but from moderate confidants.

“He was told that was one of the main issues he needed to address,” said one.

A key insider said that had the election been held before October the Liberals “would have won easily”.

But instead, their support evaporated through the Christmas Omicron surge.

“When you look at it it’s an object tale of what happens in human nature,” says Murray.

Those, he says, include the “basketball stadium” – he pointedly uses the term adopted pejoratively by Labor – and a 2019 fight with many traditional Liberal supporters over land tax.

One of these, longtime member and Unley dental surgeon Timothy Goh, was subjected to vicious leaks in the national press.

“In what universe was it a good idea to pillory Timothy Goh?” says Murray. 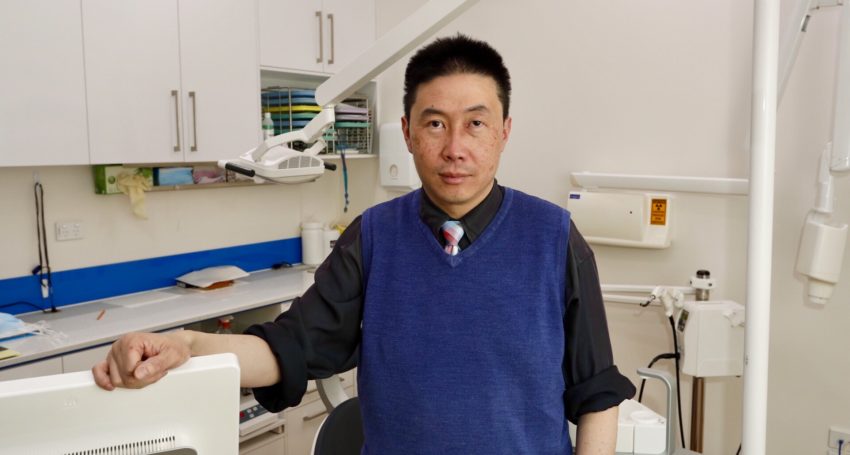 Timothy Goh in 2019. He and other disillusioned Liberals never forgave the Marshall Government for the land tax saga, with some working actively towards its demise. Photo: Tony Lewis / InDaily

“Two faced and treacherous. I believe you will regret the day you backed Labor. You will be taxed out of existence. Covid beat the Lib Govt is the reality.”

But many in the party believe the problems ran deeper.

“I don’t think Labor won this election – I think we lost this election,” says Mackillop MP Nick McBride, who has put his hand up to run for leader – despite threatening to quit the party and run as an independent as recently as late last year.

He said that episode highlighted “that I was more aware of the decision-making problems than anyone else in the party at a very early stage”.

“I saw the way the decisions were being made, and I really saw very quickly how this could end,” he said.

He says “we lost the election because people had expectations of a conservative Liberal Marshall Government” that were not met – by a long way.

Particularly “coming out of the pandemic”, with the November border opening, “our core base have been very, very frustrated with the level of leadership that they were looking for”.

He said tourism and hospitality small business owners were looking at the government thinking “why are you doing this to us? Don’t we belong to you any more?”

“It was that leadership style that ended up killing us in the last two to three months,” he insists.

McBride has been an internal critic of that style since entering parliament four years ago.

“It wasn’t like this was the only issue I’d had with the style of leadership of the government we were running,” he said, adding that his complaints “weren’t being answered at all”.

“They were trying to fob me off,” he says now.

“We’re doomed to repeat the mistakes of history unless we learn from them – and 50 years later, here we are,” he says.

He wants to see the Liberal Party adopt the ALP model of formalised factions, to ensure power and decision-sharing, instead of centralised control.

“Absolutely, because the reality is that works when you’re in government particularly,” he said.

“There’s this shibboleth about ‘the leader must have unfettered right to choose the team’ that’s a bit dated and fundamentally doesn’t work.”

He said some of those MPs marginalised in the party-room, including him, spoke up about this over the life of the government.

“There were plenty of them, and in particular [Dan] Cregan, [Fraser] Ellis and McBride,” he said.

“But if you’ve not got a system which includes and balances and respects those [ideological] differences, you end up with two choices – you either shut up and hope it gets better, or you leave,” says Murray.

He says the Labor system is “not perfect…but it does give voice to that diversity of opinion”.

“It works very well as a means of running the government in a functional and accountable manner.”

It’s understood Marshall met with Murray and others during the campaign to tell them he would be more accommodating of factional foes if he won a second term – a last-minute bid to impose party unity on a flailing campaign.

Murray doesn’t respond to this directly but says: “I’ve been making this point inside the party-room for a long time now… I think it’s fair to say he probably arrived at a similar view.”

That, he suggests, might have been prompted by the possibility of the alternative – “dealing with crossbenchers who are formerly Right-aligned Liberal MPs”.

“That might have helped as well I suspect,” he says.

Another likely leadership contender, former Environment Minister David Speirs, said the party, which had believed the election would be tight and was shocked by Saturday’s result – must now change.

“The South Australian Liberal Party is not going to be able to continue doing business as usual and there’s going to have to be significant reforms,” he told ABC Radio Adelaide today.

“When I say reform to the party, I mean the way the party operates, the way that it potentially works with its membership, picks candidates, makes decisions around policy, works out what it stands for.

“I really think that the party needs a root and branch review. This should not be a shock to anyone in the community nor my colleagues. Our party needs to work out what it’s all about and move forward from there because we just had an extremely poor result and … a result like this should demand a rethink.”