Swift is currently fourth on the Liberal senate ticket for the forthcoming federal election – and if she is successful in Boothby the party may have to scramble to replace her, despite the unlikely chance of it winning four senate seats.

But despite the campaign pedigree of Swift and Osborne, insiders believe the third nominee – education administrator Leah Blyth – is well placed to snare the preselection in the southern-suburbs seat, with the likely backing of the party’s Right faction.

Despite predictions of the proverbial “Melbourne Cup-field” of candidates, only those three put their names forward, with Marshall Government Environment Minister David Speirs opting not to nominate.

It’s likely he was lobbied by colleagues against doing so given the State Government’s already-parlous position in parliament, where it is effectively in minority government while two MPs sit on the crossbench awaiting separate criminal proceedings.

But it’s understood there’s also strong pressure within the party for a woman to be preselected in Boothby, given the circumstances surrounding Flint’s departure.

The incumbent backbencher, who held onto the seat by just 1.38 per cent at the 2019 election – announced in February she was bowing out, citing a series of events in which she was targeted, including having her office vandalised and a vitriolic campaign spearheaded by activist group GetUp.

It also followed a turbulent parliamentary period in which Brittany Higgins’ rape allegation shone a light on the workplace culture and treatment of women in parliament.

It’s understood senior figures in the party have argued strongly for Flint to be replaced by a woman candidate.

Osborne, a SAPOL detective who previously ran unsuccessfully against Flint for preselection in Boothby, was later the moderate backed-candidate in the federal seat of Adelaide in 2019.

But it’s understood the faction will put its weight behind Swift – despite her underwhelming showing in the recent senate ballot. 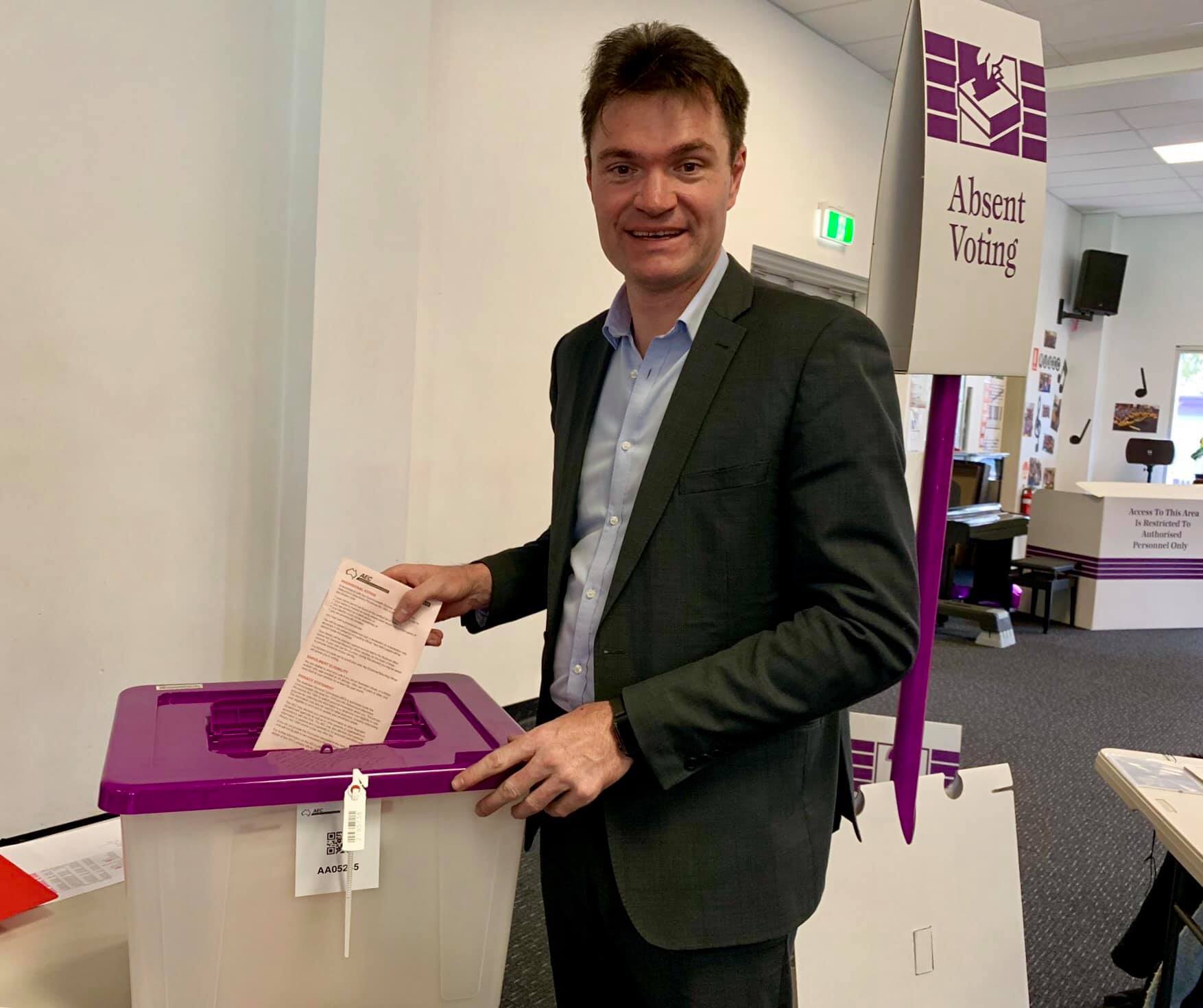 Shaun Osborne voting for himself in Adelaide. Photo: Facebook

Blyth, however, is being touted as a local alternative – despite living just outside the electorate, in Adelaide, according to party sources.

She did not respond to inquiries this morning.

A date for a ballot is yet to be finalised, with insiders tipping a vote in mid-May – which would allow Prime Minister Scott Morrison to include the endorsed candidate in post-budget media opportunities.

“I’ll be requesting we have a decent length of time to allow the candidates to speak to the 300-plus delegates,” he said.

“They need to be given a fair chance, around six to eight weeks, so we’d be looking to settle this by July.”

Some party insiders believe Flint will put her weight behind Blyth in the preselection, but Hepworth said the incumbent had not endorsed any of the three hopefuls and doubted “whether Nicolle will end up supporting anybody but the candidate the branch selects”.