The Upper House ballot, which saw incumbents Kyam Maher, Ian Hunter and Tung Ngo returned to Labor’s Legislative Council ticket along with state secretary Reggie Martin, was the first under new rules designed to give rank-and-file members greater say in the preselection process.

Under a rule change steered through by now-Labor leader Peter Malinauskas when he headed the powerful Shop, Distributive and Allied Employee’s union, ordinary party members could vote in state and federal upper house ballots, with their votes counting towards a third of the overall result.

The other two thirds are split equally between union and sub-branch delegates.

But as InDaily reported last week, candidates in the Legislative Council ballot were told the party returning officer’s interpretation of the rule meant the rank-and-file vote would be weighted as a proportion of the total number of eligible members, potentially diluting the impact.

The interpretation was a blow to unaligned regional hopeful Ben Browne, but in the event he didn’t command enough rank-and-file votes to win a spot on the ticket either way.

But Penny Wong, the Left faction’s most senior SA parliamentarian, told InDaily the party must move “immediately” to ensure the same rule could not be applied the same way in subsequent elections.

“Party rules were changed to give members a greater say in the preselection of Labor’s candidates for parliament – Labor Party members will be rightly disappointed that the rule has been drafted and interpreted in a way that undermines that intention,” she said.

“While it’s clear this hasn’t impacted the outcome of this ballot, the interpretation of the rules in a way that diminishes the value of the votes of Party members is perverse.

“As Peter Malinauskas has said, the Party must act immediately to ensure the rules are amended to fix this perverse outcome.

“I look forward to working with him to ensure this is done.”

The text of the rule, as shown to InDaily, appears poorly drafted, with numerous typographical errors including one referring to “25 per cent” instead of one third and another assigning the wrong bullet point number to the inserted new rule. Most significantly, the wording of the rule relating to the rank-and-file vote is phrased differently to that of the union and sub-branch components. 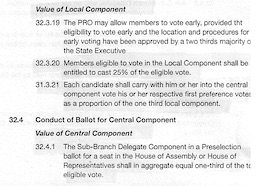 An excerpt from the relevant rule (above) and (below) the wording for the union component.

Labor can’t change its rules until the next state convention, expected to be held early next year. It’s unclear whether further ballots to determine the rest of the Upper House ticket and, more significantly, the next Senate ticket, will fall before or after that.

It’s understood a meeting of the ALP state executive today resolved to review last week’s ballot and the application of the rule changes.

But the process has proved significant for the Left faction, which plays second fiddle to the dominant Right in the party machine – but whose two candidates garnered a significant majority of the grassroots vote.

While Right-wingers Martin and Ngo won the sub-branch delegates ballot, and the unions split their support between Maher and Martin, Maher and Hunter easily won the rank-and-file vote, with 648 and 414 votes respectively.

“It just conforms the rank and file naturally lean Left, and the stronger unions pull us Right.”

Another insider dubbed it “an outstanding result”.

“What it shows is the active branch membership throughout the Labor Party is overwhelmingly inclined to support Left candidates,” they said.

“Ultimately [the new system] is a remedy to branch-stacking.”

But others in the Left argue the strong result is reflective of a concerted campaign, which saw Wong petition grassroots members in mass-distribution SMS messages to back Maher and Hunter.

They also note Maher is a popular figure among the party’s rank and file, regardless of factional alignment.

Martin, who will remain state secretary until the state election, told InDaily: “Being the first preselections conducted under new rules designed to increase the say that rank and file members have, it is to be expected that a review of both the rules and guidelines under which these ballots were conducted will take place.”